AGRO IS TOXIC: Are we the country that consumes the most pesticides on the planet?!

In this first text of the special series “Agro is Toxic”, we talk about a matter of concern: Brazil stands out as the largest consumer of pesticides in volume on the planet 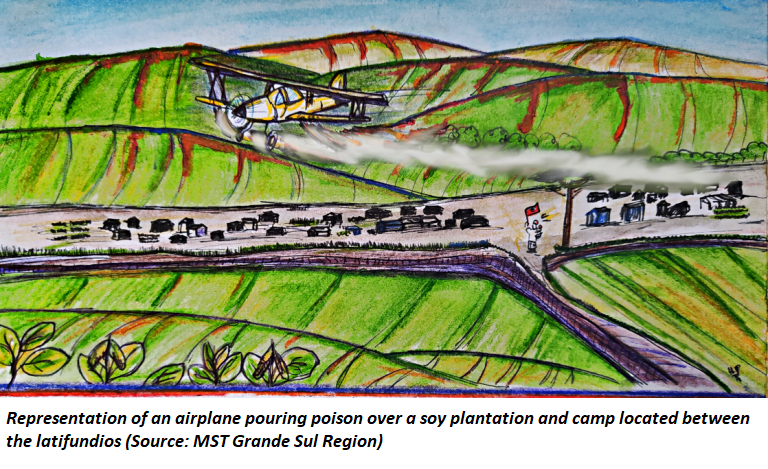 The year 2020 is almost over and is already considered atypical: the living and livelihood conditions of workers have been severely affected. Brazil has the sad record of 165,811 deaths from the new coronavirus until the date of publication of this text.

On the other hand, there are sectors of the economy and business groups that celebrate achievements and profits in this period. This is what happens with the agribusiness industry, which profited in this pandemic year, while the social crisis deepens: from January to July this year, the agribusiness GDP grew by 6.75% - a percentage that is equivalent to R $ 109 billion in income. The data are from the Center for Advanced Studies in Applied Economics (Cepea), University of São Paulo.

Along with GDP growth, agribusiness practices have been favored with the approval of hundreds of pesticide registrations for manufacturing and use in Brazil. From the beginning of the year until the end of October 2020, the government has released 343 pesticides for use in agriculture. The number - which is already high - is only lower compared to the same period in 2019: from January to October last year, 400 pesticides were released. The year of 2019 broke a historic record of approvals, freeing the manufacture, import and use of 474 products.

The National Health Surveillance Agency (Anvisa), points out that part of these new agro-chemicals should be reevaluated, due to possible links to cancer cases. Concomitant to this, the companies that concentrate in the production of poison, have already requested the release of another 216 products. 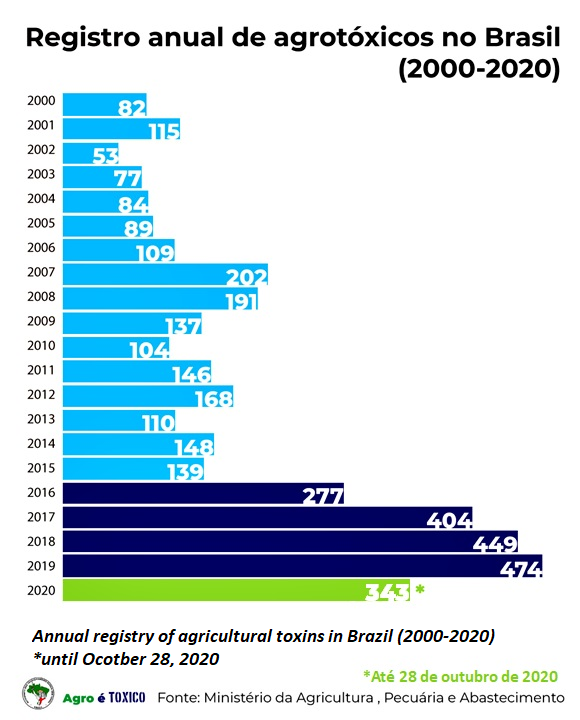 As reported by Agência Repórter Brasil (2020), among the approved pesticides are products that were banned in other nations, such as Fipronil, an insecticide banned in 2004 in France, Chlorothalonil, banned in the European Union and the United States, and Chlorpyrifos, banned in the European Union. These last two were banned because they affect the cells favoring the appearance of cancer, and for the neurotoxicity that affects human development.

Approvals were also possible because they were classified as essential activities during the pandemic. Licenses for manufacturing poison are distributed among 53 companies from 11 countries. However, unlike 2019, this year, the records are concentrated in the hands of Brazilian companies, especially AllierBrasil.

An inheritance to produce food profit

In Brazil, the use of pesticides was integrated into the 1975 National Plan for Agricultural Development (PNDA), which gave financial incentives to the manufacturing industries of these products, and contributed to the spread of the argument that the production of food on a scale would solve the problem of hunger in the world.

Today, Brazil is the third largest food producer in the world and the second largest exporter, behind only the United States. And even when leading these large-scale productions such as soy, corn and meat, hunger in Brazil has increased. Which raises the questions: what type of “food” is produced? Merchandise? For whom? With what nutritional quality? And at what cost?

According to data from the Brazilian Institute of Geography and Statistics (IBGE) released in September this year, hunger, severe food insecurity, reached about 4.6% of the population between 2017 and 2018. There are more than 10 million Brazilians with less than necessary to meet nutritional demands. This survey was published five years after Brazil left the hunger map. Statistics that the country has been rapidly approaching with the dismantling of food security policy.

Another argument in favor of pesticides, defended by transnational corporations, is that this represents the modernization of technology and agriculture. When investigating the theme, it is clear that the application of pesticides in agribusiness is more than a technical improvement. It is a political and economic articulation between landowners and transnational chemical and biotechnology industries that work for the market, which increases the profit rate and the global political power of these conglomerates.

In Brazil, there is an articulation that becomes clear when we look at the financiers of the Parliamentary Front of Agriculture, better known as “ruralist bench”. These congressmen receive funds from Instituto Pensar Agro, financed by 38 agribusiness associations - conglomerates that concentrate control of this branch in the country and in the world. The following infographic shows the 12 associations that have the greatest influence on national politics. 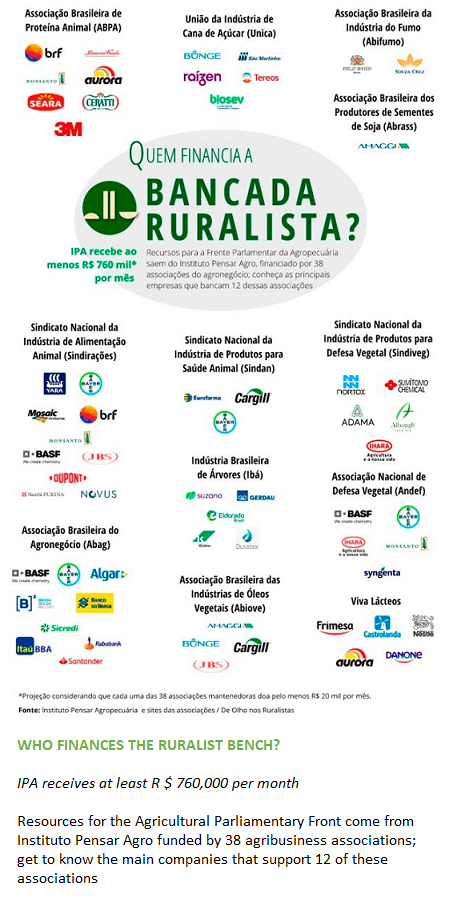 Brazil: The largest consumer of pesticides

The Atlas Geography of Pesticide Use in Brazil and connections with the European Union, organized by Larissa Mies Bombardi of the USP Agricultural Geography Laboratory, in 2017 (and revised in 2019), presents the panorama of pesticides in Brazil. 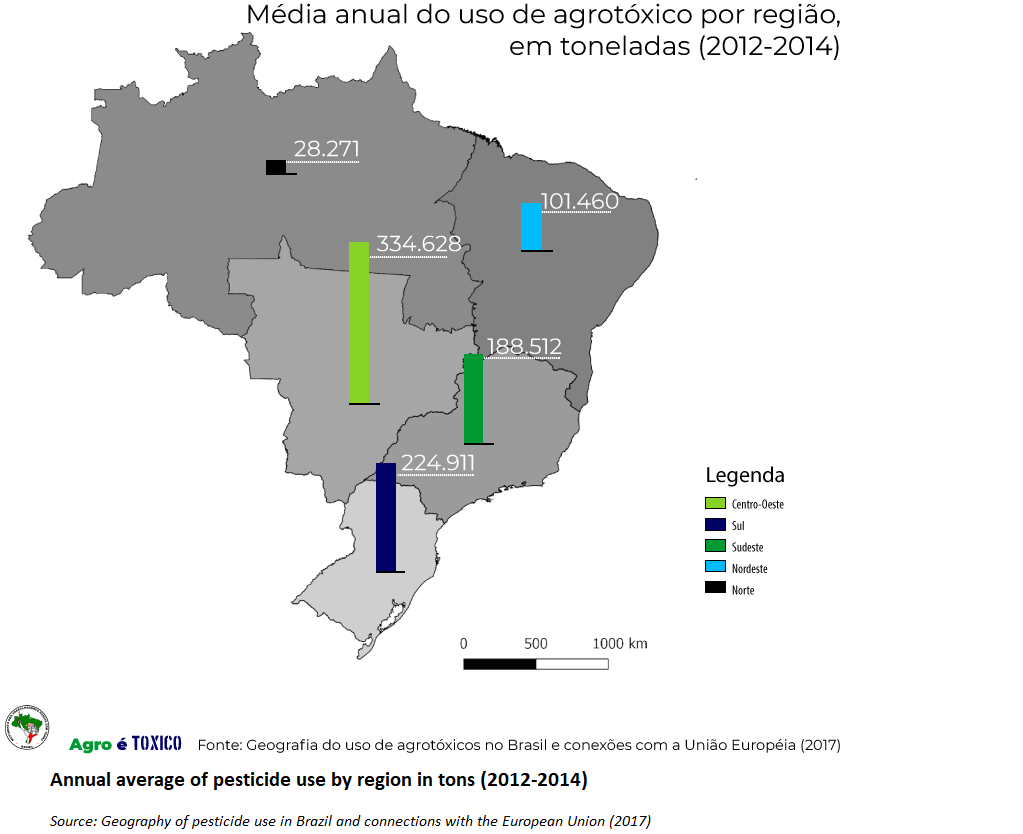 In 2017, with around 550 thousand tons of active ingredients, Brazil achieved the title of largest consumer of pesticides in terms of product volume on the planet ㅡ according to data from the Human Rights and Minorities Commission of the Chamber of Deputies, presented during a hearing in Brasilia in 2019.

Leonardo Melgarejo, agronomist and member of the Gaucho Forum to Combat the Impact of Pesticides, comments that there are studies that say the contrary, that Brazil is not the biggest consumer, and these studies are widely disseminated in institutional bodies, by the Parliamentary Agriculture Front (the ruralist bench) and the Ministry of Agriculture.

These “figures are based on [the sale and] the value of the agrochemical used per hectare”, which places countries like Japan in front of Brazil. We can have the false impression that these countries consume more poison, by spending more dollars on pesticides that are safer. “In this account, it seems that in Brazil less is used than what is used. We use more poisons and the worst poisons ,” warns Melgarejo.

The researcher highlights as reliable the method produced at the Federal University of Mato Grosso, by Wanderlei Pignati, who considers the main productive municipalities, the cultivated area of ​​the main crops and the information on the most applied products for the calculation. This allows an average to be extrapolated to the entire cultivated area, and the missing data on illegal sales of pesticides are estimated. This estimate is “one billion liters of pesticides per year. It gives about 30% more than the sales recorded by Ibama,” he says.

Melgarejo observes that the relaxation of the legislation has increased the carelessness with the information and consequently the contamination. A recent example is the case of Paraquat, banned in 2017 by Anvisa, with a three-year period for withdrawing the product from the Brazilian market. In September 2020, the product should be banned and deleted from all shelves. Contrary to its previous decisions, Anvisa gave in to pressure from agribusiness and authorized the use of Paraquat stock.

Understand a little more: what are pesticides?

According to decreto nº 4.074, de 4 de janeiro de 2002, pesticides are products and components resulting from physical, chemical or biological processes. Intended for use in the sectors of production, storage and processing of agricultural products, in pastures, in the production of native or implanted forests. They are also used in other ecosystems in order to change the composition of flora and fauna, in order to preserve them from the harmful action of living beings considered harmful. They are also known as defoliating substances, products, desiccants, stimulants and growth inhibitors.

A 2019 Anvisa regulatory framework changed the toxicity classification of pesticides, adopting the international standard, with five divisions, the Globally Harmonized System of Classification and Labeling of Chemicals (GHS).

In this new standard, only those products that cause death hours after contact or ingestion by the individual are considered extremely toxic poisons. “Low toxic” pesticides will no longer have the risk warning on the label. Thus, of the pesticides approved at the beginning of the year, only six products had been classified as extremely or highly toxic. We can see this new classification in the infographic. 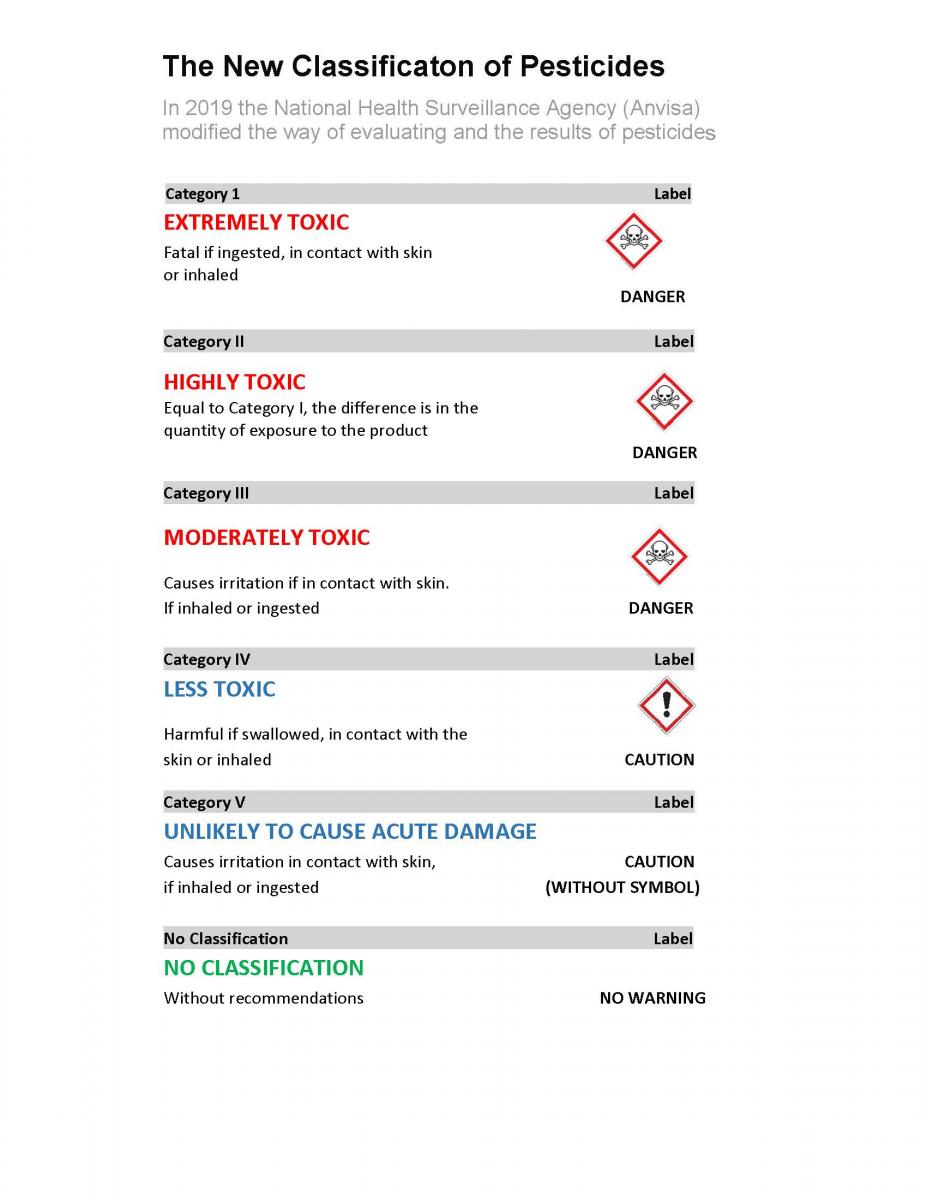 The poison hangs in the air

Any product that is toxic to agriculture and livestock can be considered a pesticide. Leonardo Melgarejo points out that pesticides can be plant extracts, as well as chemical synthesis. The latter is what predominates in agriculture today, and are formulations developed in laboratories that generate xenobiotics.

These substances have a specific purpose, such as killing a certain insect, however they have collateral actions. An example of this side effect cited by the agronomist, is the “struggle of grape producers against soy producers, when soy producers use 2,4-D, which is a herbicide to clean their crops.” What happens is that this herbicide is adrift in the air, reaches the neighboring vineyards, and affects the production of grapes.

A similar case is reported by the settled farmer Maria Aparecida Mota Belarmindo, Cida, 43, a native of Paraíba, and a resident of the Olívio Albani Settlement, in Campo Erê, Santa Catarina.

She told us about the case that occurred in the region in 2007, in which farmers poured poison over the camp located between the landowners. “When we came here, they used to fly the poison, on their properties, we are right in the middle, and on all four sides there is a farmer. We denounced it to the Public Ministry, to Ibama, to the Environment Institute of Santa Catarina (Fatma), to everyone,” recalls the peasant.

She says that shortly after the application of the pesticides, many people became ill from having contact with the water contaminated by the poison. Part of the affected people were admitted to the hospital in Campo Erê and part in Palma Sola. Among the symptoms were diarrhea and vomiting. Cida recalls that the neighbors during this period continued to apply the poison until the end of the harvest, and after the case had repercussions, they started making applications with soil machines.

The peasant and settler reports that after a long period, even though there is no more application of poison by airplanes, the impacts of the persistence of pesticides and land poisoning are noticeable. "We planted the fruit and gave nothing, especially the grape vine, the grape, it did not because of the soy poison".

She reports that even with barriers against the poison, her neighbor followed the soybean plantation. “There was a time when my grapes didn't come because of that. Here in the settlement [now] it is forbidden to plant soybeans because of the poison, because it is much stronger, kills more, and brings other diseases and pests, ”he denounces. 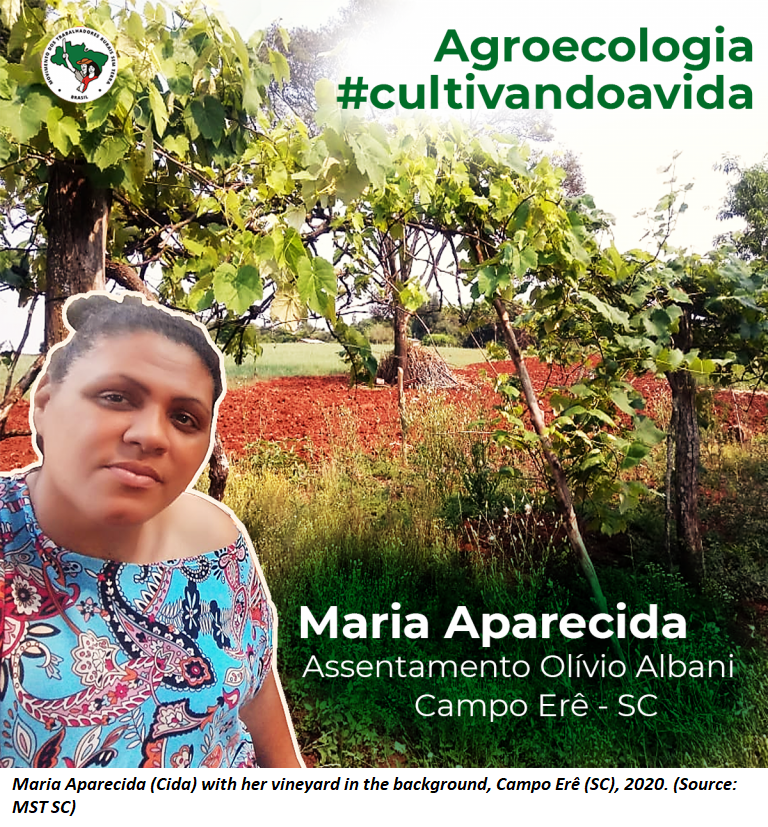 Cida and many other peasants and peasants who produce with agroecological methods and/or who are in transition are points of resistance that, in the midst of the contradictions of the system and the violence of agro-ore-business, flourish through their experiences anchored in a project of society and countryside that is popular and that respects the ancient ways of producing nature.

In this current scenario in Brazil, the debate on food production and the use of pesticides is constant within the struggle of the Social Movements for the right to food and Popular Agrarian Reform, which discusses agricultural, livestock, political, economic, social and formative issues of conception world, as a field project and society.

In this context, over the weeks we will publish the special “Agro é toxic”, with the aim of putting elements for the discussion on the national scene, the legislation on pesticides, health and contamination, and the counterpoint that has been built by the social movements of the countryside. field, through agroecology and Popular Agrarian Reform.

By Antony Corrêa, Jade Azevedo and Lucas Souza | From the communication sector of the MST Greater South Region | Edited by Ludmilla Balduino | https://mst.org.br/2020/11/12/agro-e-toxico-somos-o-pais-que-mais-consom...