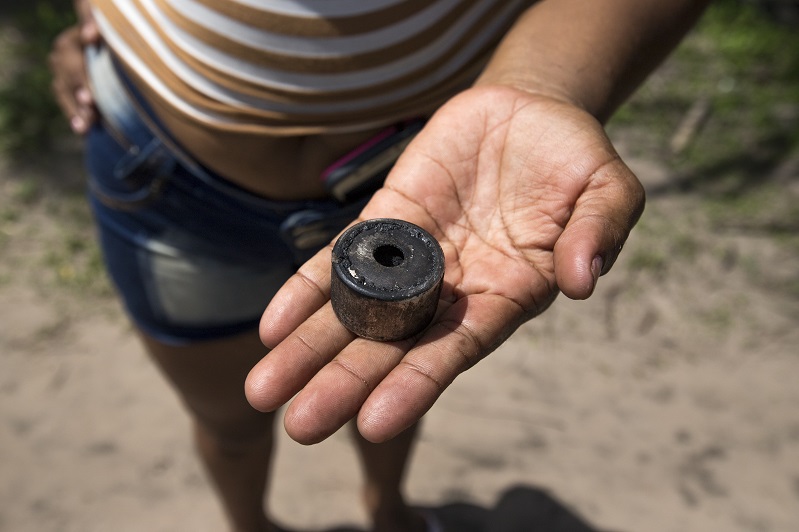 29 murders until December 2019 in conflicts in the countryside, according to partial data from the Pastoral Land Commission (CPT). Constant evictions have become reality once again in the Brazilian countryside, and even with 66 land reform settlement projects ready to be carried out in various regions of the country, the Bolsonaro government has not settled any families in these locations.

A report by the newspaper Folha de São Paulo showed that these 66 settlement projects correspond to 111,426 hectares for land reform in various regions of the country and would have the capacity to house 3,862 families. The area is equivalent in size to the municipality of Rio de Janeiro.

Through a press office, the National Institute of Colonization and Agrarian Reform (Incra) told the newspaper that “due to budgetary constraints in the year 2019, it was not possible to advance in the process of selection and ratification of families in settlements created by the municipality,” but that the program would be resumed in 2020. The modernization of the Agrarian Reform Project Information System (Sipra) was paralyzed by lack of money to hire a software company, which “represented a disruption in system improvement deals.” About this issue, Incra said that the update of the tool is "at a very advanced stage."

According to the report, in the last 25 years the average of the number of settlers is 54 thousand families per year, including 2019. The Bolsonaro government (without taking sides) has promised to distribute 600,000 land titles in four years. However, the reality in the Brazilian countryside has shown us the opposite of this.

Amazon remains focus of killings in the countryside

According to partial data recorded by the CPT, there were 29 murders in conflicts in the countryside between January and December 2019. 25 of them were in the Legal Amazon, 86% of the total. Pará, by far, leads the ranking with 12 murders, followed by Amazonas, with 5, and Mato Grosso and Maranhão, both with 3. Rural workers, landless and settled, among others, account for 21 on this path of death, which corresponds to 72% of deaths. 8 indigenous people have been murdered so far, of these, 7 were leaders. That was the highest killings of indigenous leaders in the last 11 years, according to CPT data. In addition to the deaths, the fire licks the forest in the heart of the capital over new areas for expansion. 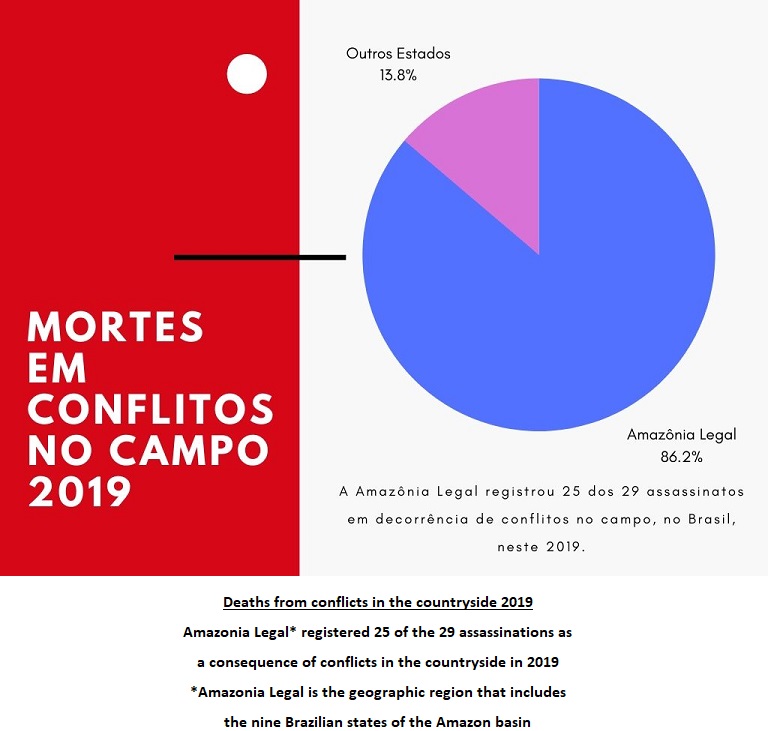 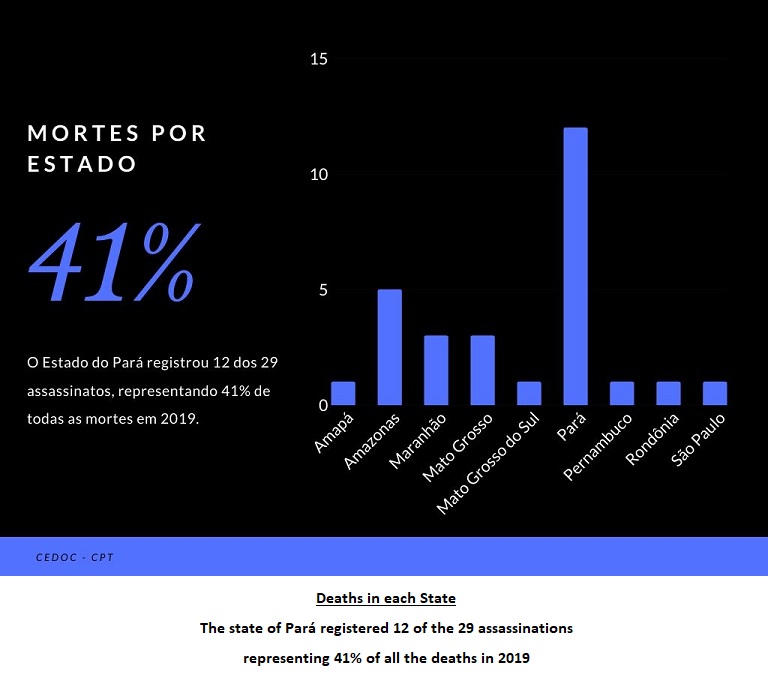 Check out the graphs below for the categories of people murdered in the field in 2019: 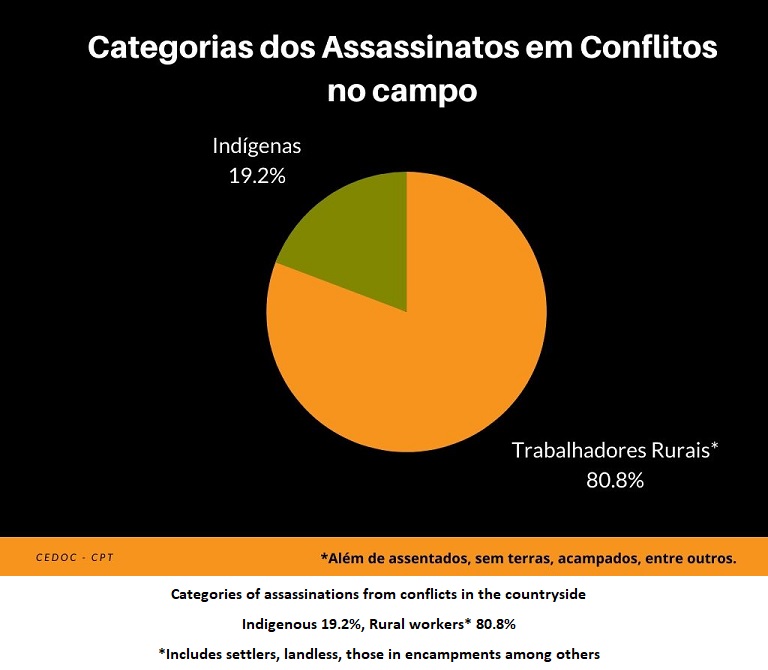 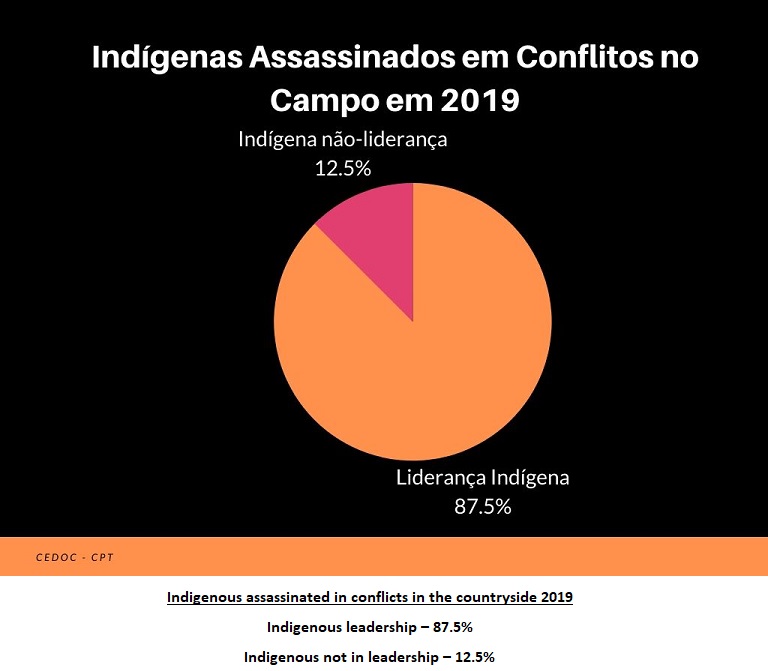 2019 was also the year we reached the milestone of 50 massacres countryside in Brazil since 1985. In these cases, 247 people were killed in ten Brazilian states. According to its methodology, Pastoral da Terra recognizes as "massacre" cases in which a number equal to or greater than three people were killed at the same time. In this type of crime, the state of Pará is also by far in the lead with 29 massacres, followed by Rondônia, with 7, and Minas Gerais, with 4.

The latest cases of massacre occurred this year in the municipality of Baião, Pará. On March 22, in the Salvador Allende Settlement, the leadership of the Movement of Dam-Affected People (MAB), Dilma Ferreira Silva, her husband, Claudionor Amaro Costa da Silva, and an acquaintance of the couple, Milton Lopes, were found dead at the entrance to the residence, which functioned as a market. Two days later, three charred bodies were found on a farm located near the vicinity of Martins. The farm is 14 kilometers from the settlement, where the first massacre took place. The victims were Marlete da Silva Oliveira and Raimundo de Jesus Ferreira, farm caretakers, and Venilson Da Silva Santos, the estate's tractor driver.

::. Visit the page created by CPT about the Massacres in the Countrside (in Portuguese)

Evictions keep in the violence high in the countryside

As regards territories, the Bolsonaro government's onslaught against communities, camps, settlements and traditional territories has increased considerably. In the state of Paraná, according to the Landless Rural Workers Movement (MST), in just over six months, nine evictions were carried out, leaving more than 450 families homeless and unsupported.

In Bahia, on November 25, 700 families were in the hands of the Military Police and the Federal Police, who used gas bombs, pepper spray, destroyed the houses and injured the workers of the Abril Vermelho camps, at the Salitre Project, in Juazeiro, Sr. Dorothy and Iranir de Souza, in the Nilo Coelho Project, in Casa Nova (BA). The violent evictions carried out by the Federal Police carried out repossession orders in favor of the São Francisco and Parnaíba Valleys Development Company (Codevasf).

On October 31, about 80 families from Camp Beleza, in the municipality of Aliança, Pernambuco, were evicted by riot police, bailiffs and the fire brigade. The action destroyed all the planting of workers, as well as their homes. The families occupied Engenho Beleza, unproductive, in 2015. The area was part of the Cruangi Plant. Since the beginning of the occupation, families have made the area productive, planting corn, beans, cassava, yam and vegetables, all in an agroecological way, in addition to building masonry houses. 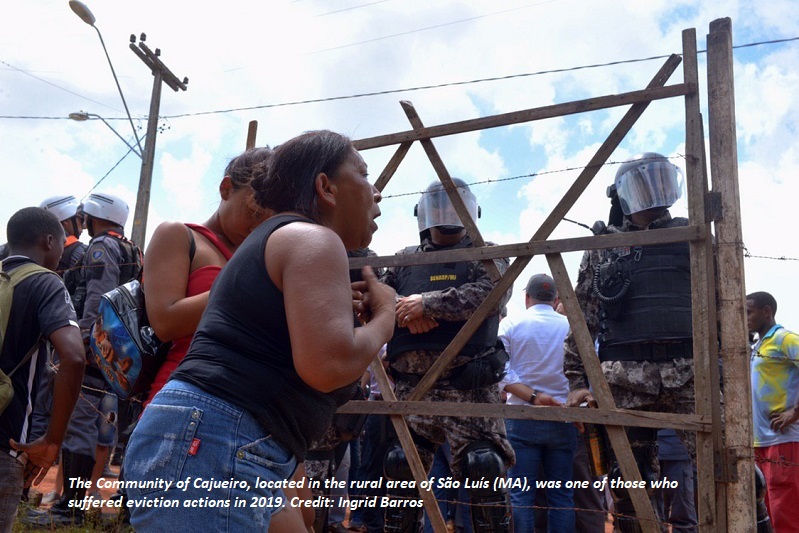 Also in October, on the 23rd, at the Redemption Forum, in Pará, the 2nd Public Hearing of evictions was held, referring to the Possession Reintegration Action of Fazenda Santa Lúcia, Pau D'Arco (PA), where 200 families have liveed since 2013. At the scene, in May 2017, a Massacre killed one female worker and nine rural workers. In this 2nd Hearing, the Chief Judge of the Agrarian Redemption Court, Dr. Haroldo Silva da Fonseca, upheld the decision to evict the families. This eviction should take place from January 27 to 31, 2020, by the PM Special Mission Command, if families do not vacate the property peacefully.

On August 12, part of the Community  of Cajueiro in the rural São Luís, Maranhão, was evicted. Families had occupied the area for several generations. 21 houses were broken down, without due formal notification in compliance with the decision of the State of Maranhão Public Security Bureau to those injured, at least 48 hours in advance, which should include the exact date and time when the eviction would be performed. There was also no preparatory meeting with the Community for the removal of their belongings, which would avoid witnessed conflicts. Nor was there prior notification of the relevant bodies and entities, such as the Public Prosecution Service, Incra, Incra Regional Agrarian Ombudsman, State Agrarian Ombudsman, Public Security System Ombudsman, Human Rights Commissions, City Hall, City Council, Brazilian Bar Association, Agrarian Police Station, Public Defender, Guardianship Council and other entities involved with the agrarian/land issue.

Also during a peaceful demonstration by the Community of Cajueiro families and supporters at the door of the Palace of Lions, headquarters of the state government of Maranhão, a large police force from the Flávio Dino government's Shock Battalion (PCdoB) fired gas bombs at people, violently and arbitrarily.

These are some examples of the hundreds of threats and violence against peasant territories in 2019. And 2020 still has no better picture.