When COVID-19 became a pandemic, many of us believed this would be an opportunity for humanity to revise the principles that guide the 21st century. It would be time to affirm that access to healthcare for all is more important than the profits of banks, that we need ventilators more than smartphones. We thought it would be a time to affirm that international cooperation is more efficient for producing vaccines than the free market and that food produced by peasants is safer and healthier than that produced in laboratories and factories. We may have been naive in not considering that this pandemic occurs precisely at a time of structural crisis in capitalism. 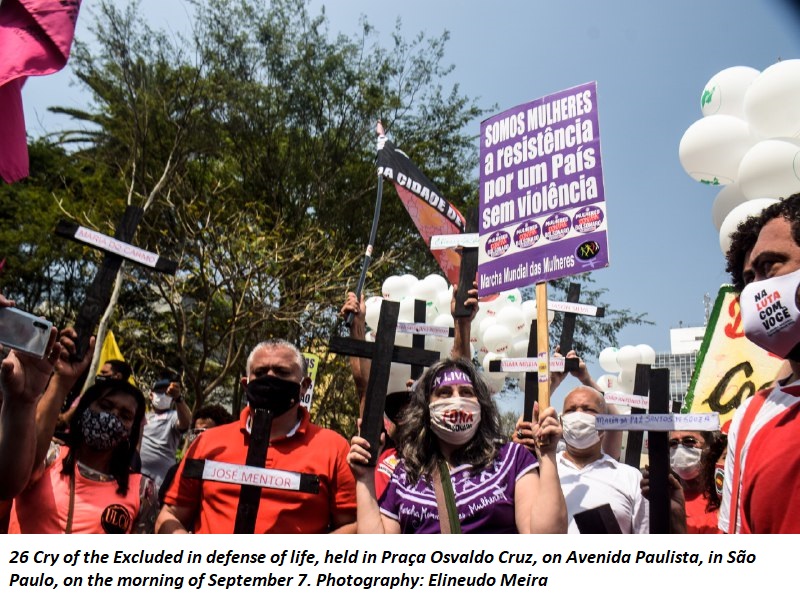 In this century, we have seen how speculative and financial capital has become the dynamic center of the system, making crises more frequent and destructive. At the same time, we have seen how capital’s appetite for destroying the environment has only grown. It commercializes all dimensions of life, producing ephemeral goods that require almost immediate replacement. This is now reaching far more catastrophic proportions. This must also be understood in the context of a geopolitical dispute with the emergence of a bloc led by China in opposition to the United States.

However, it’s important to note that it’s different from the Cold War of the past century, in which the United States sold an “American dream” or the American way of life, spread by Hollywood and its portrayal as a great “middle-class nation.” Despite this, they weren’t able to deliver this dream. The great news of the Donald Trump Era is that the United States has nothing to offer humanity. There is no project. There is no ideological dispute or conception of society. The Trump Doctrine is just the parasitic exercise of US power because they can, and they want to.

It is still impressive that it has nothing to offer even to those who submit to this project. In this case, we are referring to the Brazilian elite. Captain Jair Bolsonaro has a deep passion and admiration for the United States and, especially, for Donald Trump. It is not ironic. It is coherent even with his low intellectual formation. However, his Minister of Economy, Paulo Guedes, a Chicago Boy, or the president of the National Congress, Rodrigo Maia, are not driven by adolescent passions. There is an ultraliberal project to lead the country that requires an authoritarian government to impose its anti-popular measures.

Since before his election and even after that, the Brazilian financial, industrial, or agribusiness sectors never reprimanded Bolsonaro for his sexist, misogynistic, homophobic, racist, or belligerent opinions. Although a certain liberal opposition, expressed in some media, has expressed its disapproval, no business person has ever criticized the president. The important thing is that Bolsonaro continued the project that started in 2016 with the overthrow of President Dilma Roussef.

Perhaps no country in the world has carried out so many ultraliberal reforms in such a short period as Brazil did in the last four years: a labor reform was carried out to eliminate rights fought for 80 years ago and to deregulate the forms of employment, allowing for “uberization”and the legalization of precariousness. There was also an education reform and the withdrawal of many important educational policies; a social security reform that increased the contribution time and which makes retirement impossible in practice; a political reform that prohibits legislative alliances and aims to eliminate small parties.

The essence of the project that brought Bolsonaro to power is the total withdrawal of the State from the economy and society so that private investments can occupy its place. This measure is evident, for example, in the environmental issue. For the second year in a row, fires are increasing in the Amazon and also in the Pantanal. Fires caused by agribusiness turn the forest into fields for soy and cattle. Although it is possible to identify the owners of the areas where deforestation occurs, no one has been arrested, and just a few have been fined. At the same time, Bolsonaro has already expressed to Al Gore, he wants the United States to exploit the Amazon. This is an opinion shared by General Hamilton Mourão, the vice president, and the Minister of the Environment. Currently, the country’s three largest private banks are already discussing how to exploit the forest in a private concession system.

With the pandemic, Brazil’s GDP was one of the most impacted in Latin America and around the world. The Brazilian economy has not grown for the last five years and would already go into recession if there was no pandemic. The combination of those economic policies with the pandemic has aggravated the country’s situation of social inequality. Compared to the same period in 2019, the drop was 11.4%. It is the worst result in the history of industry, services, and household consumption. Given this scenario, the State was expected to strengthen the economy, especially in a country with more than 12 million unemployed. However, the budget presented by the government for the coming year foresees cuts in the areas of education, health, science and technology, and public services.

Furthermore, it does not provide the continuity of the emergency aid that families in the worst conditions have been receiving during the pandemic. Along with the budget, the government presented a proposal to reform the state administration, which excludes the rights of public workers and facilitates the dismissal of these workers. The Armed Forces, on the other hand, will not only have their budgets increased, but have received authorization to expand their staff. With the financial-military alliance running the country, Bolsonaro can dedicate himself exclusively to his family’s political project of using the State to prevent the investigations and punishments of his family and friends in business related to militias from Rio de Janeiro.

It is in this complex framework that people’s organizations need to resist. It is a scenario of economic and social crisis, where individual outlets become more attractive and where the people’s struggle faces difficulties in organizing itself, given the limitations of social isolation and the State’s repressive apparatus. Military and federal police officers are a social base of Bolsonarismo and have been promoting strikes against progressive governors as a way to destabilize opposition governments. Since Bolsonaro’s election, police officers have felt “authorized” to commit abuses, as evidenced by the increase in death rates involving police in Rio de Janeiro and situations such as the surveillance of anti-fascist demonstrators by the Ministry of Justice.

It is certainly not a very encouraging picture. But at the same time, the conditions for sustaining this project are precarious and unreliable. Ultra-liberalism is unable to prevent an impending economic and social collapse, and it will be up to people’s organizations to present concrete solutions to this crisis. In this sense, the actions of solidarity that we have developed bring us closer to urban workers during this pandemic as well as when we support the struggle against returning to school, whether in the countryside or the cities. We could also highlight the food production, the organization of settlements, and our tree planting campaign as part of a larger project that we want to build.

We are not naive. We know about capital’s strength and offensive in this period. But we have always believed, always in human capacity and humanistic values. For this reason, we are still convinced that the period after the pandemic will be a time to reflect and rebuild the principles that guide human action such as cooperation between peoples, and humanity’s development based on a fair economy, an egalitarian society, and respect for nature and the environment.