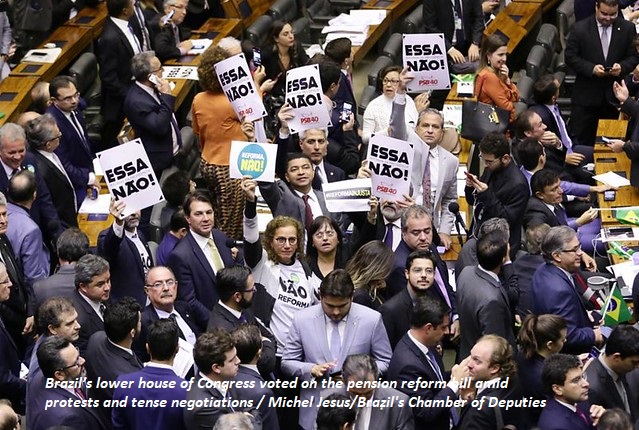 Brazil’s lower house of Congress passed the proposed pension reform bill in a first-round vote on Wednesday night, by 379 in favor and 131 against, as 510 of the 513 members of the house attended the session.

Left-wing and center-leftist parties protested as lawmakers from the Workers’ Party, the Socialism and Freedom Party, the Communist Party of Brazil, the Brazilian Socialist Party, the Democratic Labor Party, and the Sustainability Network voted against the overhaul. Voting in favor of the bill were 17 center and right-wing parties, including president Jair Bolsonaro’s Social Liberal Party, while the Green Party allowed its members to vote as they wished.

“It’s a shameful decision by a majority who voted based on the numbers only, disregarding the people. There must be a balance between the two sides, to prevent the medicine from turning into poison, both for the people and our economy. Unfortunately, that is not what we saw here tonight,” said the Leader of the Opposition in the lower house, Alessandro Molon, of the Brazilian Socialist Party, pointing out there are lawmakers who believe the pension system needs to change, but reject the rules proposed by Brazil’s far-right government.

Molon argued that the lower house will face the backlash “once the Brazilian people starts to feel the effects of the brutal measures passed” on Wednesday. “I am sure the house will be forced to review this decision later on.”

As it was passed, the bill raises the minimum retirement age in Brazil to 65 years for men and 62 years for women, and changes benefit formulas and transition rules for those who are working today. It also establishes an income floor of 60 percent of the average contributions paid by the retired worker, while delaying a full payout until 40 years of contributions.

“It’s the cruelest, most vicious overhaul a president has ever presented to this house. Not even the FHC [Fernando Henrique Cardoso] and [Michel] Temer administrations did this. Everyone wanted an overhaul. [Luiz Inácio] Lula [da Silva] did it, Dilma [Rousseff] did it, but no one has ever had the nerve Bolsonaro is having to break the constitutional order and make the most dramatic and comprehensive restriction of rights,” said lawmaker José Guimarães, of the Workers’ Party.

In the early hours of Friday, however, representatives deliberated on amendments to the bill that could help reduce the impacts in three cases: years of contribution for men and women, minimum retirement age for police officers; and the value of pension payments as death benefits.

The amendment that reduces the minimum years of contribution for men from 20 to 15 years was passed by 445 votes – the same change had been made for women when the bill was being discussed in a special congressional committee. In today’s vote, another victory for women: by 344-132, lawmakers lowered the minimum years of contribution to 35 for the full payout. For men, however, it will remain 40 years.

The amendment that sets a full minimum wage payout to dependents who don’t have another source of income in case of death of the pensioner was passed by 344-132. The bill previously established that the formula should consider the household income.

Finally, the amendment regarding police officers’ benefits – which will especially impact those who are close to retirement – was passed by 467-15.

The opposition firmly tried to delay the vote and used all house rules they could to stall it. In Wednesday’s session, a petition to remove it from the agenda, for example, had 334 votes against and 29 in favor, and three abstentions. But government allies pressured on the other side to speed up the process, with 353 votes in favor and 118 against a petition to end the debate and start voting, a score that can help gage how different forces would influence the vote.

The pension overhaul has been, up until this point, marked by political instability. While the Speaker of the lower house, Rodrigo Maia, is considered the ‘ambassador’ of the proposed pension reform in Brazil’s Congress in recent months, it has been a bumpy ride for the bill as the Bolsonaro administration faced a slew of troubles.

Problems in the government’s political articulation team, which has not been able to officially secure allies among parties in the lower house, and the unpopularity of the proposed overhaul were some of the main elements tipping the balance until Wednesday, as the swing votes among center and right-wing members of Congress were still unclear and the possible outcomes were still hard to foresee.

Over the past few days, both sides held several meetings backstage in Brasília to try to secure support. The government actually released three ministers from duty temporarily so they could return to their seats as members of Congress to secure three votes in favor of the pension reform bill: his Chief of Staff Onyx Lorenzoni, the minister of Tourism Marcelo Álvaro Antônio, and the minister of Agriculture, Tereza Cristina.

The government had made a similar move in the past to pass the bill in the special congressional committee that reviewed the draft.

Negotiations by government allies to try to convince representatives to vote in favor of the bill also included delivering more than R$2.5 billion (US$670,000) in federal funds to some members of Congress so they can decide how to use it in the first five days of July – something called “parliamentary amendment” (to the federal budget). According to NGO Contas Abertas, a public spending watchdog, it is more than what was released to lawmakers in the first six months this year – R$1.7 billion (US$450,000).

While the move has been used by previous Brazilian presidents in the past to make sure representatives would support bills, government critics attack the measure arguing that it goes against Bolsonaro’s campaign narrative, as he got elected with the promise of putting an end to “the old politics” and pushing for a new way of doing politics.

“This is the old, shameful politics of trading votes and favors. I am sure teachers, miners, street sweepers, and even police officers will remember that they hurt their retirement plans in exchange for this,” said congressman Glauber Braga, of the Socialism and Freedom Party (PSOL).

The PSOL and the Workers’ Party (PT) claim that funds were illegally granted to representatives and filed charges with the Federal Attorney General’s Office and the Supreme Court.

President Jair Bolsonaro responded to the accusations saying that the funds are part of amendments to the budget approved this year.

The voting on Wednesday took place amid protests against the pension reform bill outside the Congress building in Brasília, gathering public servants, members of people’s movements, and other actors.

Mazé Morais, the general coordinator of the Daisies’ March, criticized the fact that the activists were barred from accessing the building. “We repudiate this, they always claim this is ‘the house of the people.’ How come we, workers, don’t have the right to enter the building in such an important moment for our lives? We will stay here, resisting, fighting for our rights,” she told Brasil de Fato.

Rodrigo Maia, the Speaker, argued that the lower house has to “make sure the House is not broken into.”