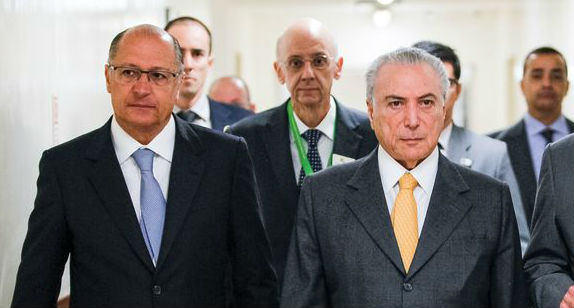 The interim president participated in the Global Agribusiness Forum and received a pledge of support from sectors of the Brazilian elite.

The acting president, Michel Temer, said on Monday July 4th that he is not afraid to propose unpopular measures "if they are to better the country."

"People ask me: ‘aren’t you afraid to put forward unpopular measures?’ No. My goal is not electoral. If I stay [president] for another two and a half years and get Brazil back on track, that is good enough for me. I want nothing more out of public life,” he said.

Shortly before making that statement, Temer had downplayed and defended increasing the salary for civil service employees that was passed in congress – a measure that will cost R$ 58 billion and which may affect this year’s fiscal budget, with a deficit of R$ 170 billion. "If we had not made that change... we ran the risk of strikes in essential sectors, something which would be very politically disastrous for the country," he said.

Temer attended an event called the Global Agribusiness Forum, organized by the agribusiness sector in São Paulo. When speaking about some of the measures he proposed taking, he cited examples such as the deregulation of fiscal budget, modifying the fiscal plan, limiting government spending (which would also include state spending), and the renegotiation of debt on the state-level.

Despite calling the country’s social programs "essential," Temer said that "profit is not a sin" and that "to recover jobs, we need industry to grow, we need agribusiness and trade to grow." The interim president received a paper that expressed support from Brazil’s elites – a pledge he said he will "frame" and hang up on the wall. The letter is signed by 45 entities, including the CNA (National Confederation of Agriculture).

"I'll frame this pledge and put it up in my office. This is a very important thing for us,” Temer said.

The event was attended by the Minister of Agriculture, Blairo Maggi, governor of São Paulo, Geraldo Alckmin, and governor of Mato Grosso, Pedro Taques, as well as other politicians.