Changes in the national system focused on taxing income and patrimony; cities and states would get R$100 billion 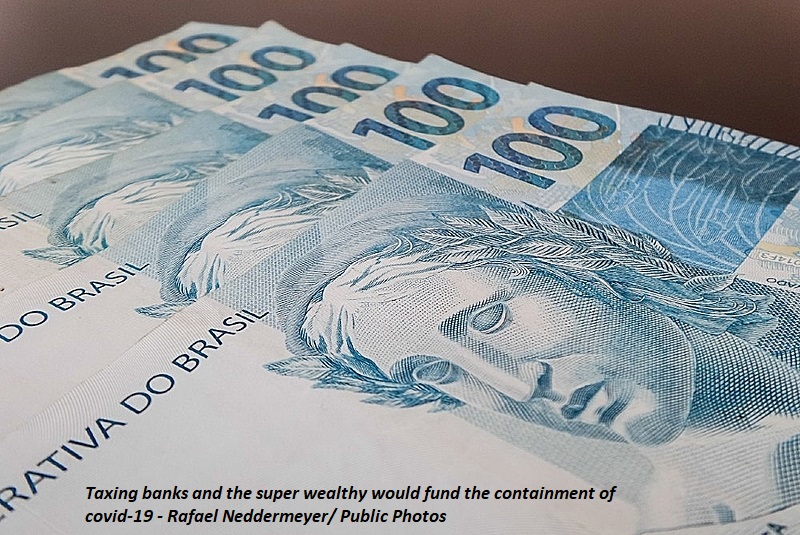 Entities involved in the fight for fiscal justice have come together to propose tributary changes, that may alleviate the economic crisis in Brazil amidst the coronavirus pandemic. In an open letter that is to be presented to Congress and the federal government, the group came up with a series of measures to tax banks and the wealthy, with this, raising funds that will help to contain the damage caused by covid-19.

The document was signed by important fiscal oversight institutions like the Fiscal Justice Institute (IJF), and the Fiscal Auditors for Democracy (AFD).

To sum it up, the idea is to change laws in order focus taxation on income and patrimony instead of consumption – currently, the former two represent only 23% of total tax revenues in Brazil. In Denmark, for example, that percentage is 67%; in the United States 60%.

“We have to take advantage of this moment to enact, due to an emergency, tax reform that tariffs the super wealthy. We are not inventing the wheel. We are looking at examples from England, Germany, the United States, Denmark, Sweden. None of these are socialist countries. They are important capitalist nations, that have adopted a tributary system whose backbone, is taxing income and patrimony”, explains Eduardo Fagnani, professor at the University of Campinas Institute of Economics, and one of the signatories of the proposal.

In the professor’s view, taxing only vast fortunes, like some congressmen defend, is insufficient. Today, four proposals of this sort are making their way through the Senate. “Taxes on large fortunes are important, necessary, but insufficient,” he affirms.

“It is important to suggest taxing large fortunes at the moment, to lay bare the extreme concentration of wealth we have in Brazil, and the potential solutions this concentration now offers to the current emergency. However, it isn’t a long term solution. The long term solution is to tax more fairly large incomes,” agrees fiscal auditor Dão Real, director of internal relations at the Fiscal Justice Institute and member of the Auditors for Democracy collective.

The group estimates that with higher tributes on banks and the super rich, 270 billion Reais per year will be collected – money that will go exclusively to the National Emergency Fund. Priority would be given to states and municipalities, who would receive R$100 billion from the sum.

Dão says he believes that this crisis is the ideal moment to effect changes in the Brazilian tax code. “I would say that, if we don’t do this now, at a moment like the one we are going through, and one which will be over in the near future, after which we will never be able to make these changes. This is the moment to mobilize,” he defends.

The auditor reinforces that pressure be put on the State to spend whatever is necessary to contain the coronavirus, while enticing them with the notion of how much tax revenue it can get taxing income and patrimony.

“At this moment in time, we have to pressure the State to spend all that is necessary, even if it raises the debt for now, and create new revenue streams so that when this crisis is over, in the future, we will see a different State, a recovered State, a State of well being, that is able to take care of everybody.”