The decision is based on the amount time they were incarcerated, since the members of the movement were imprisoned without evidence

A judicial decision published on the afternoon of Wednesday (May 17, 2017) ordered the release of seven people who had been held in custody for more than six months, in Paraná, under Operation Castra, of the Civil Police.

Fabiana Braga, Claudiri Lima, Claudir Braga, Antonio Ferreira, Daniel de Almeida, Tiago Ferreira and Valdir Camargo have been incarcerated since November 4, 2016, charged with the crime of being a member of a criminal organization. Both are members of the Movement of Landless Rural Workers (MST), encamped in the settlement of Dom Tomás Balduíno, in Quedos do Iguaçu.

The decision of Judge Ana Paula Ângelo, of the Criminal Law Court of the District of Iguaçu, was based on the excess of time, since the members of the movement were arrested without evidence being collected. The judge determined that the people will continue to be responsive to the case in freedom, with the fulfillment of precautionary measures, among them the monthly attendance in court.

People’s lawyer Fernando Prioste, who accompanies the lawsuit, highlights the long period in which people were pre-emptively held. According to him, a pre-trial detention should be the last measure applied, since prisons should only be used after some conviction.

"The fact that people belong to the MST and fight for agrarian reform cannot be used as a basis for the maintenance of pre-trial detention," he says. According to him, the stage of production of evidence has not started so far, by the defense.

Since it was launched, Operation Castra has been denounced by human rights organizations as an attempt to criminalize social movements. The operation became nationally known when police forces violently invaded the National School of the MST - Florestan Fernandes, in Guararema (SP), without a warrant for search and seizure.

The Brazilian Committee of Human Rights Defenders believes that preventive detention would be retaliation for the political action of the movement in the center-south of Paraná.

"The accusation against the members of the MST is linked to the landless identity, to acting as human rights defenders," says one of the texts.

Conflicts in the region

For years, the movement has claimed the griladas land[i] held by logger Araupel should be used for agrarian reform. About 3,000 families occupy part of the lands of the Pinhal Ralo and Rio das Cobras Farms in four camps: Dom Tomás Balduíno, Herdeiros da Terra de 1º de maio, Vilmar Bordim and Leonir Orback.

In 2015, the Federal Court ruled that the titles of Fazenda Rio das Cobras are null and void and belong to the Federal Government.

The region where the seven prisoners live has also been the scene of violence. In April 2016, two members of the MST were assassinated during a massacre promoted by the Military Police of Paraná. 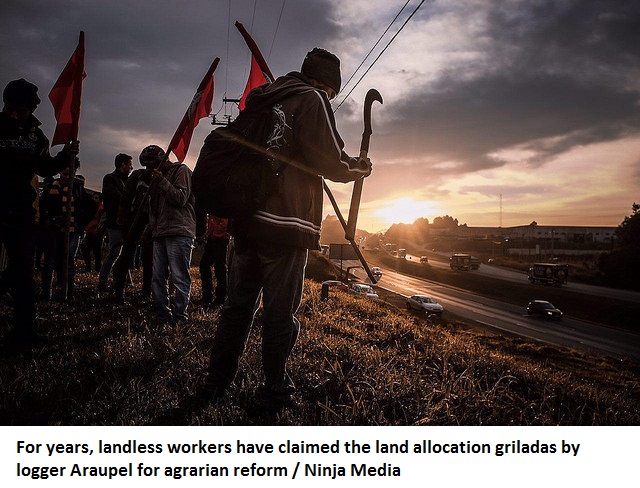 [i] “Griladas land’ is land obtained through the use of false titles.