The Court considered that the company claiming the land had already given up its possession at a conciliation meeting July 12, 2019. 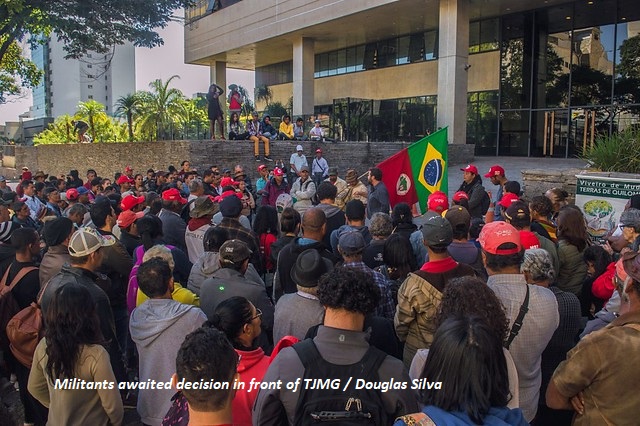 The Minas Gerais Court of Justice (TJMG) decided on Thursday (July 11) to suspend the reintegration of the Quilombo Campo Grande encampment, located in the municipality of Campo do Meio, in the south of the state.

[Read about the backround of these legal proceedings here.]

The encampment, where 450 families have lived and produced on the land for 20 years, was built by the Landless Rural Workers Movement (MST).

The decision favorable to the landless was signed by the judge Luciano Pinto. In the second instance decision, the magistrate considers that the bankrupt company of Companhia Agropecuária Irmãos Azevedo (Capia), who claims ownership of the land, had previously waived any eviction injunction at a conciliation hearing.

The hearing took place at the headquarters of the TJMG, in Belo Horizonte, where the landless militants staged a protest and followed the decision. The militant Débora Vieira, coordinator of the MST, celebrates the decision.

"We are very moved that the judge gave the decision of the land to be ours because the bankrupt estate had already made a previous agreement that it was not going to claim these lands anymore. Due to the suspension of the decree and the suspension of the reintegration of possession, we waited from November until today," points out the militant.

Luciana Ribeiro, who lives on the land, is also thrilled: "It is a conquest of enthusiasm, fruit of much struggle."

The claim for reinstatement was pending in court since last year and would be tried in late 2018, but has been postponed. More details on the decision coming soon.

Known as Fazenda Ariadnópolis, the area has been disputed since 1998 by the MST, which defends its destination for agrarian reform.

The Reintegração de Posse Action # 0024.11.188.917-6 was requested in 2011 by the bankrupt estate of Capia, former administrator of the Ariadnópolis Açúcar e Álcool S/A Plant. The case was in court for five years without any action, the process gained momentum after approval in 2016 of Capia's judicial recovery plan.

The company went bankrupt in 1996 without paying the labor rights of its employees – including payments to FGTS (a severance indemnity fund for workers) and INSS (social security). Approximately 140 of the families of Quilombo Campo Grande are former employees or children of former employees of Capia.

The argument of the company is that an investor would be willing to guarantee the productivity of the land. Today, encamped families already produce on the spot. In addition to coffee production, which last year generated 8,500 bags, in Quilombo Campo Grande are 1,100 hectares of various crops, such as corn, beans, cassava, peanuts, medicinal herbs, fruits, vegetables, among others.