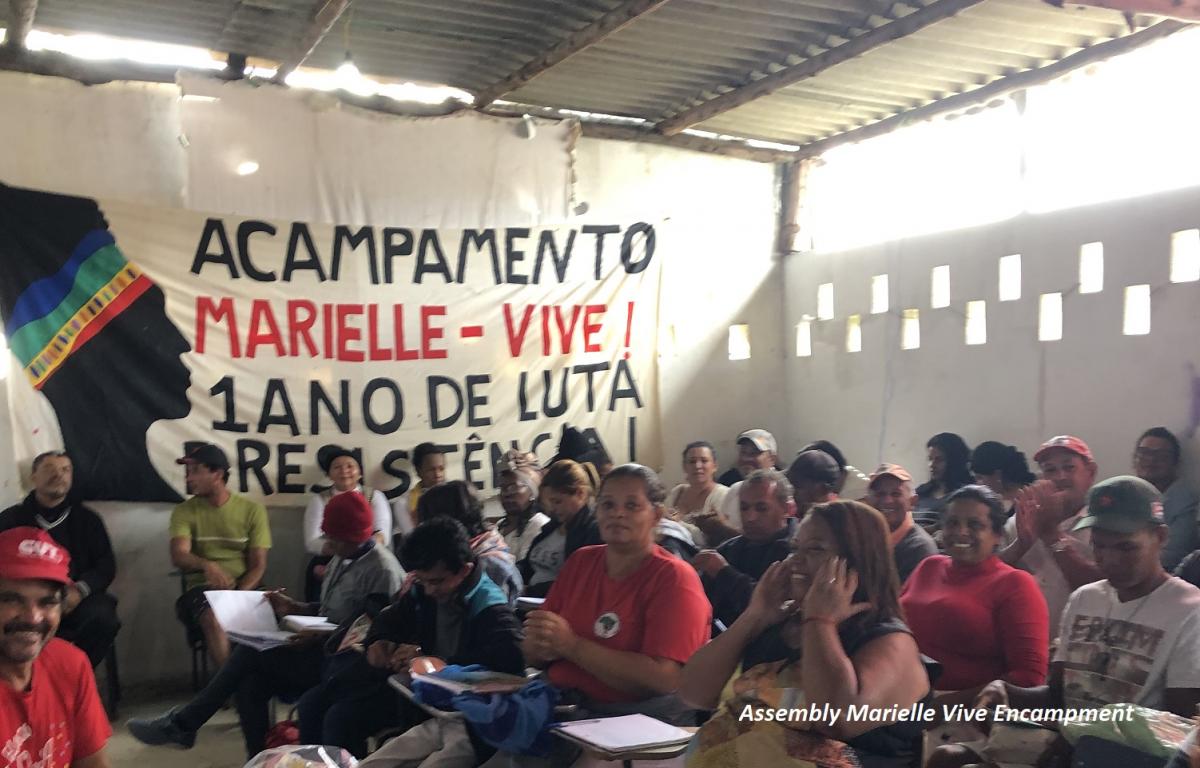 On March 14, 2018, Marielle Franco and Anderson Gomes were gunned down on the streets of Rio de Janeiro. On April 14, 2018, a determined group of landless workers began an occupation of unproductive land on the rolling green hills near Campinas, São Paulo state. The occupation established an encampment named Marielle Vive (Marielle Lives) in honor of the slain fighter for justice for women, Afro-Brazilians and the LBGTQ community.

Marielle was a city council member in Rio de Janeiro and was well known in the struggle for human rights. For more information on Marielle, check out these articles: “Marielle Franco Presente”: Global Protest Movements Denounce the Assassination of Brazilian Activist”; and “Marielle Franco: One Year After Her Assassination”.

While the occupation that established the Marielle Vive Encampment began at the time of Marielle’s assassination, in reality preparation started approximately five months before. During this period, militants from the MST in coordination with landless workers in the surrounding towns went door-to-door to discuss the possibility of an occupation and encampment on land that had been abandoned about 15 years ago on the death of the farmer who owned it. On April 14, 2018, 18 busloads of landless, one of the largest occupations in MST history, set down roots. 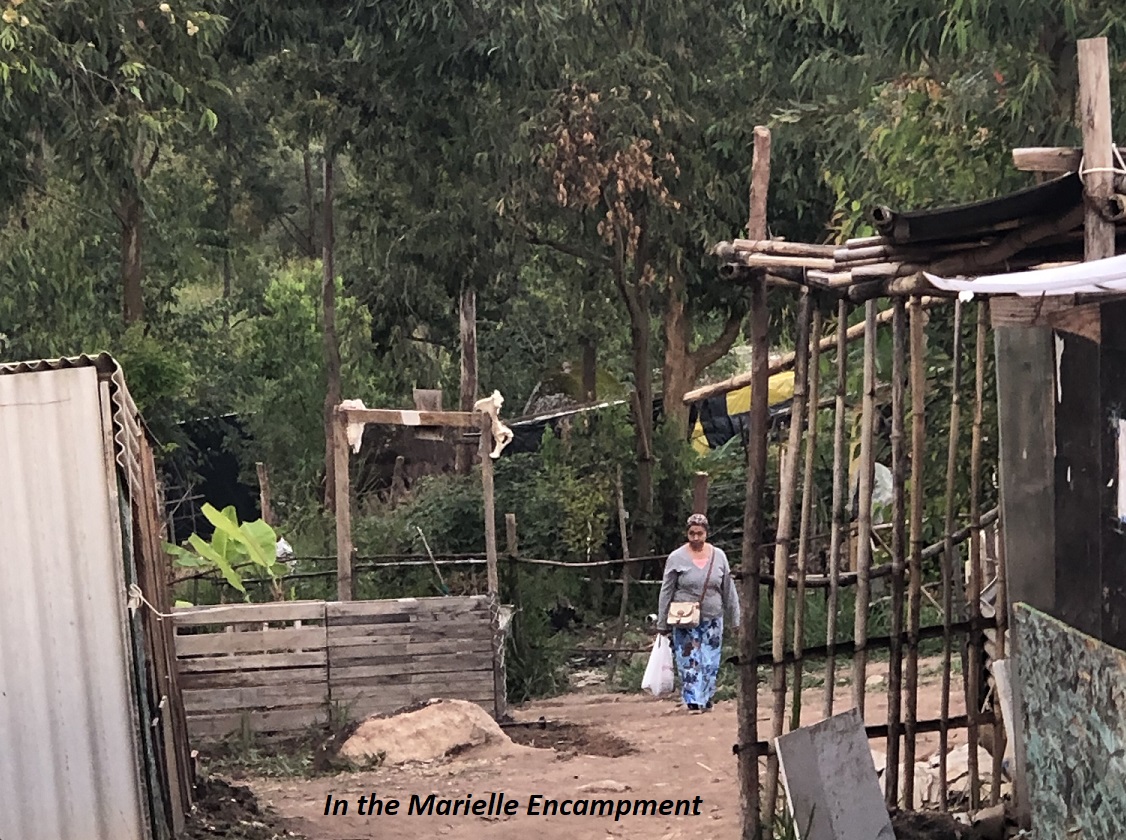 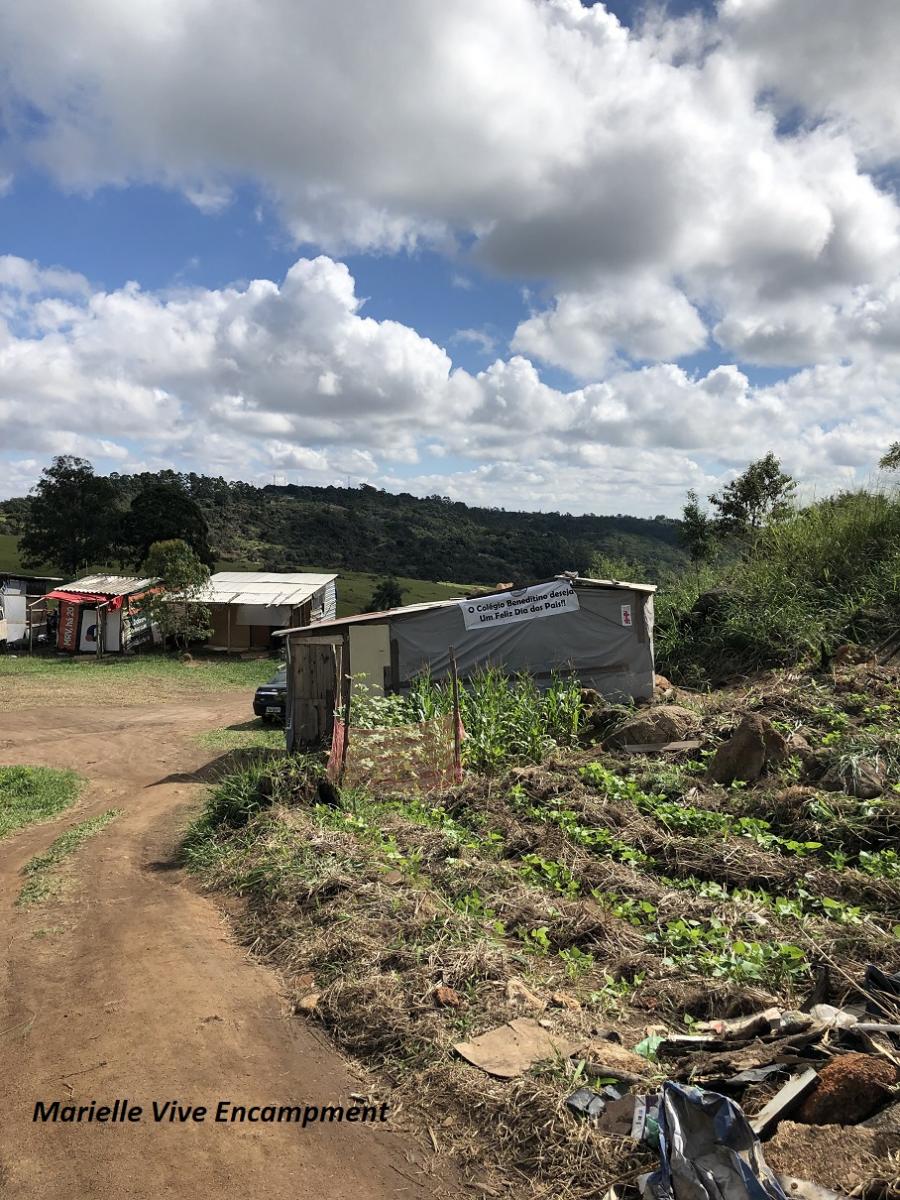 Now, a little over one year after its founding, the Marielle Vive Encampment has grown and developed substantially. Situated on approximately 250 acres, the encampment consists of 1,500 registered residents with an additional 400 people maintaining tents in solidarity. In December 2018, the encampment obtained a judgment permitting the occupation of these 250 acres. However, the application has to be renewed every six months and there is the regular threat of eviction. A relative of the deceased farmer stepped in to claim the title and is threatening to contest the encampment’s claim to the land. The 250 acres are surrounded by an additional 2,000 acres that the encampment wants as part of a settlement. Application has been made to include the entire parcel in the land claim. 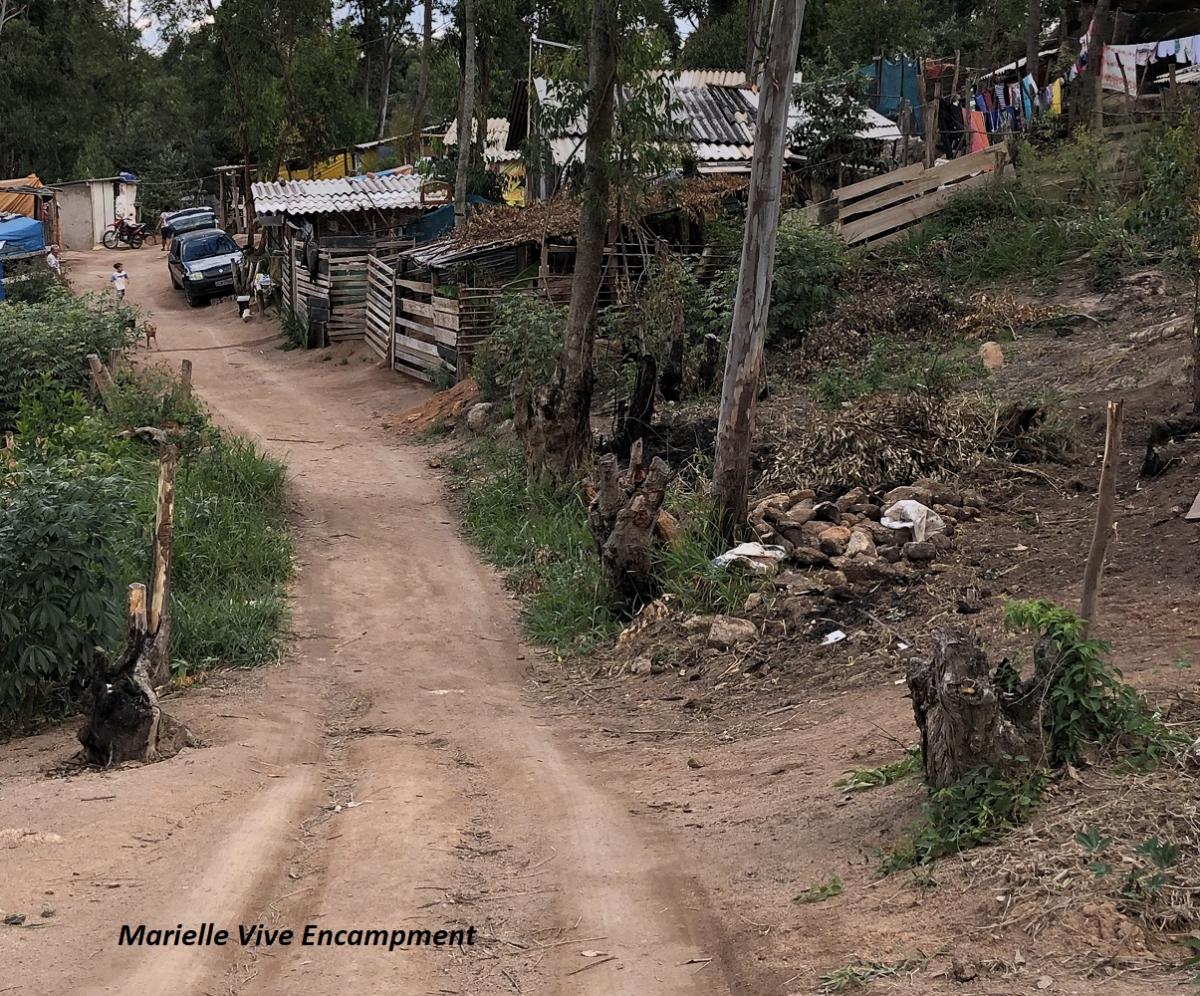 Given the limited space and the number of people, both tent and lot size is limited. The 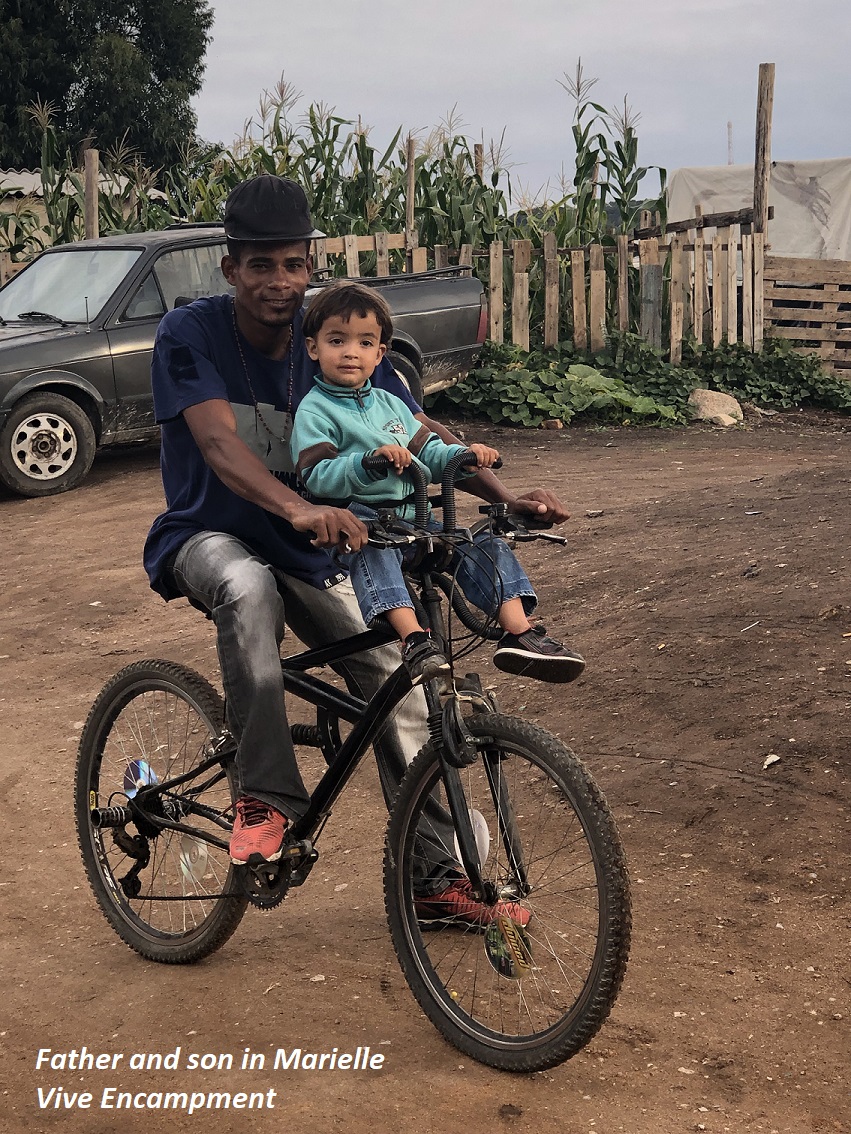 encampment has developed a number of gardens and other industries to maintain itself. There are several “stores” selling food and other necessities. Food sold at the stores that is grown in the encampment is tax free, but items brought in from the outside are subject to sales taxes. The land surrounding the current encampment cannot be farmed. 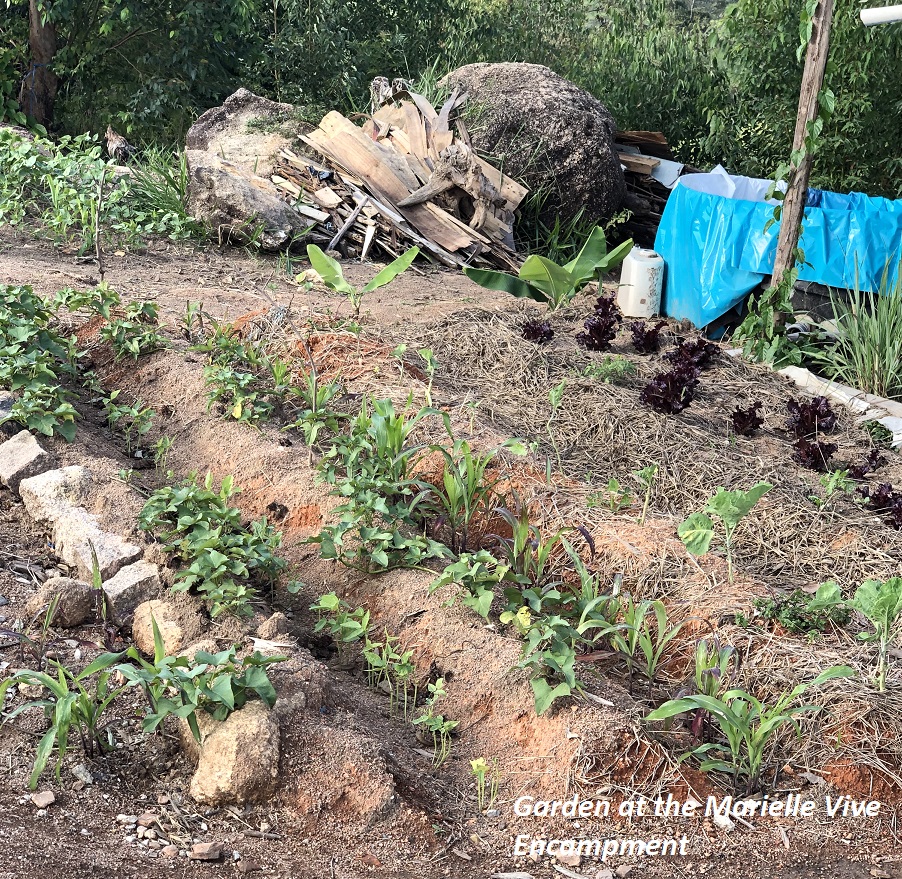 Security is an increased concern in the epoch of Bolsonaro, where attacks on MST encampments have occurred. Each encampment resident is issued a camp identification card. No entry to the encampment is permitted without identification and being registered as a resident. When leaving the encampment for work or shopping, residents turn in their identification and retrieve their Brazilian identity cards. There has been regular police harassment with the police telling residents that they have no right to be there. This is the reason that encampment identity cards are turned in to the security tent at the entrance to the encampment on leaving. If police find out that someone is a resident of Marielle Vive, they will confiscate and destroy water, food and other supplies that are being brought in.

We attended a meeting of Nucleo 32. The main topic for discussion was planning for Festival Junina. Festival Junina is also known as the Festival of St. John, which celebrates his birth. The festival also celebrates rural life with a type of square dancing, traditional foods, rural costumes and a bonfire. Different committees were formed to prepare the foods and other materials. 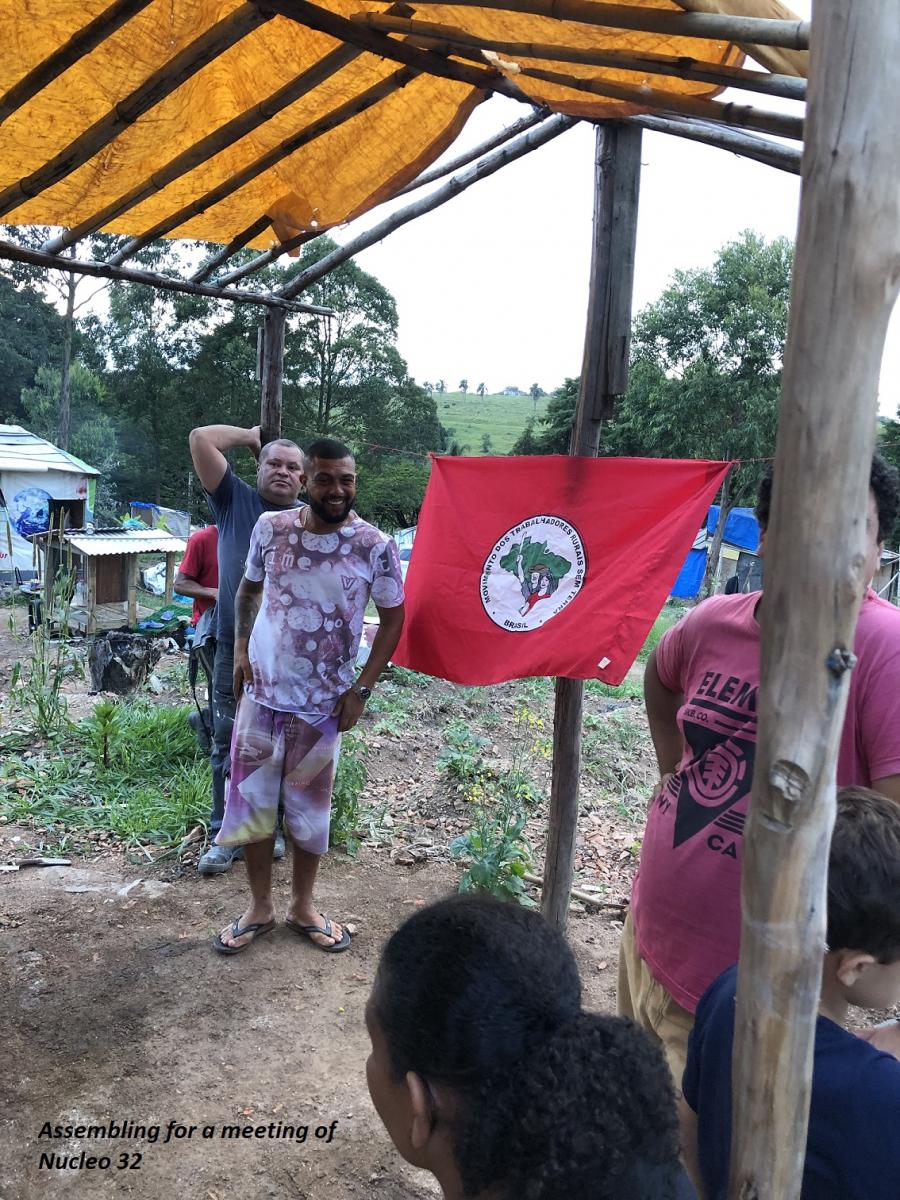 1.          Land: The earth and all natural wealth in our country should be under social control and should benefit all Brazilians and future generations.

2.          Natural Resources:  Water and native forests are assets of the natural world and they should be treated as a right of all workers. They cannot be treated as commodities and must not be subject to private appropriation.

3.          Seeds: Seeds are a patrimony of the people in the service of humanity and cannot be considered private property or be under any kind of economic control.

4.          Production: All production will be developed with the control of workers over the result of their work. The social relations of production must abolish exploitation, oppression, and alienation.

5.          Energy: We must find ways to develop people`s sovereignty over energy in every community and in all Brazilian municipalities. Develop in a cooperative way the production of energy at a local level, with the most varied sources of renewable resources in order to meet the needs of all Brazilians.

6.          Education and Culture: Knowledge should be a process of consciousness raising, liberation and ongoing cultural elevation of all people living in the countryside.

7.          Social Rights: The wage workers must have all their social, pension and labor rights guaranteed and equivalent to those of city workers and labor relations must be built on the basis of cooperation, social management and combating alienation.

8.          Decent Living Conditions for All: The countryside should be a good place to live, where people have rights, opportunities, and decent living conditions.

This is a summary of the program of People’s Agrarian Reform. For the full program, contract Friends of the MST at info@mstbrazil.org.

The Marielle Vive Encampment seeks to implement the principles of People’s Agrarian Reform through its use of agro-ecology in the small plots that are cultivated, through the social relations of respect, through basic democracy that develops leadership of the base, through respect for rural culture and through social cooperation and equality. 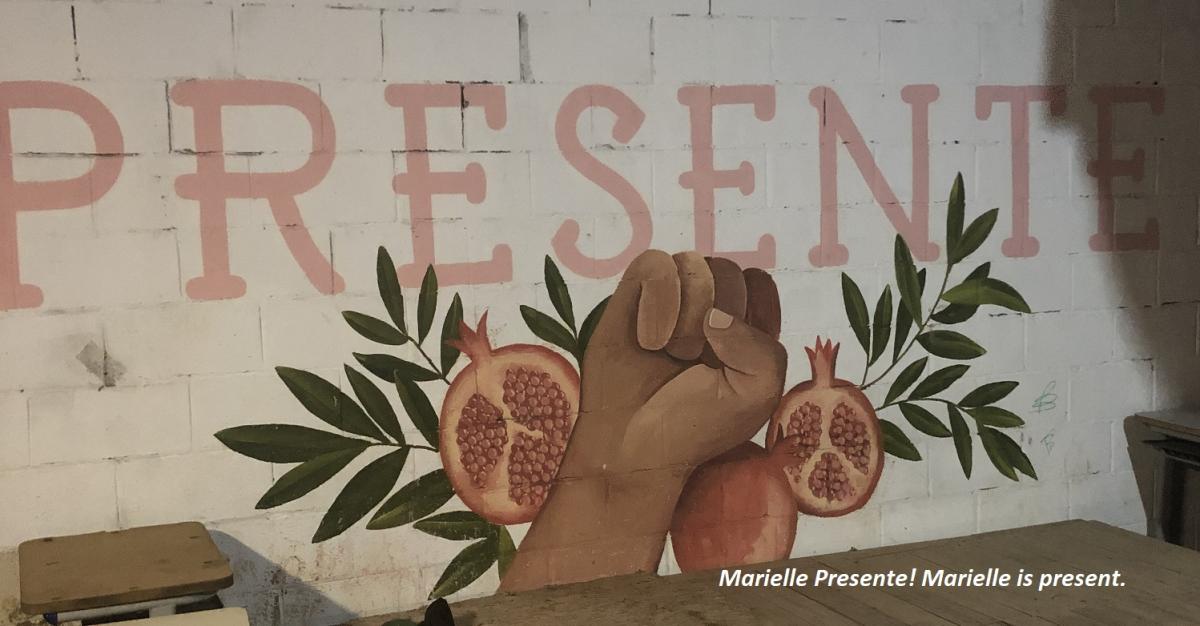