More Than 100,000 Protest Against Temer in São Paulo 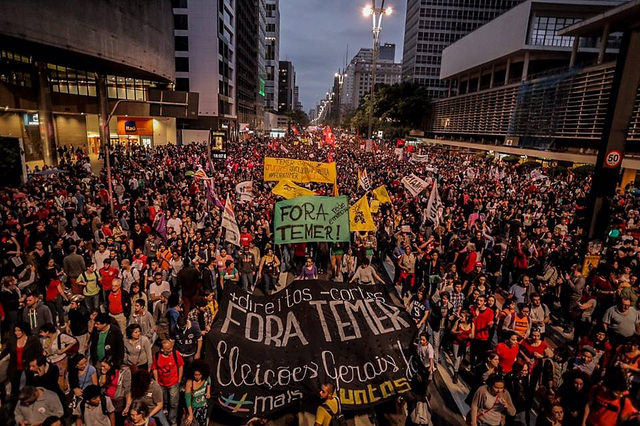 Over a hundred thousand people attended the protest against the Temer government on Sunday, September 4 on Paulista Avenue. The demonstration, organized as a united action by the Brazil Popular Front and People Without Fear, criticized the process of institutional breakdown in the country and the agenda to curtail rights announced by the PMDB.

Each of the fronts was formed by several social and people’s movements, trade unions, women's, student and youth organizations.

The protesters began to gather in front of the MASP (São Paulo Museum of Art) and from there went to the Largo da Batata in the West Region of São Paulo.

The number of people who attended the event was announced by the organizers. The military police did not release estimate.

The agenda of the protests was focused on criticism of Temer and his proposals.

"Who thinks [it] ended with the Senate vote is mistaken. The game just started, and will be decided on the streets," said Guilherme Boulos, the Homeless Workers Movement (MTST), which also questioned the legitimacy of the president to decide the political future of the country.

For the entities present, the impeachment, in addition to being illegal, carries a content contrary to the interests of workers. "After the legal farce, the coup is revealed in the attempt to liquidate of all labor, pension and social rights, in addition to the attack on national sovereignty with the privatization of the pre-salt," noted Julio Turra, National Executive of the CUT (United Workers Central).

The pre-salt (off shore oil) theme was also remembered by Cybele Oliveira, of the Oil Workers Union of São Paulo: "There are national and international interests in the coup. One is the pre-salt. We have the third largest reserves in the world. No one doubts the interest in oil in the Middle east, but here yes."

Gilmar Mauro of the MST national coordination (Landless Workers Movement), points out that, from now on, "we will have permanent demonstrations. Several categories will make mobilizations, have strike of bank workers, have National Day of Struggle for Agrarian Reform. This Is building the possibility of a general strike," he points out.

For the MST coordinator, "If the youth and popular movements are in the streets, if we can make a general strike, I have no doubt this will bring down the coup government of Temer" he declared. 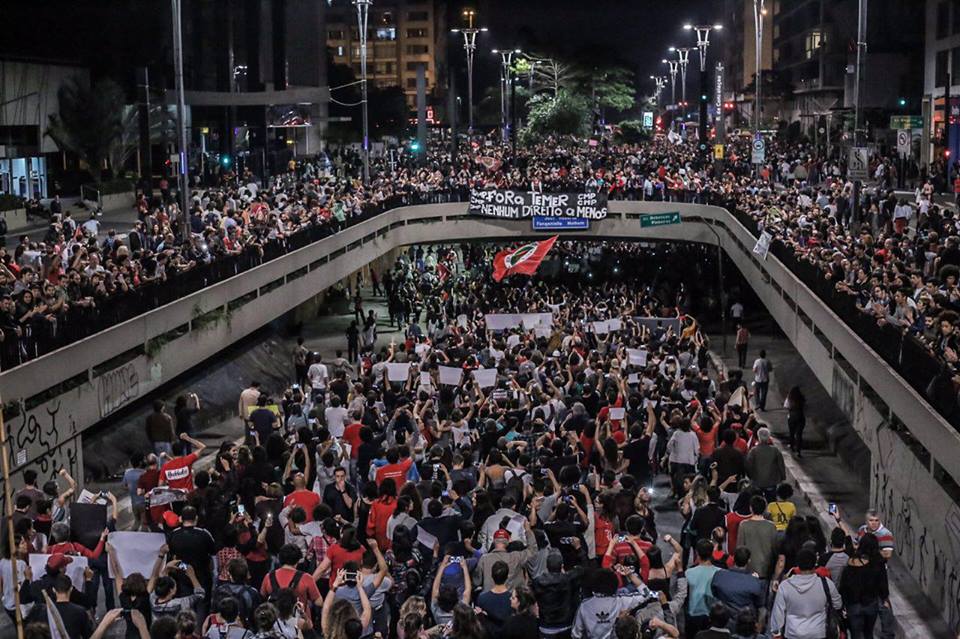 The protest had a massive presence of young people. In addition to the slogans against Temer, the military police was also heavily criticized because of the repressive acts over the past week.

Members of the Popular Youth Uprising carried a banner in solidarity with the a militant of the movement, Deborah Fabri, who lost her left eye due to a bomb fragment.

"Police violence leaves the bodies of the youth with the marks of the coup," lamented Barbara Pontes, of the Popular Youth Uprising. At various times, the protesters called for the demilitarization of the military police.

Along with young people, one could find older protesters, who compared the present moment in the country with the authoritarian context of the past.

"It's another embodiment, but it is a democratic break, which means, as before, an attack on workers' rights," said Valter Bridge, 63, legal analyst.

At the end of the demonstration, when most people were beginning to disperse the Largo da Batata, the military police clashed with protesters.

Before the demonstration in São Paulo started, 27 people were arrested at two different points of the city. They were conducted to Deic (State Criminal Investigation Department). According to lawyers following the case, the police have not yet presented the reasons for the arrests were made, but said they went to the demonstration on Paulista Avenue.

On Wednesday (September 7), Independence Day, held in São Paulo, at Praça da Sé, the Cry of the Excluded. Already on Thursday (September 8), Brazil Popular Fronts and the People Without Fear organized another major event in the city, in Largo da Batata.