Sovereignty Prize, awarded by the Community Food Security Coalition at its 15th annual conference, held this year in Oakland California.  The prize recognizes leaders in the global movement for food sovereignty. The movement works to ensure the right of all people to control their own food and agriculture systems in the face of a food crisis that has driven over a billion people into hunger worldwide.  The MST has been recognized as the 2011 Food Sovereignty Prize winner for addressing the extreme disparities in land access in Brazil by organizing over 350,000 landless rural families to resettle and farm formerly idle land.

This prize is a refreshing alternative to the World Food Prize created by ‘the father of the Green Revolution,’ the late Norman Borlaug,” says Christina Schiavoni of Why Hunger’s Global Movements Program. “The Food Sovereignty Prize challenges the notion that we can produce our way out of the current food crisis through technological packages or by focusing solely on food access.   With a billion hungry people in the world—the majority of whom are food producers and landless workers—we need a drastically different approach to ending hunger, one that is based on equitable distribution of resources, sustainability, and dignity for those who produce our food. The honorees exemplify this.”

This year the prize, awarded by a committee of nationally recognized food system leaders (information on the nomination and selection process can be found at www.foodsecurity.org) had the theme “From Panthers to Pitchforks.”   The keynote speaker was David Hilliard, one of the founders of the Black Panther Party.  Hilliard stated that while the Panthers were known for their militancy, it was actually their community service programs that struck terror into the heart of the US government and put the Panthers on the government target list. Hilliard spoke about the Panther’s connection to food – their early support for Cesar Chavez and the farm workers and free breakfast program for children.  Hilliard recounted how Huey Newton had told him that politics begin with a hungry stomach.  Hilliard described how the Panthers also distributed food to the community.  “We have always been involved with food because food is a very basic necessity and it is the stuff revolutions are made of.” 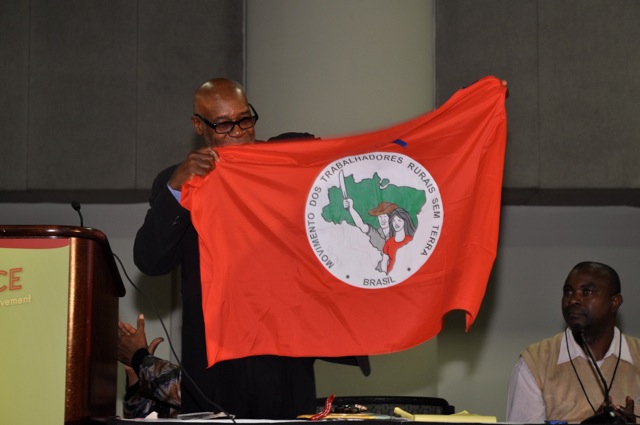 Elias Araujo and Janaina Stronzake accepted the award on behalf of the MST. Araujo thanked the Community Food Security Coalition and all those supporters of the MST. In describing the MST’s accomplishments, he acknowledged the role of all those who had struggled before them, including the Black Panthers.  Stronzake urged the crowd to “Globalize Hope, Globalize Struggle!” 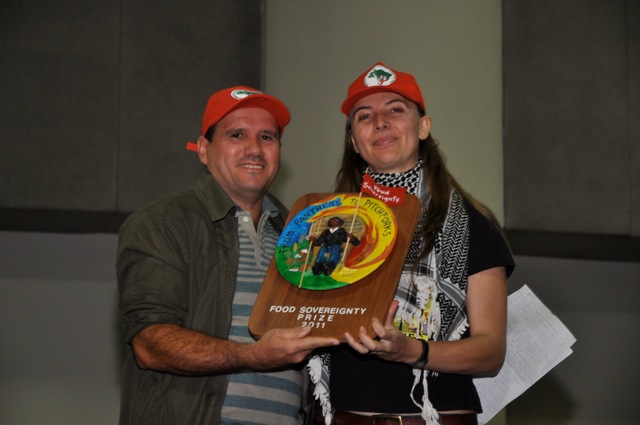 In making the award to the MST, the Community Food Security Coalition issued the following statement:

The Landless Workers Movement (MST) of Brazil has been a leader in social action for agrarian reform and food sovereignty for over 25 years. MST organizes landless workers to reclaim idle land, obtain legal title, and use the land productively. Through these efforts, more than 350,000 families have been settled on over 17 million hectares of land, with an additional 90,000 families organized in encampments and awaiting titles. These actions have called both domestic and international attention to unequal land distribution and to the need for agrarian reform, food sovereignty and gender equity. Additionally, the MST has established over 1000 schools serving over 150,000 students, and through its cooperatives has created 900,000 new jobs in the area of agriculture alone. In areas of MST settlements, social health indicators from infant mortality rates to school attendance tend to be exponentially better than in other parts of rural Brazil. Through international learning exchanges and service brigades, such as e.g., the MST inspires and shows solidarity with communities working towards food sovereignty across the globe.

By Jeff Frank with acknowledgement to US Food Sovereignty Alliance