The MST condemns massacre on Guarani Kaiowa lands in the state of Mato Grosso.

“The sugar cane, beef and soy of Mato Grosso are stained with the blood of the indigenous”, declares one passage of the statement. 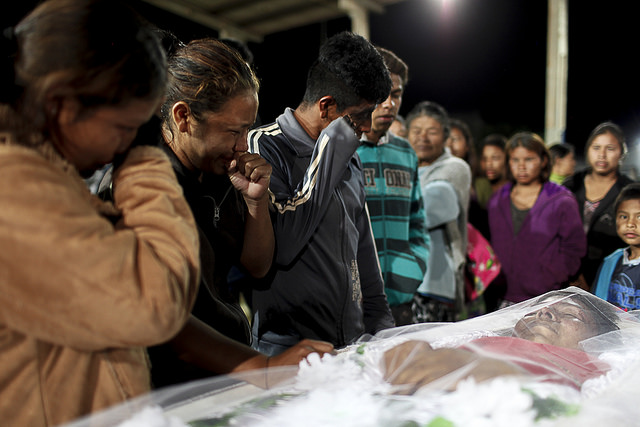 Last Friday the MST released a statement vehemently condemning the massacre committed against the Guarani and Kaiowa community in the interior of South Mato Grosso in which 20 people suffered gunshot wounds and an indigenous man, Clodiodi Aquileu Rodrigues, was brutally murdered.

“We condemn the daily atmosphere of terror, tension, pain and anguish created amongst the indigenous children and the elderly who live in this region”, says part of the statement. “The sugar cane, beef and soy of Mato Grosso are stained with the blood of the indigenous”.

MASSACRE OF THE INDIGENOUS IN SOUTH MATO GROSSO

There is an ongoing “extermination campaign” that aims to massacre the indigenous Guarani and Kaiowa people! We denounce the advance of the methods of production used by the agribusiness in the state of Mato Grosso as Agri-crime!

It was a cold sunny morning on the 14th of June in Caarapó. It should have been just another day of the week, but instead it was a day of terror: on the Yvu farm, indigenous families, among them women - some of them elderly - infants, children and men (human beings just like us) were reclaiming the land of their ancestors only for Brazilian soil to be once again spattered with the blood of our indigenous brother and sisters. On this occasion it was 26 year old Clodiodi Aquileu Rodrigues de Souza, father and health worker, who was assassinated during the extermination campaign by deadly gunfire. Or in the words of the indigenous “his joy was silenced”. In honour of his oath as health worker, Clodiodi went most courageously without hesitation to the aid of a fellow native who had been shot. Caught up in a hail of bullets he fell before picking himself up again to go on, only to drop down dead, his body turning red with blood in a matter of seconds.

Stationed at the site was a digger along with more than 160 pick-up trucks. According to the survivors, the murderers also attempted to throw the victims body into a ditch where all the belongings, food and clothing of the natives had been placed and set ablaze. Other natives succeeded in a courageous attempt to retrieve Clodiodi’s body but were shot down in a hail of lethal, high calibre bullets. Many of them remain hospitalized as a result of gunshot wounds to the head, chest or the abdomen – shots that aimed to kill them. The massacre resulted in more than 20 injured, among them a 12 year old admitted to hospital in serious condition having taken gunshot wounds to the liver and kidneys. Four adults were also admitted with equally serious injuries.

On the 16th of June Clodiodi was buried during a funeral filled with the rhythm of Mbaraka music and the indigenous customs of the Guarani and the Kaiowa, an occasion which saw tears, sadness and considerable outrage.

It is for these reasons that we condemn the intentional intervention of the government by way of paramilitary acts carried out by the agribusiness and the so-called “rural producers” with the explicit support of the media, in particular the subsidiary of Rede Globo – TV Morena which has taken the side of these murderers and distorts the truth of these events. We condemn the daily atmosphere of terror, tension, pain and anguish created among the indigenous children and the elderly who live in this region. No ranch-owners were injured and neither were they brought to justice. No police enquiry or even a spot report was carried out. It is the so-called agricultural exportation sector that is murdering the indigenous. The cane sugar, beef and soy of South Mato Grosso are stained with the blood of the indigenous.

Moreover we condemn the events of August 2015 when, at the time of the murder of the leader Simeão Vilhalva in Tekoha Ñanderu Marangatu, more than 26 paramilitary attacks against the communities of the Guarani and Kaiowa people were reported within the state of South Mato Grosso. There is clearly an attempt to do away with the Federal Constitution of 1988 and to undo the gains achieved through land occupations carried out by rural people, thus paving the way for landowners to act illegally, and yet with complete impunity, taking matters into their own hands by threatening these reclaimed lands and promising to kill more natives.

We stand in solidarity and pledge our support to our indigenous brothers and sisters. They know that every native death means the death of one of us, that the indigenous blood shed in this land is our blood. We are not going to lower our flags in the face of these deadly attacks, but become more resolute, more supportive with every drop of blood spilled and every tear shed. Far from being silenced, we dedicate ourselves to the fight!

Long live our Guarani and Kaiowa brothers and sisters! Their struggle is our struggle!