State-run company is selling 8 refineries, thousands of miles of pipelines, and fuel distributors 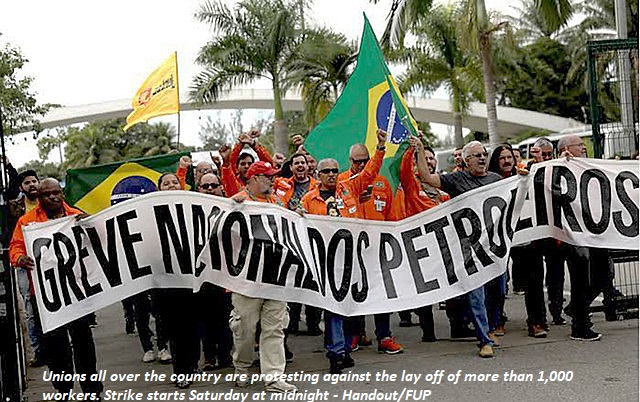 Workers at the Brazilian oil company Petrobras will go on an indefinite nationwide strike starting Saturday (February 1) at midnight, the Unified Federation of Oil Workers (FUP) and its 13 unions informed the state-run oil giant’s management.

The unions are protesting a plan by Petrobras to fire more than 1,000 employees who work at its Parana Nitrogen Fertilizer plant, and the company’s failure to comply with the collective labor agreement.

The Jair Bolsonaro administration’s policy, focused on selling state-run companies and shutting down strategic Petrobras plants, is having huge impact on oil workers. The company announced mass layoffs and actions that attack agreed rights, also affecting the Brazilian people and the development of the country.

The wreckage of the oil and gas production chain is one of the reasons keeping the country’s economy stagnant. Petrobras, one of the flagships of the Brazilian development, has cut investments in the country by more than 50 percent in recent years. While the company invested R$104.4 billion in 2013, by 2018 that figure had plunged to R$49.3 billion (roughly US$12 billion) -- a 53-percent nosedive.

Without Petrobras’ investments, the oil industry failed to generate more than R$100 billion (US$25 billion) to Brazil’s Gross Domestic Product (GDP) in that period. As a consequence, 2.5 million jobs were lost, which represents 19 percent of the country’s current unemployment rate. The Petrobras chain alone laid off 270,000 people, including employees and outsourced workers.

Gas, LP gas, and diesel price hikes are also part of the plan to dismantle Petrobras. Its managing board not only changed the way prices of oil derivatives are adjusted, but they are also selling eight refineries, 13 terminals, 2,226 kilometers (1,383 miles) of pipelines, and also sold oil distributors. Those decisions have been making the people hostage of the market ups and downs and exposing them to global oil crises.

Those who profit the most with these policies are fuel importers, who are making millions of dollars, while Petrobras is exporting crude oil and selling half of its refining park. Brazilian gas prices are currently among the highest in the world.