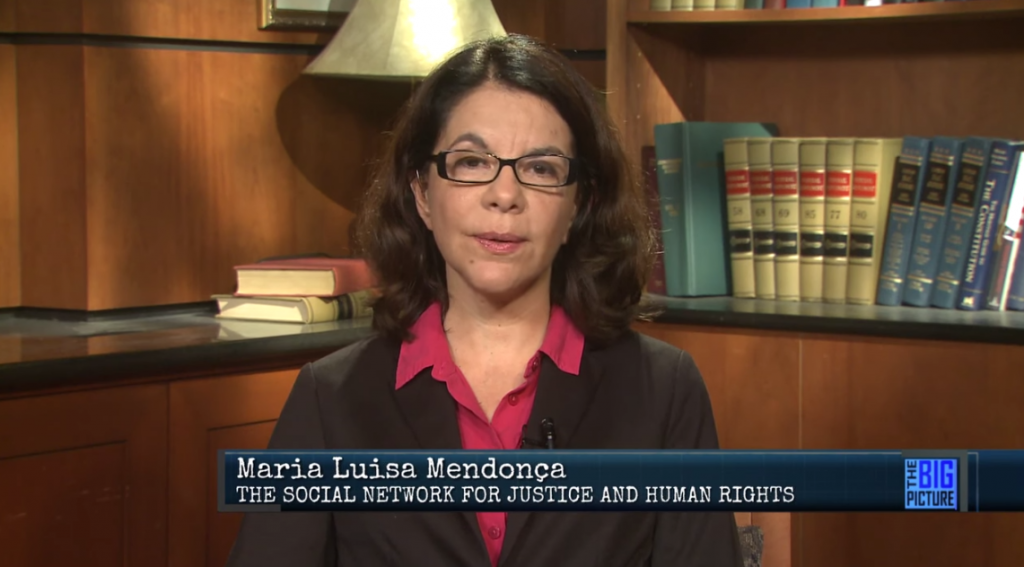 Maria Luisa Mendonça is the coordinator of the Network for Social Justice and Human Rights in Brazil and director of the Feminist Alliance for Rights at the Center for Women’s Global Leadership at Rutgers University.

She said today: “Brazil has been in the headlines again, since the May 17 release of recordings of president Michel Temer and former senator Aecio Neves negotiating bribes with the chairman of JBS, the world’s largest meat producer. The revelations bring a new round of political instability to Brazil, and the biggest wave of protests since the impeachment of president Dilma Rousseff last year.

“Both Temer and Neves played a key role in the impeachment of president Dilma Rousseff. Neves lost the presidential race against Rousseff in 2014 and his allies in the legislature introduced impeachment charges shortly after Rousseff’s term began. Temer, who had formerly been vice president, took over as president following a controversial impeachment process that removed Rousseff even after a special prosecutor cleared her of charges, leading many to call the impeachment a parliamentary coup. Today Temer only has a 5 percent approval rate as a result of pushing for Constitutional amendments to dismantle pension, retirement, labor and environmental laws. After a general strike last month, other large protests have erupted last week, calling for Temer’s resignation and for general elections.

“Democracy is under threat because Temer’s resignation opens the possibility for Congress to choose a new president, undermining the right to vote and creating further political instability. Pro-democracy demonstrations now are using the same slogan that became the symbol of large protests in the 1980’s, after a long period of military dictatorship (1964-1985): ‘Diretas já!’ (direct elections now!). The international community needs to support democracy in Brazil and denounce repression against social movements.”

Alexander Main is senior associate for International Policy at the Center for Economic and Policy Research. He said today: “Brazil’s democracy is in tatters and the human rights situation is rapidly deteriorating. Protests against the illegitimate government of Michel Temer have grown following new corruption revelations, and the government has responded with increasingly brutal repression. In Brasilia, the army was deployed to confront protesters, and security forces have reportedly fired live ammunition at crowds. In recent days, dozens of protesters have been injured, some critically. Meanwhile, in other parts of the country, attacks against social movements have greatly intensified over the past year. Security forces are reportedly implicated in the May 24 massacre of 10 rural workers in the northern Brazilian state of Pará (bringing the total number of rural workers murdered in land conflicts to 36 in the first five months of this year, according to the Pastoral Land Commission). Unfortunately, this spiral of state-sponsored violence is unlikely to abate, with the country’s increasingly unpopular rightwing forces determined to hang on to power at all costs while at the same time pressing ahead with aggressive neoliberal reforms certain to generate more economic misery for the majority of Brazilians.”