Researcher: each trespasser on indigenous land can lead to 1,600 covid-19 cases 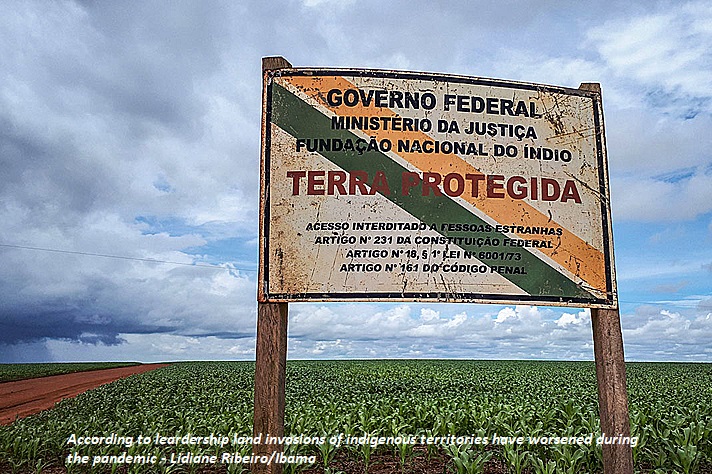 The comings and goings of land invaders on indigenous lands has exposed tribes to the novel coronavirus, creating a wave of infections and deaths according to data from the Free Land Settlement (ATL) gathering.

The event discusses the major challenges that indigenous communities and indigenism as a movement face at the moment because of the arrival of the new disease, as well as what vulnerabilities and impacts it is generating.

While indigenous populations try to maintain social isolation against covid-19, loggers, miners and religious zealots are exploiting the loosening of oversight to push forth their destructive work, says Sonia Guajajara, executive coordinator of the Indigenous People’s Association of Brazil (Apib), who organized the event.

“While we are in quarantine, fighting so that indigenous people can stay on their land, we are seeing a rise in invasions. In one month, there was a 29,3% increase in deforestation. These are numbers from the National Research Institute (Inpe),” she relates.

Sonia reinforced the notion that unless measures are implemented against these trespassers, the tendency is that a new genocide of native populations will come to pass.

“It’s a perid that demands we keep an eye on this pandemic, to avoid further contagion – the forced entry into our lands represents a new genocide of our peoples – and we need to keep the other eye on the other issues that have never been resolved, that the Brazilian State has never been committed to addressing, like invasions, violent attacks, the murders,” says Guajajara.

Researcher Antonio Oviedo, from the Eco-Social Institute, has analyzed past epidemics on lands belonging to the Yanomami tribe. He discovered that one land invader could be the cause of up 1,600 cases of a disease like covid-19.

“We can see that there is a difference, over 30 days, considering that from a single case in the logging population we can expect 1,600 cases here, our isolation measures have been working. By reducing people’s movement by 50%, we’ve only had 2 cases that stemmed from an original one,” he explained.

Professor Marta Azevedo, from the Federal University of Campinas (Unicamp), published research in which she analyses how vulnerable indigenous lands are when taking into account demographics, and infrastructure like access to water, sewage and proximity to hospitals with ICU units.

The data compiled shows that 13 indigenous reservations have what may be considered critical vulnerabilities, while 85 have intense vulnerability.

Marta also points out that beyond the health risks, covid-19 also puts the cultural heritage of native peoples at risk, seeing that elders, considered the wisest, are the most vulnerable.

“For indigenous societies, it’s something that impacts their cultural continuity. These communities already have a reduced number of elderly members, due to all the epidemics and all the wars they have been through. These elders are the wise ones, the masters. As they say in Japan, they are the living treasures of indigenous peoples,” she commented.

Researcher Andrey Cardoso, linked to the Oswaldo Cruz Foundation, alerted to the fact that the indigenous lands most at risk to covid-19 are close to large urban centers like Manaus, capital of the state of Amazonas. She related yet another worry: “As the epidemic moves further into the interior, which is what we are seeing, there will be a considerable rise in the number of indigenous people in immediate risk of getting the disease,” said Cardoso.