About 3,000 landless families from the Heirs of May 1st Struggle Encampment occupied, on the morning of Thursday, January 17, 2015, 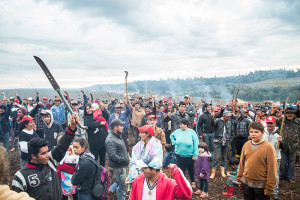 the Fazenda Rio das Cobras, of the Araupel company [a large Brazilian lumber and wood products company] between the municipalities of Rio Bonito do Iguaçu and Iguaçu Falls (PR).

According to the landless, the area was illegally taken by the company, which operates mainly in the export of timber from native forests and lumber plantations. Therefore, the families claim the expropriation of the farm of about 35 hectares for the purpose of agrarian reform.

"These are some of the best lands in Brazil, and Araupel only produces timber for export. We want to produce food from these lands, and because of illegalities, this land should be aimed at agrarian reform, so we can work and produce quality food for the Brazilian people," explains Antônio Miranda, from the MST National Directorate.

Earlier this month, the National Institute for Colonization and Agrarian Reform (INCRA) of Paraná formalized the request for annulment of the expropriation of the area in the 3rd Federal Court of Cascavel, for there are serious legal questions about the legitimacy of the property title of the company.

Since the May 1st of last year, thousands of landless families organized in the property of a farmer from the Ireno Alves dos Santos settlement, next to the occupied area. Landless youth, sons and daughters of settlers in the region, are the major protagonists in this process.

Since 2004, Incra has been invoking a judicial process against Araupel. 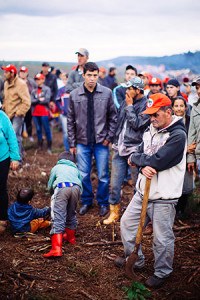 Since the opening of this process, the landless have established two settlements on disputed land: the Settlement Celso Furtado, in Iguaçu Falls, and May 10th, in Bonito River in Iguaçu.

The writ of possession to both areas was granted by the head judge of Cascavel County was given without compensation to the company, since Araupel appropriated the area illegally.

"Incra already ordered ownership of part of this area, about 23 hectares, when the settlement Celso Furtado was made. The point is that the rest of the area has the same origin in the title, which was awarded the São Paulo Iron Company/Rio Grande (in 1926). So if title to the area is proven to be null, we have a total of around 35,000 hectares that may be destined for Agrarian Reform," said Raul Bergold at the time, agrarian ombudsman Incra in Paraná.