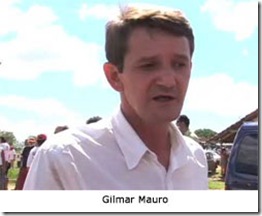 by José Coutinho Júnior
from the MST web site

The Milton Santos settlement, where 68 people live on 100 hectares in the town of Americana in the region of Campinas in the interior of Sao Paulo state, is at risk of being wiped out.

Despite the fact that it’s existed for seven years and has produced food for the towns of Americana and Cosmópolis, a court repossession of the land they live on threatens the families who live on the settlement.

According to Gilmar Mauro, a member of the MST national leadership, “We are facing this very big offensive by the court in relation to the settlement areas. The Brazilian state, agribusiness, the state and federal governments are working together to prevent the advance of agrarian reform.”

Check out the interview with Gilmar Mauro on the situation of Milton Santos settlement from the  MST web site:

What is the history of this area?

It is an area that was confiscated in 1976 by ​​the dictatorship because of debts that the Abdala group had with the State. Several properties belonging to the group were confiscated and sent to public agencies. One of them was put in the name of the INPS, now the National Institute of Social Security (INSS).

This decision became final in 1990, except that the company was not able to register the property in its name, so it remained in the name of the INSS. This is a way of hiding assets, because they were owed to other sectors and people, and if they held the assets themselves, they would lose them.

The area remains in the name of INSS and in 2006 the request was made for INCRA to settle the families on the Milton Santos encampment. And this was done. It was a legal operation, in which the INSS passed the property on to INCRA, which settled the families. This year the Abdala group filed a lawsuit that the land belonged to them.

What is the interest of this group?

This group has a lease that belongs to the Ester mill, which filed a lawsuit asking for repossession. The suit is against INCRA and the families. The judge would have given a period of 15 days to comply with the eviction which would occur this Thursday.

However neither the settlement families nor INCRA were notified to get off the land. Technically, the period of 15 days is not running but we cannot wait because they could suddenly use some legal trick to say that the period has run out.

Isn’t there is a legal device that protects families from being evicted after the creation of the settlement?

The State assumes that the settlements are legal so they are approved and are the responsibility of the State and the federal government. But it was a federal judge who is aware of this who demanded the repossession. Technically, if they are evicted, INCRA would have to compensate the families and find another area for them. But we are asking for an expropriation of the land in the public interest so that the families do not have to leave the settlement. In an expropriation in the public interest there is no right of appeal. This process is in the Civil House (with Minister Gleise Hoffmann). Our struggle is to put on pressure so that President Dilma expropriates the area in the public interest.

What is the importance of the settlement for the Movement and for the nearby cities?

It’s a small settlement in terms of the amount of land. Each family has little more than one hectare for the production of vegetables and fruits. This settlement is in the middle of the cane fields used by the Ester sugar cane mill. And it shows the quantity of food that we can produce on that land.

Every type of investment that is made there are resources that will flow into the cities of Cosmópolis and Americana. It is a settlement that has a large number of families living there and making a living with this produce. Preventing the eviction is crucial to maintaining the struggle for agrarian reform near urban centers. Produce from the settlement goes to school lunches, for the Food Acquisition Program (PAA). The community holds markets every Saturday in Cosmopolis, where families participate and bring their produce.

What’s the relation of the settlement to the mill and the neighboring farms?

It’s very difficult because there’s a lot of pressure to remove the families. The mill even tried to close the road between the settlement and Cosmópolis and there were various eviction attempts. This is why there are many interests--from the Federal Court to the mill--working to remove these families from the area of the cane field. There is a struggle in that region to increase the areas of the settlements.

What measures is INCRA taking to avoid the eviction?

INCRA says that there is not going to be an eviction. The problem is that the same thing happened in situations where there were evictions of settlements, such as in Limeira, where an area belonging to the State became a settlement. And we were brutally evicted. This guarantee was always a promise, but families want a definite decision. And the end of the year is drawing near so we want to resolve this situation. INCRA says that it is moving the proceedings forward, trying various alternatives, and will carry out the expropriation in the public interest. I spoke last week with Ministers Aloízio Mercadante (Education) and Ideli Salvati (Institutional Relations), who are aware of the situation.

What would this type of threatened eviction of families from productive settlements mean for agrarian reform?

We are living through a serious situation. It’s not just the Milton Santos settlement. In Pernambuco, in Minas Gerais, in the area of Felisburgo, in two areas of São Paulo state, there are settlements in consolidation that can suffer this type of reverse on the part of the Court. Besides being in a scenario of few expropriations, with agrarian reform off the agenda of the federal government and the political debate, we are facing this big offensive by the Court in relation to settlement areas. The Brazilian State, agribusiness, the state and federal governments are uniting to prevent the advance of agrarian reform.

What activities does the MST plan in defense of the settlement?

We are going to hold a march this Tuesday. The idea is to show the people that the Milton Santos settlement can become a new Pinheirinho (community of São José dos Campos violently evicted by the Military Police in January) and bring pressure in front of the office of President Dilma and the Regional Federal Tribunal. After the rally, we are going to the Milton Santos settlement and organize a resistance encampment. On Friday, we will hold a big protest in Americana to publicize the situation in Milton Santos and ask the local people for solidarity with our cause.