An Exchange & Co-Creation with the Brazilian Landless Workers Movement (MST): The Role of Culture in Political Struggles

Ana Manuela Chã visited the Bay Area to attend a conference on climate change. After the conference, Ana was given a tour of some of the public art in the Bay Area – murals. 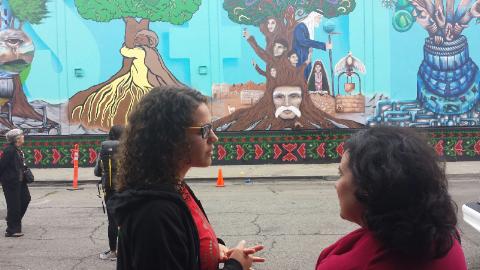 On August 11, 2104, at a gathering of activists and cultural workers at Occupy the Farm in Albany, CA, Ana addressed the issue of “culture” in social movements, explaining how the MST has been able to integrate culture, art, and performance as one of the fundamental building blocks of their movement for agrarian reform and the redistribution of land in the Brazilian countryside.

Bay Area activists and organizers who identify as cultural workers* were in strong attendance, and stayed after Chã 's talk to collaborate on a large mural commemorating the farm's history and potential as a community resource.

Chã 's visit was punctuated by visits to Bay area community art installations, and multiple gatherings with small groups organizing around a vast range of topics including poverty, homelessness, food justice, and art and culture. 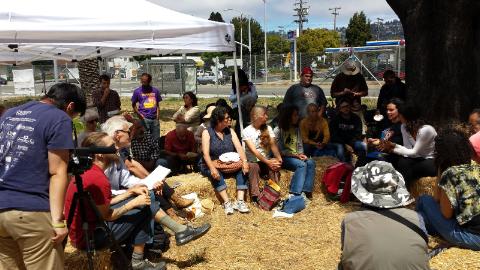 *What's a cultural worker? "Media, education, religion, and the arts all have defining roles in crafting and propagating the cultural stories by which we humans understand our natures and the possibilities open to us. If you are a member of any one of these professions, think of yourself as a modern culture worker. For better or worse, you are engaged in crafting and propagating the cultural stories that serve either to legitimate the devastation the old economy causes or shine a light on the possibilities of the new economy."

Read more about Occupy the Farm.