Information on the Sixth Congress

The Sixth Congress has as its principal function the final ratification of the policies to guide the MST in the next five year period.  These policies were discussed and debated first, in each settlement, then, by representatives at the state level and now, at the national level. Many of the policies have been agreed to, including the slogan to guide the next period: 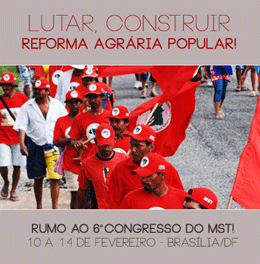 What is a “people’s agrarian reform?” Generally, it consists of three elements:

1.  To develop an agricultural model based on agro-ecology rather that agro-business, i.e. sustainable agriculture that respects the land (non-use of agro-toxins and petro-based chemicals).

2.  To advance forms of cooperation based on food sovereignty, cooperative forms of production and the process of agro-industrialization (i.e. processing agricultural products into various consumable forms – sugar and cachaça from sugar cane or yogurt products from milk) in order to capture the added value.

3. To transform agrarian reform settlements into a political force by ecological integration between the countryside and the cities by, for example, providing food to urban schools or providing healthcare in the countryside.

Go to the MST's website to view a history slide show HERE.