Dilma says "Brazil has to know that agroecology is possible" 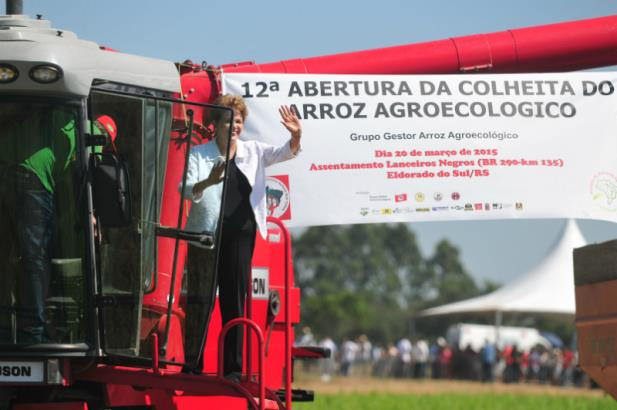 On March 20, President Dilma Rousseff attended the 12th Festival of the Agro-Ecological Rice Harvest in Integração Gaucha and Lanceiros Negros settlements, in Eldorado do Sul, in the metropolitan region of Porto Alegre (RS).

At the time, the president praised the new structure of the drying and rice storage unit with a capacity of 80 million bags belonging to COOPTAP, the Cooperative Workers in Settlements in the Region of Porto Alegre.

The new unit for drying and storage of rice had financing of R$ 3.4 million from the National Bank for Economic and Social Development (BNDES), through the Strong Land program of the National Institute of Colonization and Agrarian Reform (INCRA).

Currently, most production of organic rice in the country comes from the gaucho settlements, which have an area of 4000 hectares cultivated, involves more than 450 families in 14 settlements. The goal of the 2015 harvest is to achieve production of 443 thousand bags.

"I am here greeting the three pillars of agrarian reform. First, the existence of workers, farmers, families who have organized themselves into cooperatives; second, that they focused not just on production but are betting on something very important which is the agro-ecological production, close to a large city such as Porto Alegre. And so, they created not just production, but the processing, storage, packaging and as the president of the cooperative was telling me, this is where this industry will be built,” said the president.