In a follow up to the massive nationwide protests on International Women's Day, the women from the MST occupied the farm of a known sexual abuser and blocked the train tracks of the Vale company, responsible for the deaths of over 300 people from the bursting of a dam in Minas Gerais.  We bring you both these stories. 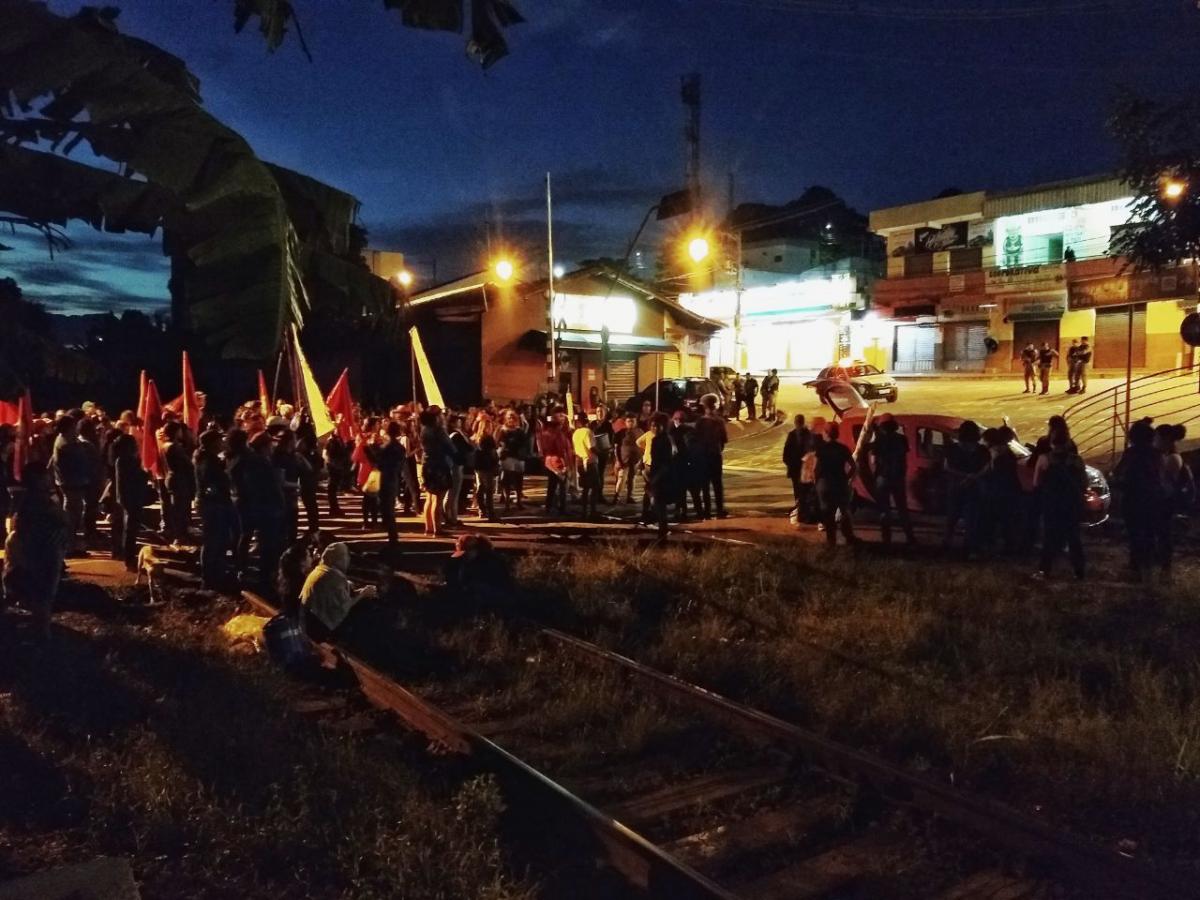 Fighting for justice for Marielle and the dead from mining, women from MST block Vale's train in Minas Gerais

After one year to the day when Marielle Franco was murdered, women from MST and MAM [ pay homage to her memory and and denounce the crimes of the Vale.

On Thursday morning, around 400 women, in addition to condemning the murder of councilwoman Franco, denounced the mass murder of workers, with the rupture of the Córrego do Feijão dam in Brumadinho-MG; predatory mining violence against women; the threat to the water supply to the population generated by the miners and their total environmental irresponsibility, besides the avoidance of social security payments and the non-payment of taxes on mineral extraction. The women stopped the train that transports the iron ore extracted from the region of the mining iron quadrilateral, near the center of Sarzedo, a city near Brumadinho. 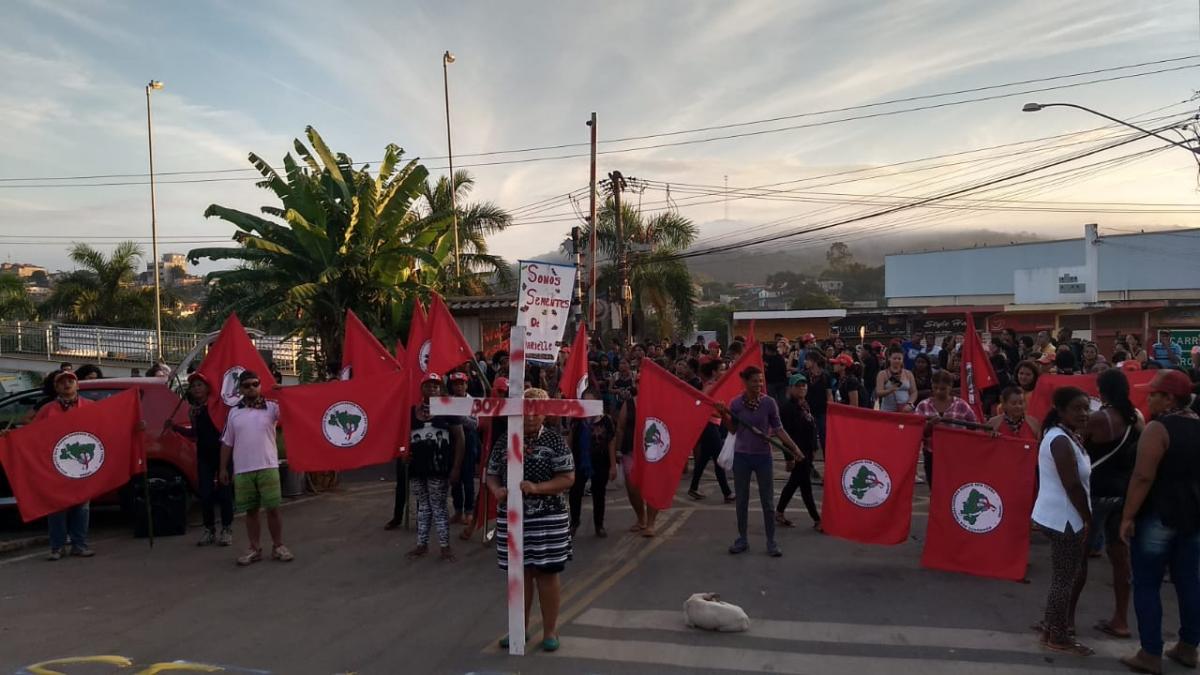 "This year's journey denounces the whole web of relationships that threaten the lives of women. That's why our theme is 'For the Life of Women, we are all Marielle'. From the execution of Marielle by a parallel militia state, that now is related to the family that assumed the presidency, until the more criminal activities of the mining, all this is part of the same capitalist system. Whoever is in charge of the system does not care about life or people, they want more and more profits at any cost. The first people to suffer the consequences of this are us, women." explains a National Coordinator of the MST, Ester Hoffman.

Sarzedo is one of several mining municipalities threatened by dams. The sludge from another mine, Itaminas Comércio de Minérios SA, could end up with almost half of the city. Recently, in a public hearing with the company, residents reported problems related to the stability of three dams. The company claims that only the B4 dam would have problems. The activities of Itaminas are suspended for an injunction, since February 7, until it carries out a series of adjustments. According to the report of the Environmental Military Police "... most of the instruments used for such monitoring, i.e. the piezometers, were damaged." Also there are no sirens in the areas that could warn of an eventual breakup of the dam. 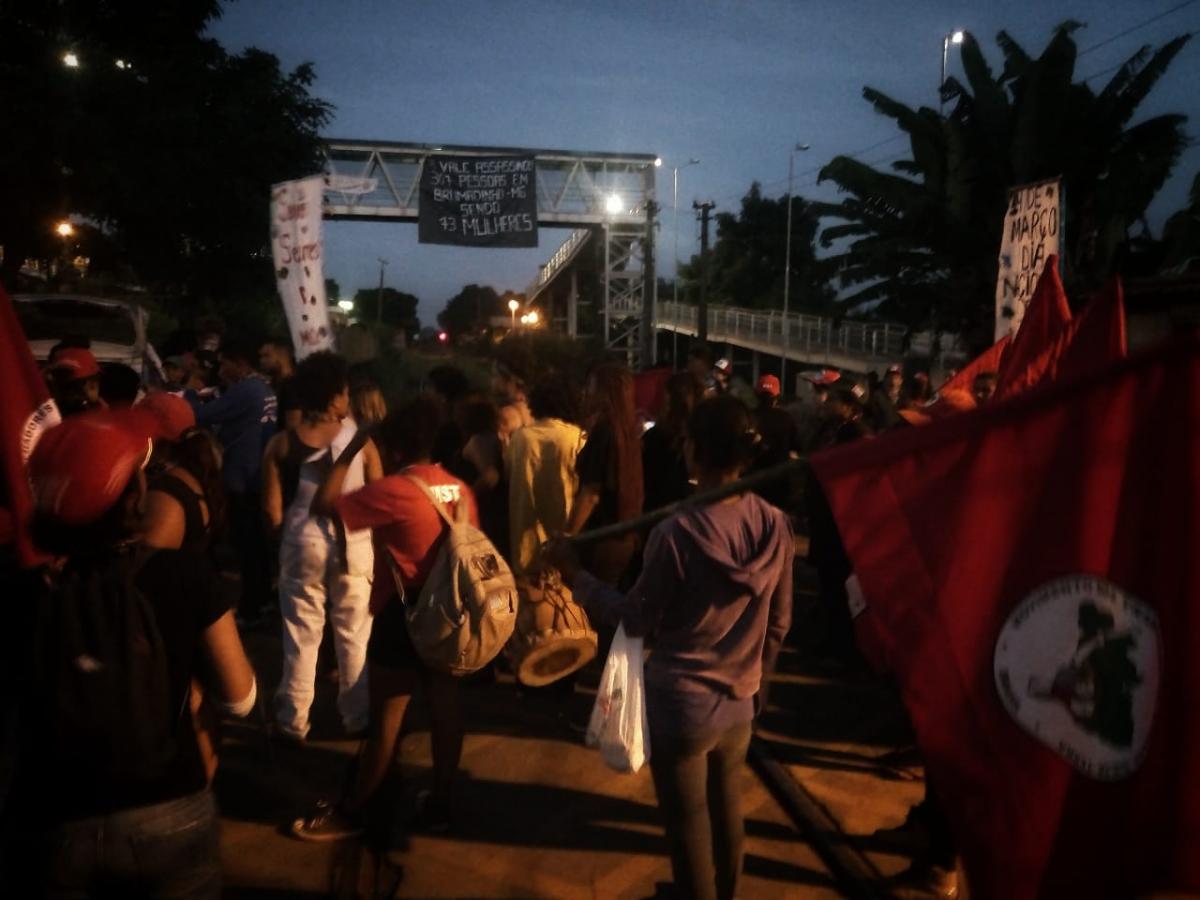 In this same city, the Jangada mine is located, responsible for 7% of all Vale's extraction. From it came part of the tailings that buried the Córrego do Feijão and killed the Paraopeba river. There are 308 people killed by Vale, 67 are women and 136 children are now orphaned.

In Minas Gerais, 1.7 million people live in cities where at least one tailings dam is classified as high risk or high potential damage. In contrast to the Financial Compensation for the Exploration of Mineral Resources (CFEM) should guarantee the welfare and municipal public policies and levy in strict fines. The municipality of Brumadinho collected taxes in 2017 of almost R$35 (approximately US$9 million). However, this tax does not correspond to the development of the region, which becomes mining dependent only with the consequences of a mining model that is closely linked to predatory capitalist logic, which plundered natural goods and transformed them into commodities. 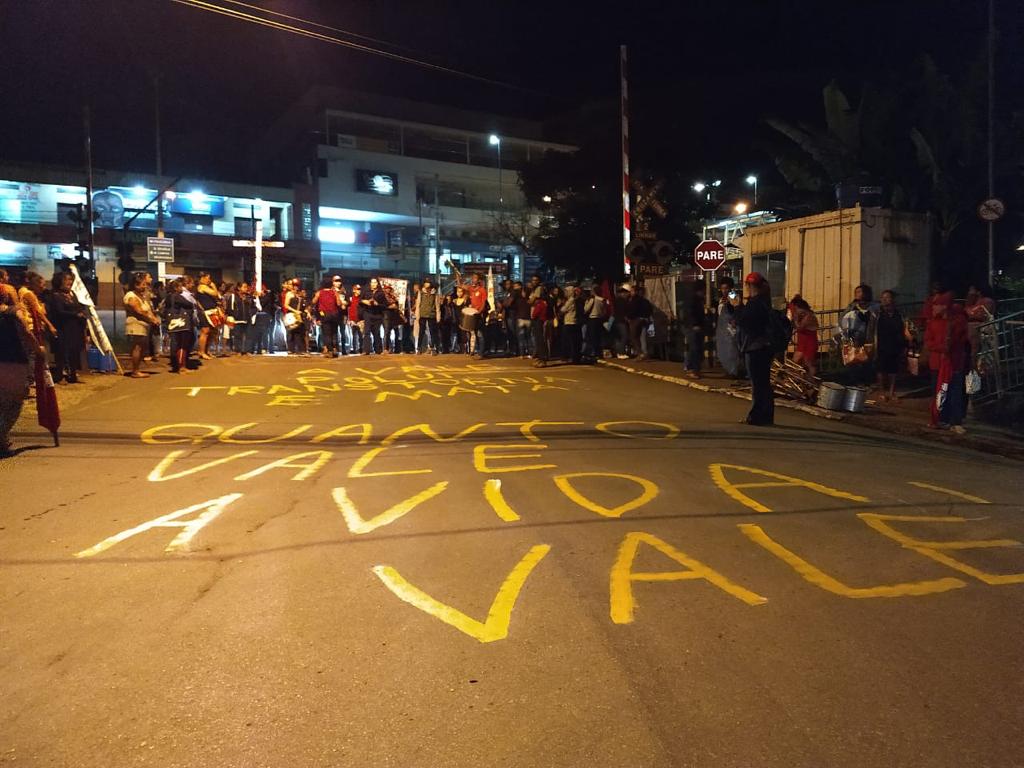 "Vale company killed my brother. It was a crime that shocked our family and our community. It killed the river Paraopeba that was our source of sustenance, where my brother and our family fished. Our river now cries ore, cries water and cries blood! There's a lot of human blood in the river, it's a lot of sadness," said Izabel André, a resident of Tejuco, a community damaged by the dam break.

What remains for women living in territories where mining companies are installed is violence, prostitution, exploitation of labor, expulsion of territories, contamination of rivers, problems of their own physical and psychological health and of their children, extensive working hours, theft of water and precariousness of life. 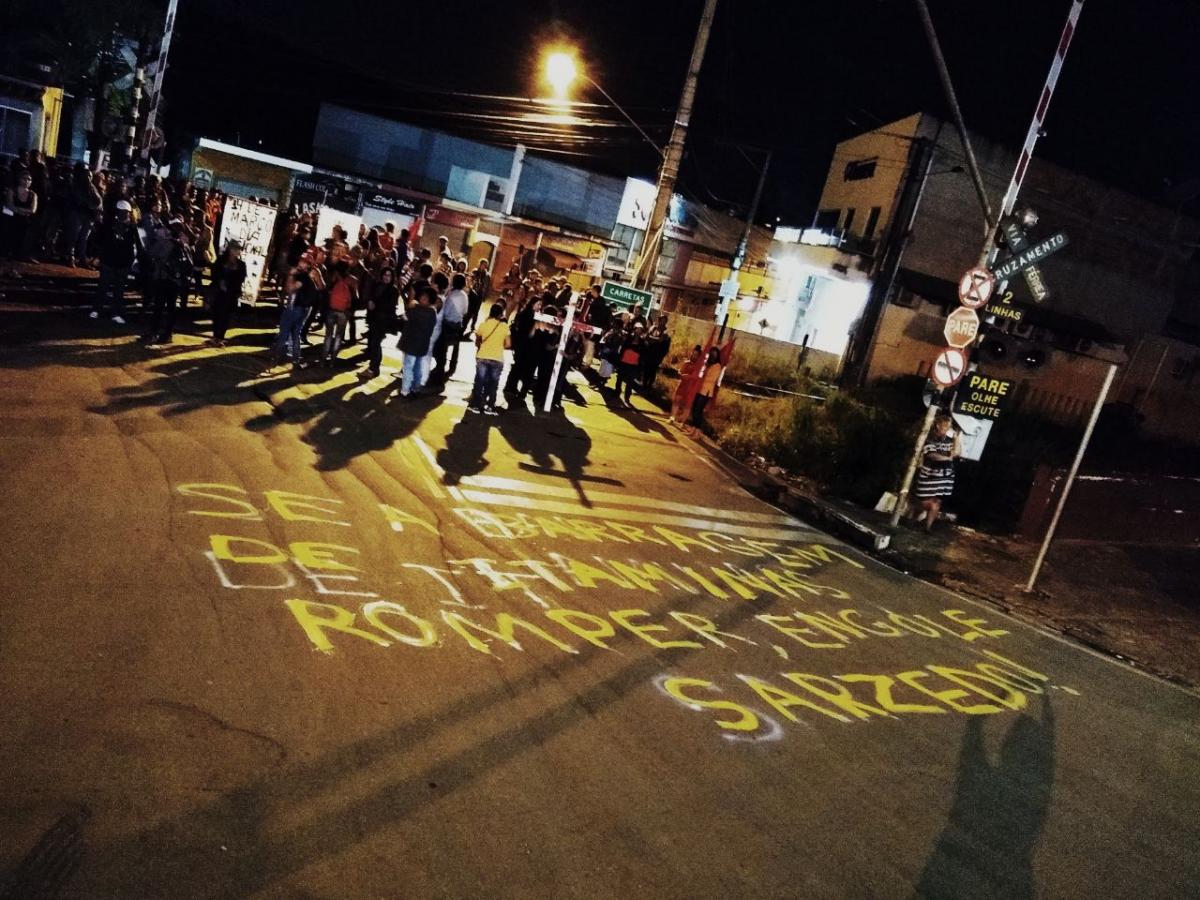 They are the first to be impacted, because they are at the tip of systematic discrimination, increased inequality and loss of autonomy as an effect of mining activity. This is why women are also the first to organize to face the mineral model and the radical changes imposed in the territories on their modes of production and reproduction of life.

"We want people to understand that the problem is not the dams, but the mining model, which delivers everything overseas, especially to China, to be benefited. Precarious work, pollution, mud, lack of water are left to Brazil. Of the total exported wealth, only 10% is in Brazil. Companies have no responsibility to the country and governments not only turns a blind eye, but also support the unbridled expansion to receive some exchanges," denounced Maria Julia, of the leadership of the Movement for Sovereignty in Mining.

[Editor's note: the police attacked the protest at Vale, firing rubber bullets in an attempt to break up the protest. We have include photos of the wounds suffered by the MST women. PLEASE BE ADVISED: THE PHOTOS ARE HORRIFIC AND GRAPHIC.]

On Wednesday, March 13, over 800 landless women occupied one of the farms of João Teixeira Farias, known as ‘João de Deus,’ who became famous in Brazil and across the world in the 1970s for his services as a so-called medium and “psychic surgeon”. His farm “Dom Inácio,” which is the subject of legal proceedings, is located in Anápolis in the rural region of the Brazilian state of Goiás. The land occupation was carried out as part of the national days of struggle of the Landless Women.

In December 2018, Teixeira was publicly accused of sexual abuse and violence and since then, more than 500 women have come forward to the police and the Public Prosecutors Office of Goiás to report abuse by him. Most of these incidents took place at his “treatment facility”, Casa Dom Inacio de Loyola, in Abadiânia-Goiás. It was later found that since 1980, a number of complaints had been filed against him. One of the first reports of such an incident was by his own daughter, Dalva Teixeira, 45 years, who declared in a video that she had suffered sexual abuse at the hands of her father between the ages of 9 and 14.

In addition to his flagrant sexual abuses, Teixeira is also known for accumulating unproductive land and terrain in the State of Goiás. According to research by the newspaper Folha de S. Paulo, he has 27 properties registered under his alias, 23 of which are in the urban area totaling 19,725 square meters, 4 in the rural area totaling 703 hectares, which add up to 985 football fields. 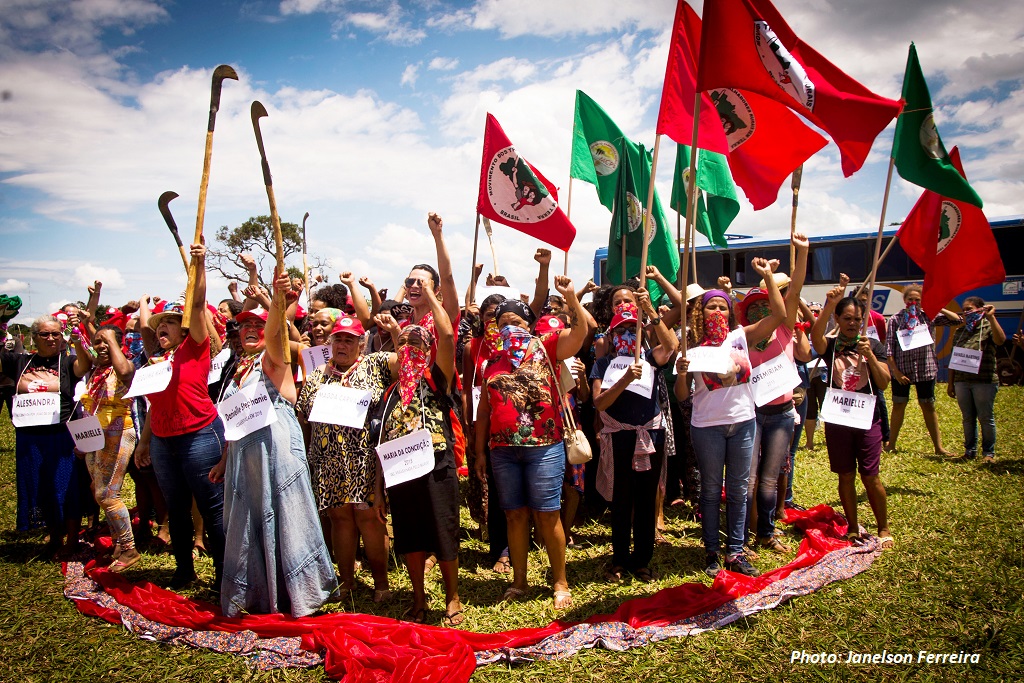 In a statement about the land occupation, the women of the Landless Rural Workers’ Movement (MST) and the People’s Peasant Movement (MCP) stated, “Today, the landless women occupy the Agro-pastoral farm Dom Inácio, which is fruit of abuse, rape and violence. We fight #ForAllofUs in a Brazil that is the country with the fifth highest number of violent deaths of women according to UN data”.

After the public accusations in December of last year, Teixeira was put in preventative detention on charges of rape, rape of vulnerable persons and sexual violation through fraud, coercion and corruption of witness. Yesterday, Tuesday March 12, the Criminal Justice Court of Goiás accepted a habeas corpus for him and his son Sandro Teixeira, though João will remain in prison as he has other charges against him.

The women occupying his lands also pointed out that almost a year after the assassination of Rio de Janeiro councilwoman Marielle Franco, the people who ordered and planned this deed still walked free.

They stated, “Our commitment is to continue as part of the permanent struggle in the current moment we live in. Against the perverse formula of appropriation and concentration of wealth in the hands of a few and the increase in misery and inequality. Against the current government that takes away the rights of women, that oppresses us, violates us and kills us. Against machismo and the patriarchy. Against everything that silences us, humiliates us, and kills us, we continue for all of us. For the life of women, we are all Marielle.”