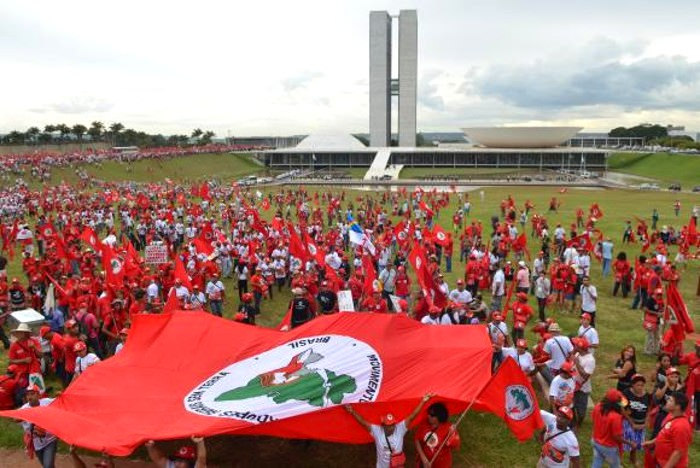 The Landless Rural Workers Movement - MST, publicly denounces the attempt at an institutional coup d'Etat against the President of the Republic, Dilma Rousseff, promoted by the President of the Federal Chamber, Eduardo Cunha (PMDB/RJ), and reaffirms its commitment to the defense of democracy and respect for the vote.

We reject the behavior of Deputy Eduardo Cunha and we reaffirm that he is the reflection of the explicit alliance between the corporate media, led by the Globo network, together with the right-wing political parties. Therefore, he lacks the moral, ethical or political legitimacy to propose the impeachment of the President of the Republic.

All the attacks on the rights of the working class launched under the Presidency of Eduardo Cunha in the Chamber of Deputies, are being repelled with a great FORA CUNHA! (CUNHA OUT!) campaign. Therefore, we will still wave that flag until Cunha falls and his criminal culpability is proven in the established processes, resulting in his immediate imprisonment

We stress the need for the Dilma Administration to assume the program it was elected on in 2014 and exercise a mandate that defends the working class. Nevertheless, we do not accept any type of coup and we will defend the President's mandate legitimatized by the votes. At the same time, we will continue struggling against the current economic policy of neoliberal characteristics, implemented under President Dima's second term, which penalizes the Brazilian population, promotes a regress in labor rights, benefits rentist capital and signals the surrender of our natural resources to the plundering of international capital

We believe that the political, economic, social and environmental crisis that we are undergoing today demands deep structural reforms that secure the consolidation and deepening of democracy, promote the distribution of income and wealth produced here and guarantee the sovereignty of our country.

That is why we call upon all the activists and all the working class to struggle for the abrogation of the mandate and imprisonment of Eduardo Cunha under the understanding that only with structural reforms we can place Brazil on a new platform for democracy and social justice.