Send a Message of Solidarity with Lula da Silva 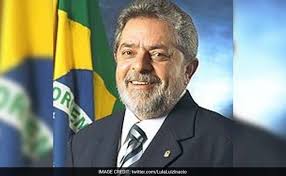 Luiz Inácio Lula da Silva's appeal from his conviction for corruption will be before the Regional Federal Court in Port Alegre on January 24. As is clear from articles analyzing Lula's conviction, there is ample reason to claim that that the conviction is purely political in nature and not based on the facts or the law. See "Lula’s Witch Trial: Who Are The TRF4 Who Will Judge the Former President of Brazil?" on this website.

Many are sending their messages of solidarity with Lula, 's to defend the candidate of the people of Brazil and the democratic system itself.

Below, we offer a sample e-mail to send to the officials of the Federal Court of Justice of Porto Alegre to exhort them to abide by the law.

Dear Officials of the Regional Federal Court of Justice of Porto Alegre,

I am writing to express my concern over the political trial that is being carried out against President Lula da Silva, which would prevent him from running in the 2018 elections, despite having presented no proof whatsoever of wrongdoing by the accused.

Unless undeniable proof is presented to prove that Lula Da Silva committed the crime of corruption, the unnecessary prolongation of this trial must be regarded as no less than a political persecution to prevent Lula da Silva from running in the 2018 elections.

This constitutes a serious attack on democracy as it denies the people of Brazil the right to freely elect the candidate of their choosing. A candidate that, according to the polls, will most likely win the elections in every foreseeable scenario.

As a President, Lula implemented policies to fulfill the rights of the people and fought against economic inequality, racism and patriarchy. Brazil needs to continue on that path of sovereignty, anti-neoliberalism and dignity for the people, and right now, another presidential term held by Lula is the best answer.

I hope you put justice first and let the Brazilian people decide on their future.