Workers, students, and professors are mobilizing with other sectors against dismantling of public education 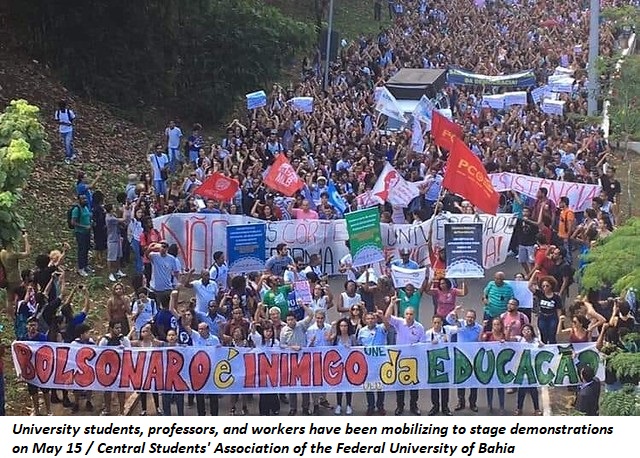 School and university students, workers, teachers, and professors in Brazil will hold a national strike on Wednesday, May 15, in defense of education in the country.

The protests are being organized to fight the attacks by the far-right president Jair Bolsonaro and his Education minister, the economist Abraham Weintraub, against universities and critical thinking.

In early May, the government announced a 30-percent budget cut for Brazilian universities and froze graduate grants awarded by the Coordination for the Improvement of Higher Education Personnel (Capes).

Jessy Dayane, the vice president of the National Union of Students (UNE), spoke with Brasil de Fato about the expectations for the National Day in Defense of Education.

“This budget cut puts the public university at risk, and consequently may hinder the possibility of many young people who are at school to access higher education. This budget cut crushes the dream of a generation to go to a public, free, quality university,” Dayane says.

She also pointed out that not only students, but society at large will be impacted by the measure, as public universities produce research that aims at social, scientific, and technological development.

The measure would initially affect three federal universities, in Bahia (UFBA), Rio de Janeiro (UFF), and Brasília (UNB), which the government claimed were causing a “mess” in the country.

The decision was criticized by professors, students, and workers of universities across the country, and education experts argue that the move disrespects the Constitution, which establishes universities have educational, scientific, and administrative autonomy.

After the backlash, the president expanded the decision to all federal universities.

Some higher education institutions started to mobilize, including the Federal University of Bahia (UFBA), where around 3,000 students, professors, and staff staged a rally on May 6. Two days later, around 5,000 people from the Fluminense Federal University (UFF), in Rio de Janeiro, took to the streets against the budget cut.

Now, the general strike on May 15 will expand the mobilization to the entire country.

Heleno Manoel Gomes de Araújo Filho, the president of Brazil’s Confederation of Workers in Education (CNTE), says the mobilization could overturn the dismantling of federal universities promoted by the Bolsonaro administration.

Araújo Filho told Brasil de Fato about how the workers are organizing for the general strike.

“The mobilization is intense. All organizations that are members of the CNTE are taking part, all over Brazil. It’s 50 organizations, unions, associations, and federations connected to the CNTE. All public schools will stop and we are going to have demonstrations in all Brazilian capitals. In the morning, in the afternoon, all capital cities will have demonstrations. We have joint protests scheduled in 21 capitals with basic and higher education staff, workers from federal institutions and the private sector,” he said, adding that other sectors are supporting the mobilization, including oil workers and activists with the People’s Brazil Front, the People Without Fear Front, and union centers.

Several people’s movements and unions believe that the strike on May 15 will also be a moment to call society at large for a national strike on Jun. 14 against the pension reform proposed by the Bolsonaro administration.