An MST member was killed and a journalist was injured after a truck was driven over protesters in Valinhos, São Paulo 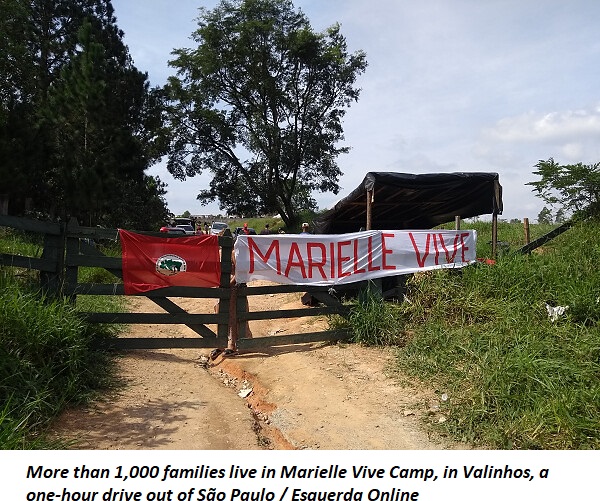 A driver rammed a truck at high speed on Thursday into a demonstration held by landless families who live in the Marielle Vive Camp in Valinhos, a one-hour drive out of São Paulo, Brazil, killing an elderly man and injuring a journalist.

Members of the Landless Workers’ Movement (MST) reported that they were holding a demonstration this morning, when the driver seemed to deliberately want to hit the group. The number of injured is still unclear.

Luiz Ferreira da Costa, a 73-year-old member of the MST, was killed, and 59-year-old journalist Filipe Tavares was injured and taken to a local hospital.

Witnesses say the demonstrators were threatened with a gun when they tried to follow the truck as the driver ran from the scene.

Costa and 500 other landless activists were protesting outside the Marielle Vive Camp, set up in the rural property Fazenda Eldorado Empreendimentos Ltda on Apr. 14, 2018, one month after the execution of Rio de Janeiro councilwoman Marielle Franco, and where 1,000 families currently live.

The demonstration gathered 500 landless activists outside the camp. Kelli Mafort, from the national board of the MST, said they were not blocking the road or marching. “It was a busy road, but they were standing there to expose the camp’s water supply issue, by handing out flyers and food produced in land reform settlements to the cars that drove by.”

Mafort said the movement is pressuring Valinhos authorities to investigate the case. “We have a description of the truck, but it will be easy to identify the registration plate and Luiz’ killer. That road is full of security cameras.”

The MST leader argues that there are city guards at the scene, but they keep asking activists to clear the road, “but don’t want to talk about punishment.” “Once again the police want to blame the victims and not go after who caused all this problem,” she points out.

The MST released a statement underscoring that authorities must make sure the killer is punished. The movement pointed out the attack happened “in the atmosphere of terror against people’s movements that is encouraged by the irresponsible authorities who are now ruling the Brazilian government.”

The press office of the government of Valinhos told Brasil de Fato that they were expected to meet with the activists before a judge last Wednesday, but the meeting was rescheduled for today. The city also said they started to send water trucks to the encampment this week, while the residents demand to be connected to the city’s water distribution system.

About the attack that took place this morning, the city government said it is a case “for the police” to solve and that “the individual responsible for this must be investigated and punished.”