Kelli Mafort: "Our steps are the size of our dreams"

During the campaign of struggle, women from the countryside and the city unite against the violence and setbacks of the Bolsonaro government.

The strength of women is kicking off the year of major mobilizations in the country. Under the 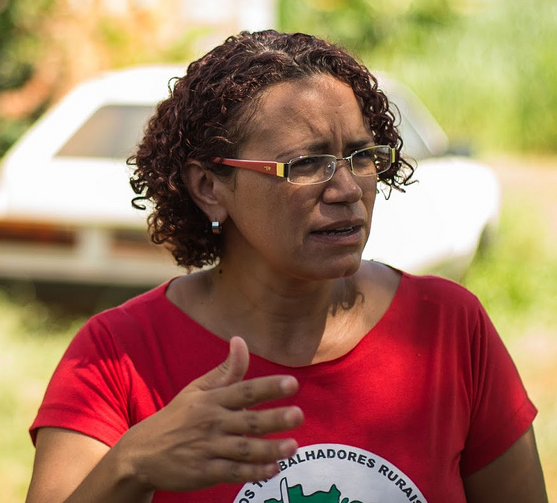 motto: "For the sake of women’s lives, we are all Marielle!" Thousands of rural and urban women will unite in the fight against violence, against Bolsonaro and the setbacks imposed by his government.

The already traditional National Week of Women's Struggles begins March 8 and goes until March 14, the date that marks one year since the murder of Marielle Franco and the driver Anderson Gomes.

Pension Reform and violence against women will also be central themes in the mobilizations. To face this setback, women must understand how this impacts   their lives. The drive of the government to supply the need for big capital, trivializes women's work and contributes to the fact that violence, control of women's bodies and machismo gain more and more space in our society.

In order to talk about mobilizations and the role of women in the process of resistance and confrontation that we are already experiencing, we interviewed Kelli Mafort, from the national leadership of the MST.

Taking into account the structure of the actions and the character of the mobilizations this year, how can we assess the participation of women in the MST?

The working women in encampments and settlements are very excited for March 8. Throughout history we have made that day a high point of struggle and resistance, and this year will be no different. We will participate massively in the actions in the cities and we are putting together rallies and actions for the interior of the country. We are raising high the banner: "For the sake of women’s lives, we are all Marielle!" Let's take to the streets the four points of confrontation that are:

Justice for Marielle and punishment for her murderers, no matter who they are. This is to prevent the murders of those who struggle for the people and also to end the violence that affects so many women, especially Black women.

Just in the first 20 days of this year, 107 cases of femicide were committed in Brazil. We are also the country that kills the greatest number of LGBTQ people in the world. Between 2005 and 2015, there was a 54% increase in homicides of Black women. Marielle is a symbol of resistance, so she lives in us, we are all Marielle.

Does this prove that we are facing a misogynist government that directly or indirectly contributed in a significant way to make the lives of Brazilian women worse?

The amendment to the Constitution (PEC) 06/2019 proposed by the Bolsonaro government to the legislature is an affront to social rights. The bill, which puts an end to the tripod of social security benefits (pensions, health and social assistance) provided for in the Federal Constitution of 1988, affects mainly women and rural workers.

In this terrible proposal, the intention is for the entire pension system to become a private and individual capitalization managed by banks, which will be the only beneficiaries of such changes.

Determining the age of 60 years for the retirement of men and women and 20 years of individual contribution, establishing the minimum value of 600.00 per year for each family group, will take rural workers to levels of absolute misery.

The debate is still underway in Congress and the Senate, but the mobilization of women is fundamental to defeating a proposal that has inspired the reform of Chile's social security system, which is implemented in the midst of the dictatorship, with a current balance of 79% receiving under 1 minimum salary and 44 % of the population below the poverty line.

The different centers of action within the government - economic / agribusiness, military, legal and fundamentalist - have political unity among themselves and impose on women workers an aggressive withdrawal of rights in continuity with the freezing of social investments, labor reform, as well as the dismantling of social policies. The conservative agenda is within the same model. Conservative measures are not smoke screen, they persecute, kill and wound.

Recently the Minister of Agriculture, Tereza Cristina, declared that the age of 60 years for the retirement of men and women in the countryside is 'great', what is the impact of that statement?

Tereza Cristina, the 'Minister of Poison' spoke this absurdity in the comfort of an air-conditioned office. She understands little or nothing about the reality of the countryside and hard work. According to the Brazilian Institute of Geography and Statistics (IBGE) the average life expectancy of Brazilians and Brazilians is 72.7 years. However, if we take the reality of the state of Alagoas, where 26% of the population lives in the countryside, life expectancy drops to 66 years.

In this example it is important to emphasize that the factors of the environment in which the workers live, are decisive aspects. Alagoas has the lowest Human Development Index (HDI) in Brazil, 36.5% of functional illiteracy and less than 20% only have access to basic sanitation. Therefore, it is more than proven that those who are poor, live shorter lives, and rural workers in historically precarious work, are in even more dramatic conditions.

After the 8th of March, can we expect a year of lots of mobilizations from the MST women?

No government will silence the voice of Brazilian women. This is the message of March 8. We will continue in active resistance, defending everything we have achieved. We will not allow the closure of the rural schools and the attack on our landless children, as we have seen recently in the case of the Record network.

As long as there are women willing to face the violence and the consequences of a misogynist society, our banners will be there. As long as there are people without land, without housing, without food, we will surely be in the middle, organizing, fighting and winning victories.

Our steps are the size of our dreams and will not take away from us joy, beauty and daring. That is why our struggle has never ceased. For Marielle. For all of us. If it hurts our existence, we are and will be resisting.