The Brazilian people and the popular rural organizations and the city

The current agricultural model imposed on Brazil by the forces of capital and big business is detrimental to the interests of the people. It transforms everything into commodities: food, goods of nature (such as water, land, biodiversity and seeds.) and it is organized for the sole purpose of increasing the profits of big business, transnational corporations and banks.

We must urgently build a new agricultural model based on constant search for a more just and egalitarian society, which produces their needs in balance with the environment. 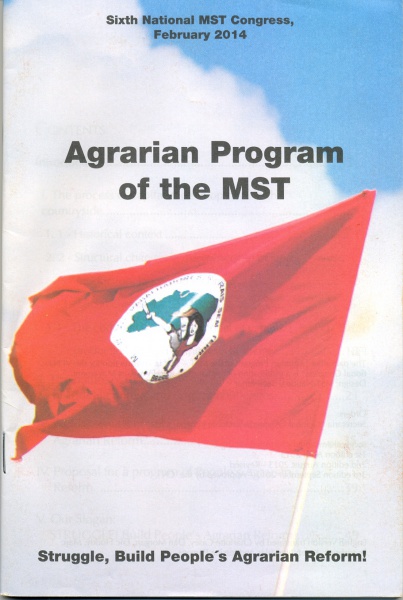 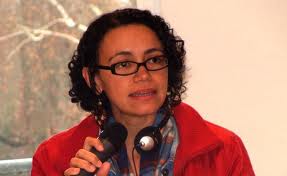 In this interview, Kelli evaluates the Congress and its actions; the importance of the contact between the base and the movement's leadership and how the experience accumulated during the event will contribute to the future of the MST.

How do you evaluate the 6th MST Congress?

To take stock of the congress is to pass before the collective gaze of the women, men, children, young and old involved in the 30 years of the MST's existence.

Among these subjects of the struggle, the youth really stood out.  They want to participate more intensely in the MST, discuss the fight for land, settlements and People's Agrarian Reform.  The women also stood out—they made up 50% of the delegations.

In organic terms, this Congress had more people discussing and understanding the debate, a debate that brought together the leadership with the base of supporters.

The organizational culture created in the MST is a legacy of our 30 years. This became evident in the organization of collective kitchens, in the work teams, in the Agrarian Reform Fair and throughout the congress.

This is important when thinking of a leadership method that allows for the participation of many people, with a division of tasks combined with group study and discussion.

How do you see the contact that the base has between themselves and the leadership during the Congress?

The Congress caused a resumption of the movement's principles, combining collectives and leadership methods. The MST will not be a top-down movement, and even less a movement led by the base; this is what the Congress shows us.

Despite the limits that political education has found lately in the people's organizations of the Left and in the MST itself, we saw in the Congress how existing processes have been central to the elaboration of collective theoretical elaboration. This was evident in the quality of the discussions, in the panels of speakers and in the plenary itself. Our activists were qualified to participate by their participation in courses and training processes.

In building our Agrarian Program, there was a process of maturing and internalizing through an intense debate arising from our political differences and from contradictions in reality.

We have formulated a theory that arises from practice, and the truth of this theory is its own practice.  This is a complex issue as People's Agrarian Reform depends on structural changes in society to become fully effective.

However, these changes dispense with a practice that, on the one hand, shows what we want to build, and on the other, they creates tension for our ideals as they are not possible within the framework of capitalism, but they are necessary for the landless people and society.

The Congress also shows us that work at the grassroots must be ongoing and needs to link up with issues that are really relevant to our movement, accommodating regional realities and the diversity of political reflections.

How do the Agrarian Reform Fair and "Ciranda Infantil" (the MST's educational childcare centers) form part of this training?

The Agrarian Reform Fair was a testament to the strength of the landless people and showed how we are progressing with production as a tool of opposition to the model of agribusiness.

The Fair helps our movement to see the political potential around food and the enormous cultural diversity involved in social relations of production.  It incorporates seed distribution as an important legacy and reaffirms the challenge of organizing production in our settlements.

The "Ciranda Infantil" showed our political experience in education and the organic process that we have been developing to highlight the central role of landless children.  As a challenge, we need to have this as a strategic issue in working with our base.

What was the impact of the actions held during the Congress?

The element of mass radicalism was the big difference.  A radical approach is that which incorporates the very origin of the MST and the people's struggles that have historically occurred in the country.

A radical approach has a political direction and as a tactic of a transformative strategic project.  We have to fight within the Left the denial of radicalism as an expression of the struggle.  Our task is to organize the struggles and the form that they can and should take.

With our actions we brought the struggle for Agrarian Reform back to the attention of the government, the judiciary and, especially, to society. The Rally and the March gave political visibility to the path that the MST has to tread.

The occupation of the MEC (Ministry of Education) was an opportunity to train our children in the struggle. They took to the floor to put themselves on the agenda in the fight for Agrarian Reform. Even with the media coverage criminalizing the movement through the old approach of the transfer of public funds to supposedly finance the conflict, it did not catch on in society and what really prevailed were the symbolism of the struggle and the political positioning of the MST.

How important was the meeting with Dilma?

The audience with the president was unexpected, and was not even our main demand at that time. In 2012 we stayed in Brasilia for three months with the Hugo Chavez National Encampment, demanding the meeting, and we received no response. In the Congress, the pressure of 15,000 people got the president's attention.

The outcome of the meeting did not differ much from the long delays we have seen with our agenda.

More than the meeting itself, the most important thing was the symbolism of the context in which it developed. And during this process, we reaffirmed the historical lesson: negotiations only come when people are in the street.

How will the MST have dialog with other sectors of the Left after the Congress?

We have the task of contributing to the integration with the project of the Left, overcoming differences. This is not restricted to the will of the organization, but it is related to being a reference point. We have no right to retreat, because we had the ability to position ourselves.

During the preparation, and in the Congress itself, we counted on the presence of many allies of the MST, advocates of Agrarian Reform. We value all these contributions and understand that this should be linked to a strategic project, even with all the existing difficulties and fragmentation.

Among the allies, we also had a significant participation of parliamentarians: 45 Parliamentarians attended our Congress, which represents 10% of the Brazilian parliament.

We spoke about the struggle and political positions, with the criticism of dictatorial government and leftism, pointing to the strengthening of a social left. The MST has the responsibility to participate and build the social and popular left.

And how will the movement face the fight for land in the forthcoming months?

Mass actions are needed, with new families, recreating the forms of struggle and redefining the slogans of struggle.

The Congress strengthens our historical challenges to remain an organizational instrument of the landless workers in uncompromising defense of Agrarian Reform, linked to a strategic project of structural change of society.

The internationalism experienced in the Congress is proof that this commitment extends beyond our borders. Through the machete on our flag, we emphasize the importance of solidarity among peoples in struggle.

The MST reaffirms its commitment to the legacy of class struggles and their lessons taken from the victories and even the defeats, which help us to take the right step along the big march.

May the power of the Congress put us in constant movement!