At demonstrations, marches, occupations, imprisonments, and commemorations of victories and conquests, music, poetry and dance are presented, expressing and strengthening the Sem Terra cultural identity.

Some work of the Culture Collective includes: 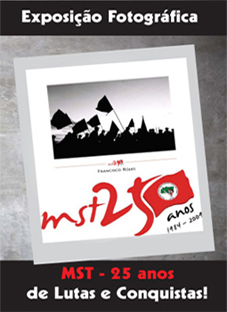 • The TERRA exhibit by photographer Sebastião Salgado has visited 800 cities across the world.

• In 2001, the MST formed the Palativa do Asare National Theater Brigadein partnerships with Augusto Boal's Thewater of the Oppressed Center (CTO).  Currently over 40 groups accross the country are parto of the Brigade.

• In 2002, the National Week of Brazilian Culture and Agrarian Reform took place at the Universidade Estadual do Rio de Janeiro (UERJ) and in 2004 the event was held at the University of Pernambco, in Redife (UFPE). The purpose of these sessions was to promote the value of popular culture and to reflect on the struggle for Agrarian Reform.

• Establishment of networking relationships with intellectuals and artisits.

• Inclusion of seinars on art and culture in the training of MST organizers.

• Publication of an art series with volumes dedicated exclusively to the fine arts and poetry, music, theater and theoretical texts.

• In 2007, the Culture Collective formed teh Via Campesina-Brazil Audiovisual Brigade.  This was the result of a successful course that trained the MST's organizers in the areas of culture and communication.  The first work of this Brigade was teh video documentary "Always Struggle," followed by other works, including the documentary "Not a Minute of Silence: Syngenta Out of Brazil."