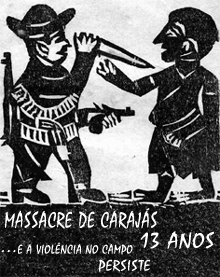 “They came from both sides and we were caught in the middle. We weren’t in the position to anything against a large group of policemen armed with rifles and machine-guns!

“When the buses from Marabá arrived with the police, they got off and shot a round of fire into the air. We thought that they only wanted to intimidate us. We started shouting words of order. We had a deaf-mute companheiro who couldn’t understand anything and he went in the direction of the police, the late Amâncio. He was the first to go down,

“I received a blow in the neck and I felt blood running down my back. At the time, I didn’t know if I had been hit or if I had been shot. When I made it back to the tent, my children were anguished. I put them in my arms and still had room to carry two other children who belonged to someone else. When I remember what happened that day, it feels as though I am reliving it,

Website links on the massacre of Eldorado dos Carajás:

11 After Massacre - Nobody Has Been Punished

Why We Are Stuggling