“Brazilians are hungry because they have no income”, says João Pedro Stedile

To Stedile, businessmen against Bolsonaro are already the majority, but they are still looking for a third way for 2022 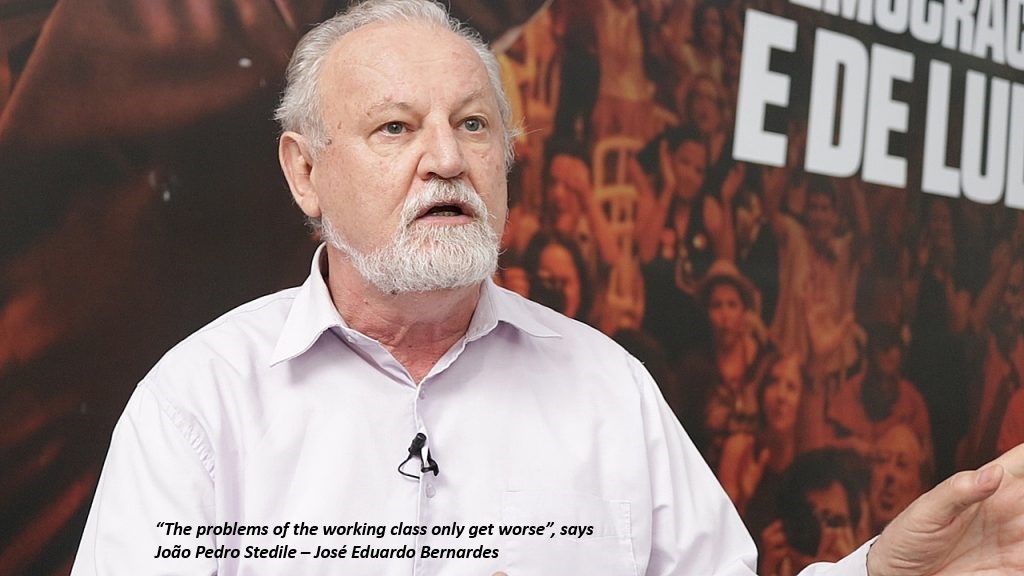 “The Bolsonaro government is just reflecting the crisis. He [Bolsonaro] is the mirror of the bourgeoisie”, says economist and agrarian reform activist João Pedro Stedile. He criticizes recent positions of part of the Brazilian business, who are only now opposing President Jair Bolsonaro (non-party) while the country lives its worst social and economic crisis.

This week’s guest at the BdF Entrevista (BdF Interviews), Stedile, one of the founders of the Landless Rural Workers Movement, also talks about the precariousness of work in Brazil, Bolsonaro’s coup attempts, and how a new government of former president Lula, the main candidate in the 2022 elections, can be organized.

Read the interview below:

Brasil de Fato: Brazil is experiencing an unprecedented crisis. Hunger has returned to affect families, the economy is not growing, and the risks of the proposed reforms have materialized. What is the real condition of our democracy since 2016?

João Pedro Stedile: The country is going through a difficult moment because it is the worst crisis in its whole history. It is a structural crisis in the way capitalism dominates the society and the economy, dominance showed in production, in an increasingly concentrated economy. Before the crisis, we had 45 billionaires; today, we have 65.

We have an ultra-concentrated economy with a fundamental contradiction since it does not produce the goods the population needs. That is the great contradiction of the dependent Brazilian capitalism, and it has consequences of a real social tragedy, which is the deepening of social inequality, our worst wound, the mark of our society.

At this moment, the main thing to know is that the crisis in Brazil is structural, which means that it goes beyond the current situation and the current government. It means that, after the “Out, Bolsonaro”, we have to think about structural changes to take the country out of the crisis and put it back on new paths, which can guarantee the well-being of the entire population.

Part of these unemployed people was already in informal works, which has grown enormously since 2018. The pandemic came to take these people off the streets. What is the level of the precariousness of labor in Brazil?

The precariousness of labor revealed by data from the National Household Sample Survey (PNAD, in Portuguese) is only a picture of the structural crisis. It is not because of the covid-19 pandemic. We have had these signs since 2014. And it is useless for economists to say that this is the trend of modern capitalism either.

That’s not all. In the next period, Brazilian society will have to carry out a major reindustrialization program in the country and refocus productive investments in family farming to produce food. We need shoes, clothes, houses, food, and all of this needs to be produced in the industry and family farming.

So, these times of precariousness, of withdrawal of rights from the [Michel] Temer government until now, are just signs of this greed of the Brazilian bourgeoisie. In the face of the crisis, they put all the burden upon the back of the working class. It’s absurd that a continental country like Brazil has around 20 million people starving since Brazil has a huge potential for food production. They are not starving because of a lack of production. They are starving because they have no income. They cannot afford to buy food at the supermarket or the street markets.

And according to researchers, we have another 70 million people in the so-called food insecurity, which means they are eating in the worst possible way, below the needs, or eating unhealthy food, “non-nutritious” food. That is the picture of the crisis. 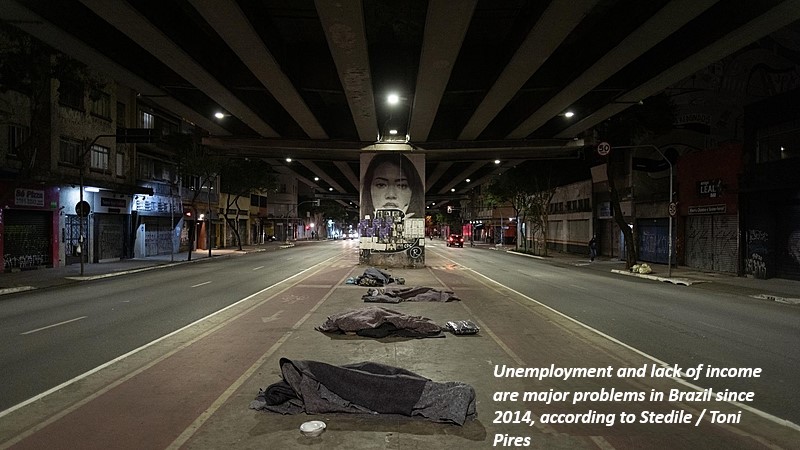 Currently, the Bolsonaro government has the support of the centrist parties. Indeed, “physiology” took the government by storm. Bolsonaro no longer seems to have the market support, and even that social base used to support him is increasingly restricted to 20%. Even so, is it still difficult to talk about impeachment?

First, we have to understand the nature of the Bolsonaro government. We, the social movements of the Frente Brasil Popular and the Landless Rural Workers Movement, have said that Bolsonaro is there only because the Brazilian bourgeoisie put him there.

Now, a large portion of them regret it, and Bolsonaro, as a mirror of the crisis, does not have his own organized social force, a union, a university, or intellectuals because he does not have a project to the country, he has no proposals for the nation.

At heart, he is a family-run freak we all know. His practice of “rachadinha” and all his life always was dedicated to enriching with public resources.

But even so, in the defeat of the proposed constitutional amendment to adopt printed vote, the Bolsonaro government had a majority to the point of approving it. Does that bury the chances of impeachment for now?

The issue of the “Out, Bolsonaro” and the impeachment are not the same. We think that the removal of Bolsonaro from the government by impeachment or any other measures depends on the bourgeoisie behavior or the working class.

The bourgeoisie has been demonstrating daily against Bolsonaro, but it is divided on what to do.

In my opinion, a fraction – stupid – of the bourgeoisie bets on the maintenance of Bolsonaro, on access to public resources, and on this stupid policy of privatizing state-owned companies. According to analysts, there must be 20% of the bourgeoisie thinking like that. Among those, there are Bradesco (bank), Banco Pactual, BTG, the most speculative financial capital sector, “Veio” da Havan [pejorative way of referring to Havan’s owner, Luciano Hang], and others.

However, this group – the majority – needs to solve an unknown issue before taking Bolsonaro out, which is to create a unit on who is the slate of the so-called third way. That done, the third way is only viable if Bolsonaro is removed.

There is a third group of the bourgeoisie – in my opinion, it is still the minority – which has expressed itself together with Delfim Neto. Delfim is an organic intellectual of the bourgeoisie, a historical reference for the bourgeoisie, and has repeated: “stop talking nonsense about the third way. We need to support Lula in the first round because Lula will win the elections”.

This sector of the bourgeoisie is likely to be better positioned in an alliance with Lula because they know that if Lula wins the elections, they will have to carry out a program of structural reforms. 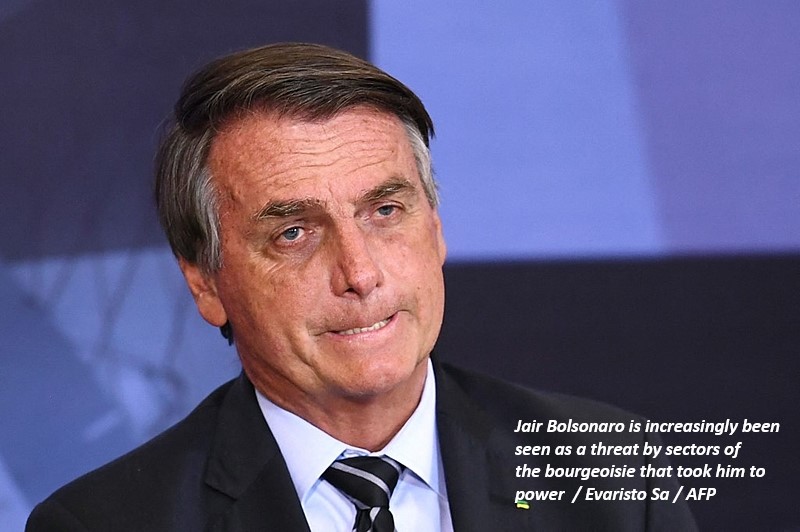 With an agreement on the “third way”, the bourgeoisie can use its economic and media power, besides its influence in the National Congress, to find a legal way to remove the government. Another hypothesis is that if there is not enough time for impeachment, they may find some way to criminalize the president because of what the Senate commission of inquiry is revealing and interdict him, therefore preventing him from running for reelection.

On the part of the working class, we must continue with the slogan that unites us, “Out, Bolsonaro”. However, the working class is unable to exercise its political force, which is shown in street demonstrations, in the de facto struggle, whether by strikes or occupations. Due to covid, unemployment, and hunger, [the working class] has not actively engaged in [recent] mobilizations.

But we can never be pessimistic. As activists and members of social movements and left-wing parties, our work is to keep on doing grassroots work, organizing the people, and trying to mobilize them for the struggle.

The support from the military police and armed militias to the Bolsonaro government is a component that has been strengthening in recent days. Is it a fact? Should we be concerned about it?

There may be provocations here and there, but I don’t believe it, and we shouldn’t fall into this paranoia that there will be a coup attempt by the military police personnel. I think the meeting of the twenty-five governors was very symbolic, because governors are the ones in charge of the military police. I think most of the police personnel are reasonable. They are responsible professionals, even though here and there they practice racism and violence in the poor neighborhoods.

The bulk of the military personnel is responsible professionals. They know their constitutional responsibilities. I don’t even believe that there is any support from them {to Bolsonaro], nor that there are coup attempts, just as I have said several times that we can’t think that they are all the same kind.

The contradictions are evident between those who went to Brasília, those who are taking public money. There are generals whose salary is R$ 100,000. Some weeks ago, Brasil de Fato revealed that [Eduardo] Pazuello’s salary is worth R$ 57,000 a month, and he went to his office twice in the last two months. In other words, it is an insult to the working class.

Another thing is the military, which is in the quarters, has its responsibilities and has shown signs of dissatisfaction with the government, especially because Bolsonaro keeps screaming that he is a captain (even though he was expelled from the Army). Bolsonaro knows that all the perversities of the current government have had repercussions over the military, and the military personnel with good sense want to get away from this fan that spreads problems.

You mentioned national sovereignty, and I wonder if the military must also be concerned about the environmental matter. We recently saw a study by Mapbiomas aim that Brazil lost about 15% of its water. Is it possible to stop these environmental abuses?

It can be explained by the greed with which the capitalists went over the Amazon, the public lands, minerals, indigenous lands, and quilombola lands. That explains this uncontrollable rage for the liberation of any pesticides. The pesticide used by agribusiness kills biodiversity and, therefore, unbalances the environment and affects the climate throughout Brazil. 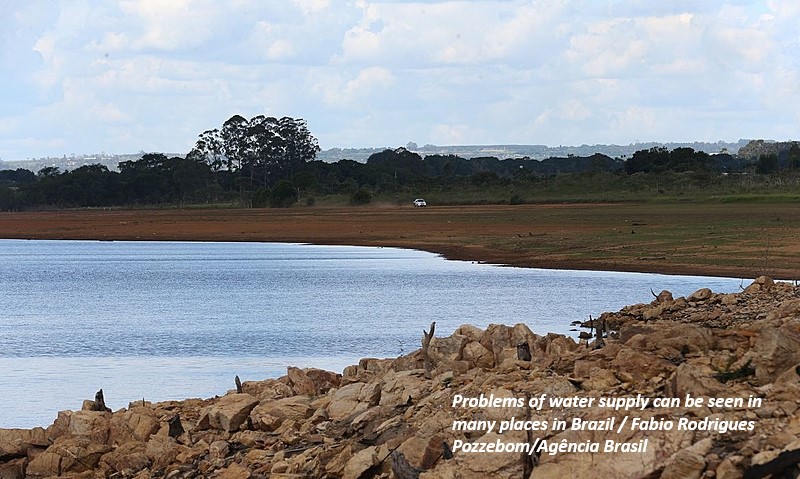 These aggressions against the environment cause contradictions for the capitalists themselves because this aggressive agribusiness model (which uses pesticides that kill biodiversity and alter the climate) ends up affecting other sectors of agribusiness.

The last orange harvest here in São Paulo state, the world’s largest producer of orange juice, dropped 40%. Why? Because rain which used to come from the Amazon Rainforest and the Pantanal wetlands did not come due to fires.

With the drought here in the Southeast region, the sugarcane sector and livestock were also affected. In short, other agribusiness sectors are beginning to realize that this predatory agribusiness model, with intensive use of pesticides, is unsustainable.

Before ending our conversation, there is the perspective that former president Lula will reach, at least, the second round. Surveys are indicating his victory in the first round. Is it possible to analyze the composition of a Lula administration amid this correlation of forces?

A progressive and popular government is not only possible but necessary. However, to see a viable Lula government, we have several aspects: one of them is the party alliances, which have their own methodology since the parties do not necessarily represent the forces of organized society, whether in the bourgeoisie, the middle class, or the working class.

The key to making Lula’s candidacy viable is not the party alliances or which people will support him. Of course, the more parties and more public figures supporting him, the better. But I think after removing Bolsonaro – our task number zero -, we, as a popular movement and as militants, should be concerned with taking advantage of 2022 to carry out a great national campaign in which the population and the working class discuss a new project to the country.

And these structural reforms will not depend on Lula’s goodwill nor party alliances. They will happen because of the people’s ability to understand their need to fight for them [the measures].