Wednesday, July 11, 2018
MST Victories
Oppression of MST and Social Movements
Info Source:
By the Communications Collective of the MST of Bahia | From the MST Page

Two other suspects fled. The MST links their flight to the fact that the state police announced the arrest warrant ahead of time. 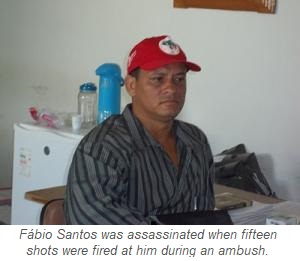 This past Wednesday morning (July 11th), state police carried out an operation that ended with the arrests of four people accused of ordering and carrying out the assassination of the MST activist Fábio Santos.

Fábio was killed when fifteen shots were fired at him during an ambush on April 2nd, 2013 in the municipality of Iguaí, in southwestern Bahia. During the assassination, his wife and daughter were by his side.

The case has been investigated by the Special Group for the Mediation and Monitoring of Land and Urban Conflicts (GEMACAU), a subdivision of the Civil Police. Investigators described a “criminal association” that included plantation owners and gunmen who were active in the region of Iguaí, Ibicuí, and Nova Canãa. The police document notes that one of the motives for the assassination was the victim’s activism in favor of land reform.

Welder Leonardo Gusmão Amaral, a farm owner, is still at large, and so is Ricardo Neves de Oliveira, whom the police have described as the person who carried out the crime.

The MST believes that two of the accused were able to flee because the Public Ministry of the State of Bahia announced the arrest warrant ahead of time. According to the movement, this announcement was inappropriate. Movement activists demand that the police take urgent action to find and arrest the two men at large.

Fábio Santos was one of the main leaders of the MST in southwestern Bahia. His assassination was followed by five years of impunity and judicial somersaults.

At the beginning of the investigation, the judge of Iguaí County, Fernando Marcos Pereira, recused himself on the grounds that he could not judge the trial impartially. The case was then transferred to the substitute judge, from Poções County, Alerson do Carmo Mendonça, who was subsequently promoted to a position outside of the county.

According to procedure, the case should then have been transferred to the first substitute county for Poções. But that county was Iguaí, where the judge had already recused himself.

The second option was Planalto County. There, Judge Daniela Oliveira Khouri also recused herself. The case was thus sent to the Tribunal of Justice of the State of Bahia, which carried out a random drawing from a triple list that included the names of judges with the highest number of votes who were deemed competent to rule in the case.

The first on the list was the judge of Encruzilhada County, Adiane Jaqueline Neves da Silva. Shortly thereafter, Silva was also promoted, leaving for Itambé County, and the case remained in Encruzilhada. The substitute for Encruzilhada was the Poções judge, who argued that the case had been assigned not to the county but to the specific judge in question. So the case was sent to Itambé.

Judge Silva, too, recused herself. The case was ultimately sent to Vitória da Conquista County, in the hands of Judge Reno Viana Soares. After five years, Judge Soares issued the arrest warrants.

Along with the judge confusion, paperwork problems delayed the process. When the case was still in Iguaí, the county prosecutor, Solange Anatlio, from Espírito Santo, took charge of the investigation. She transferred documents out of the county in order to analyze them. After more than a year with the documents, she also recused herself.

The General Prosecution Office then assigned the case to the prosecutor specializing in land conflicts, Antonio Ferreira Leal Filho. After four years and three months, he asked for indictments in the case.

Over the past five years, the MST has demanded progress in the investigation and punishment for the guilty. Movement activists and their supporters held vigils at county courts, organized marches, and occupied land throughout the state of Bahia. These actions were designed to pressure the judicial system. Today, the movement leadership in Bahia acknowledges the arrest of some of those involved in the assassination of Fábio. The struggle to defend land, according to movement leaders, plays a key role in safeguarding the dignity of women and men who work in the countryside and the city. Finally, the MST notes that activists will continue to push the responsible government agencies until all of the guilty parties are arrested.