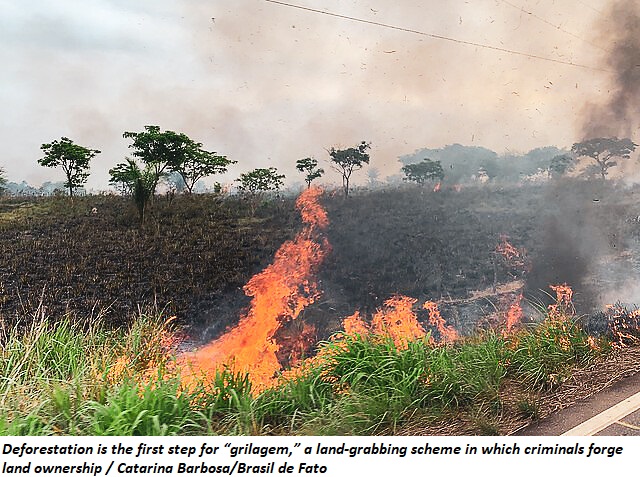 The president of Brazil, Jair Bolsonaro, signed on Tuesday, December 10 a provisional decree (MP) that aims to formalize the land titles of around 600,000 rural estates by 2022.

Experts told Brasil de Fato that the MP will reward the so-called grileiros, illegal land grabbers who encroach into and devastate large parts of the Amazon rain forest.

Now Brazil’s Congress will have 120 days to look into the decree and ratify it or not.

::Jair Bolsonaro could be a disaster for the environment, scientific research::

Brenda Brito, a researcher with the Institute of People and the Environment of the Amazon (Imazon), says that the decree is serving the interests of the country’s powerful agribusiness lobby. The expert argues that the measure may encourage armed criminals to invade public land and promote illegal deforestation.

Brito explains that this is because the decree changes the timespan of occupation of public land required to prove that settlers are entitled to receive the title for the property. “Every time they change that required timespan, they send a message that it’s possible to change the law anytime to favor those who are hijacking public land,” she says.

The provisional presidential decree establishes that settlers can formalize their land title as long as they have occupied lands owned by the federal government or managed by the Brazil's Institute for Colonization and Agrarian Reform (Incra) before May 5th, 2014. The previous rule established that settlers should prove they occupied the disputed area before July 22nd, 2008 to be entitled to formalize their land title.

“If the Congress passes this MP, it will be an accessory in allowing yet another pardon of public land theft, because those who invaded these areas after 2011 knew they were committing a crime. That [the measure] will reinforce the message that invading and deforesting these areas are actions that deserve to be rewarded instead of punished,” she underscores.

The presidential decree issued this week changes parts of a number of laws, defining criteria and the necessary documents to formalize rural estates of different sizes up to a limit that varies according to the region of the country. In the Amazon, for example, that limit is as large as 22,500 hectares (roughly 55,600 acres) of area.

The government announced the measure in a moment when the Amazon is in the limelight amid alarming records of illegal deforestation and an international debate about climate change caused by the rampant capitalism.

Data from Brazil’s National Institute for Space Research (Inpe) show that 9,762 square kilometers (nearly 3,800 square miles) of Amazon forest were deforested between August 2018 and July 2019, up 29.5 percent from the previous year’s records.

::La Via Campesina: Burning the Amazon is a crime against humanity::

Not only the devastation of the world’s largest rain forest is increasing at alarming rates, but 61 percent of the areas deforested in the Amazon in July and August 2018 were recorded in public lands, according to the Amazon Environmental Research Institute (Ipam), based on data from the Inpe.

André Cutrim, a professor at the Federal University of Pará (UFPA), in the Amazon, says that, if the provisional presidential decree signed by Bolsonaro on Tuesday actually intended to promote land reform, it should include other measures, such as redesigning the so-called “land structure” of the country, which encompasses the complex of relationships involving land tenure, production, supporting services, and rural institutions. He also adds that it should include rules for expropriating unproductive rural properties to foster agricultural production and strengthen family agriculture.

An expert in natural resource management and local development, Cutrim points out that “there is strong reason to believe that measures like this could legalize certain acts of grilagem [a land-grabbing scheme in which grileiros forge land ownership] and the illegitimate grabbing of land that has been deforested.”

::Thick smoke from human-caused fires in the Amazon spreads across South America::

The expert also adds that, without a consistent land reform policy, the decree could actually lead to an escalation of land conflicts on the Amazon border.

“If we look into the origins of this conflict – and it’s a deadly conflict, of persecution and expropriation –, it’s somehow the result of antagonizing private family property and capitalist private property, so to speak.”

One of the reasons contributing to growing deforestation is the deterioration of law enforcement agencies such as the Brazilian environmental agency Ibama.

Jair Bolsonaro has made it clear since last year’s presidential campaign that his government would no longer impose environmental fines and penalties, and has made overt attacks on the Ibama and the country’s Chico Mendes Institute for Biodiversity Conservation (ICMBio).

::Brazilian state declares emergency for wildfires in the Pantanal biome::

“We have been seeing an argument around deforestation and the government is really unwilling to truly fight this issue in our region, and it seems that it has been blaming others a lot more than itself,” Cutrim argues.