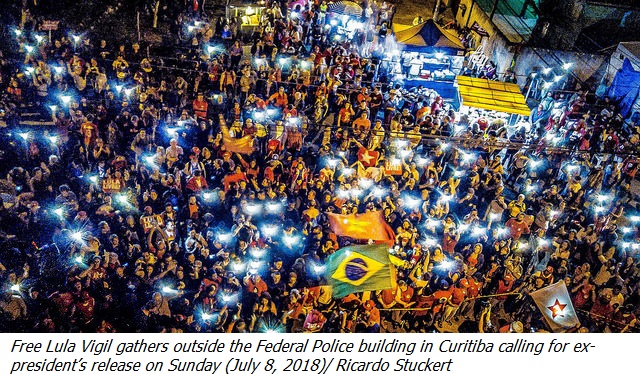 An appeals court judge’s order to release Brazil’s ex-president Luiz Inácio Lula da Silva from prison on Sunday generated expectations about the Workers’ Party leader being freed while also prompting a legal battle. The order, issued by duty judge Rogério Favreto, from the TRF4 appeals court, established that Lula should be immediately released, in response to an injunction filed by the former president's defense team.

Favreto’s order was first challenged by the trial judge, Sérgio Moro, and then by the chief appeals judge overseeing the ex-president’s case on the TRF4. Both judges issued these orders on Sunday, while on vacation. Responding to Gebran Neto’s order to overturn the early decision by Favreto, the duty judge once again ordered Lula’s release on Sunday afternoon.

After hours of legal stalemate, the chief justice of the TRF4 appeals court, Carlos Eduardo Thompson Flores, overturned Favreto’s second ruling and informed, on Sunday night, that it's Gebran Neto's order that should be followed, and Lula should remain in prison. However, lawyers interviewed by Brasil de Fato argue that only the country’s Superior Court of Justice could overturn duty judge Rogério Favreto’s order.

Lula was arrested on April 7th and is being held at the Federal Police building in Curitiba. Since then, thousands have flocked to the city to express their solidarity and support to Brazil’s former president.

Vargas told Brasil de Fato Radio’s journalist Anelize Moreira that the order issued by Moro on Sunday showed a “very activist behavior.” In his order, Moro wrote that Favreto does not have jurisdiction to overturn a previous order by a TRF4 panel and the Supreme Court.

“It’s striking that he [Moro] issued what he called an ‘order.’ When we read it, we can see that it’s not an order at all, it’s a motion for clarification about how to proceed in a case over which he has no jurisdiction anymore,” Vargas said.

“While this ruling [by Favreto] may be challenged, what’s remarkable is that it prompted this very activist behavior that was never seen before. I myself have never seen a situation like this,” she added.

Protests broke out in Brazil on Sunday in support of ex-president Lula. In Rio de Janeiro, hundreds of supporters and members of parliament staged a vigil calling for the former president’s release.

See also: Lula ‘has been kidnapped,’ jurist says on legal battle to keep ex-president in prison