Brazilian Friends of the MST Express Solidarity and Resistance 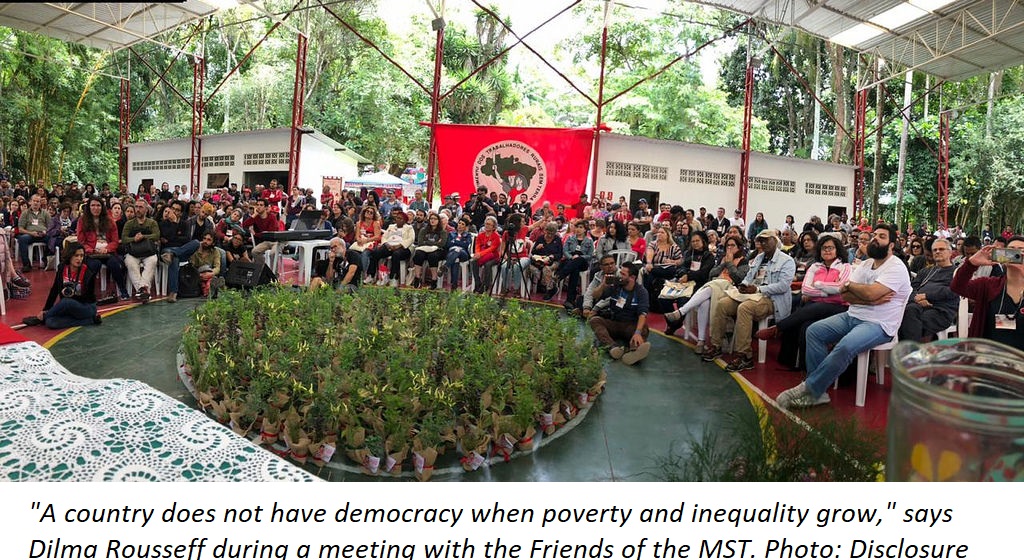 by Maura Silva
"What would this world be without activists? What would the human condition be like if there were no activists? Not because the activists are perfect, because they are always right or because they are supermen and do not make mistakes. That’s not it. It’s that the activists do not come to get yours, come to surrender the soul for a handful of dreams. After all, the progress of the human condition depends basically on the existence of people who are happy to spend their lives at the service of human progress. To be an activist is not to carry a cross of sacrifice. It is living the inner glory of struggling for freedom in its transcendent sense. "

Recalling the speech of former Uruguayan President Pepe Mujica, about 700 people, representatives of popular movements, political parties, civil society organizations and Landless activists gathered on December 8 at the Florestan Fernandes National School (ENFF), in Guararema, in the metropolitan region of São Paulo, for the Annual Meeting of Friends of the MST.

The opening panel included speeches by João Paulo Rodrigues and Gilmar Mauro, both from the national MST leadership, and from the former president of Brazil, Dilma Rousseff.

For Rodrigues, the activity represented a moment of consolidation of struggles and discussions about the course of the next period.

During his speech he also cited some MST statistics including the fact that in 2018 the MST occupied 60 unproductive estates and set up 800 encampments with 90,000 people.

The current repression against the popular movements and their leaders was also discussed. Just in 2018, 106 people were murdered as a result of conflicts in the countryside, of whom 13 were MST activists. In addition, the systematic increase in the number of arrests and inquiries opened against leaders of popular movements shows how the persecution of those who struggle for equality in the country has increased.

"Today, 152 MST encampments are threatened with eviction, but in spite of that, we are leaving 2018 with our heads high and with the certainty that we have increased our base of struggle," he said.

In 2018, the MST produced 600,000 sacks of rice in its cooperatives - leaving the movement in the position of the largest producer of organic rice in Brazil -, 1049 bags of beans, 800,000 bags of coffee and about three million liters of milk per day. In addition, this was the year that the MST fairs were consolidated as an organic and agroecological alternative. There are now 17 statewide fairs throughout the country and the national fair that takes place every year in the city of São Paulo for the fourth time in 2019.
Formation

In relation to the education promoted by the MST in the Agrarian Reform encampments and settlements during 2018, besides the groups already trained in different areas, thanks to the National Program of Education in Agrarian Reform (Pronera) and to agreements with federal universities all over the country, there were 61 graduating groups. In addition, 25,000 workers learned to read and write through the 'Yes I Can!' Program.

"These are just a few statistics, not only of the MST, but of the whole working class and of all the friends who support us," concluded Rodrigues.

Gilmar Mauro cited the historic period we are in, the concentration of wealth and the increase of poverty of the working class as a cause of the crisis facing not only Brazil, but also the rest of the world.

"Moments like these open the way for the rise of extreme right-wing governments as we have seen in many countries and now in Brazil. And to face this scenario, we cannot separate theory from practice. Social transformations depend on many hands and many organizations, as well as unity with a political project and undertaking concrete actions”, he said.

According to Dilma Rousseff, "when governments and institutions stop meeting the demands of the working class, politics becomes irrelevant. This causes far-right governments to gain space as we are seeing happen in the world. A country does not uphold democracy when poverty and inequality grow. That is why we must fight to maintain democratic processes, which includes the freedom of former President Lula. This demand should not be raised just because an innocent man was convicted, but above all because the arrest of Lula represents an attack against all those who fight for justice and equality in this country,” she concluded.