After national mobilization, a union of popular movements managed with the STF to extend ADPF 828, which prevents evictions until June 2022 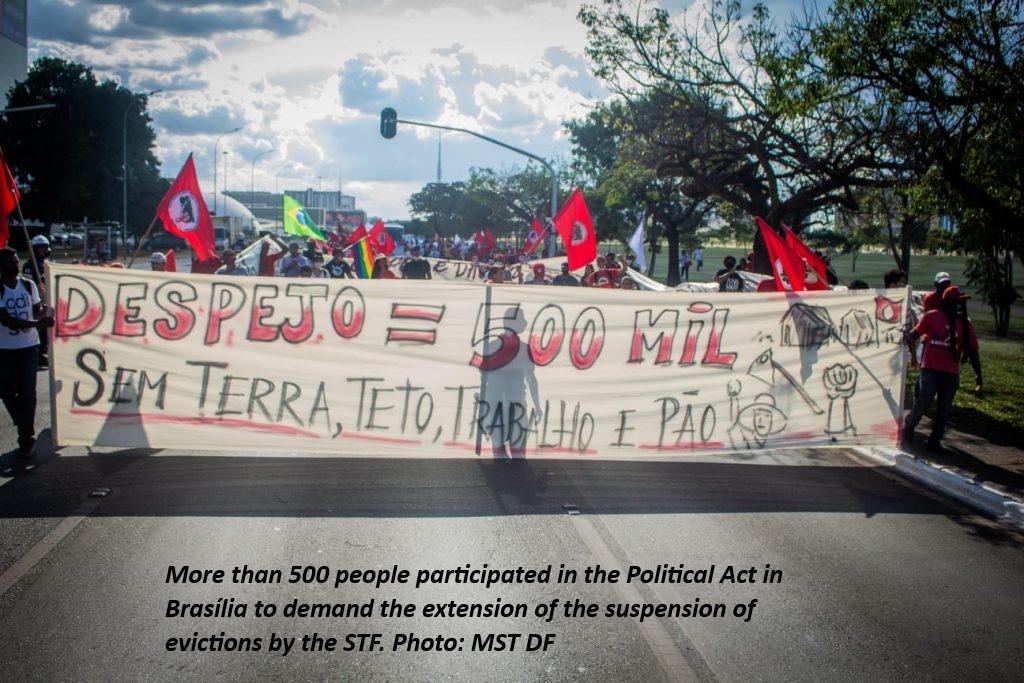 As the end of the Federal Supreme Court (STF) injunction that suspended forced evictions during the pandemic until this Thursday (March 31) is approaching, the Zero Eviction Campaign has convened several popular movements for national mobilizations across the country, with the intention of calling population attention on the imminent threats of eviction of thousands of families, in the countryside and in the city.

After the national struggle and the union of various urban and rural popular movements, activists and parliamentarians allied across the country and the Political Act “Brasil Sem Espejo: Por Terra, Teto e Trabalho”, held this Wednesday (March 30), in Brasília, With the participation of more than 500 thousand people, the STF extended the Arguição de Descumprimento de Preceito Fundamental (ADPF) nº 828, which prevents evictions during the pandemic until June 2022.

The decision was the second extension of ADPF 828, presented by PSOL in partnership with the Zero Eviction Campaign still in 2021 and had the sensitivity of the Minister of the STF, Luiz Roberto Barroso, in relation to the problem of access to housing and land during the pandemic, while maintaining the ban on evictions until June 2022.

The injunction was an achievement for popular movements, as it is yet another mechanism that seeks to guarantee the protection of 132,000 families, totaling more than 500,000 people, threatened and who could be affected by evictions during the pandemic and would lose their homes and territories, in the countryside and in the city, if ADPF 828 was not extended by the STF.

According to Kelli Mafort, from the national leadership of the MST, the extension of the injunction has historical significance and gives a little more impetus to the fight against evictions in the country.

“The decision was very important because it is part of a historic struggle of popular movements in the countryside and in the city for the legitimate right to occupy land. The occupation fulfills a social function in our country because the right to housing, the right to live, the right to land are guaranteed by the Constitution [of 1988], but if it is not for the people to organize, fight and occupy these empty spaces, the we can't get anything. So, it has a historical significance, but we need to keep the fight, keep the mobilization, because we gained a breath”, says the leader.

During the political act in Brasilia, the popular movements that are part of the Zero Eviction Campaign also sent 5,000 letters to the STF demanding the extension of the ban on evictions while the pandemic lasts. 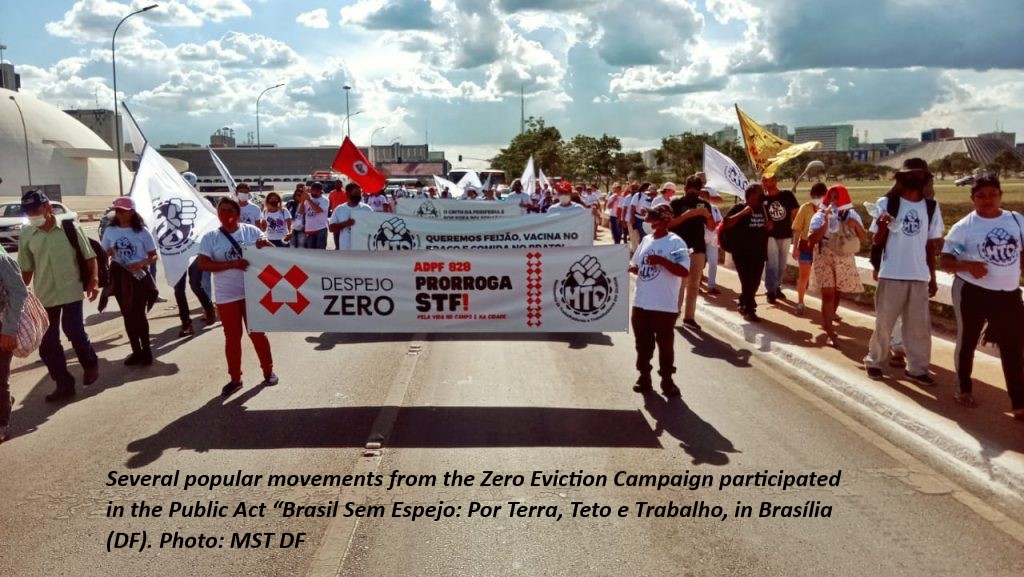 In this context, the Political Act in Brasília demanded the defense of the rights of Brazilian workers to land and housing, through the extension of ADPF nº 828, which had suspended evictions during the Covid-19 pandemic only until the deadline of March 31 of this year. The first injunction against evictions during the pandemic was granted in June last year, by the Minister of the STF, Barroso, in favor of suspending evictions and removals only until December 2021. 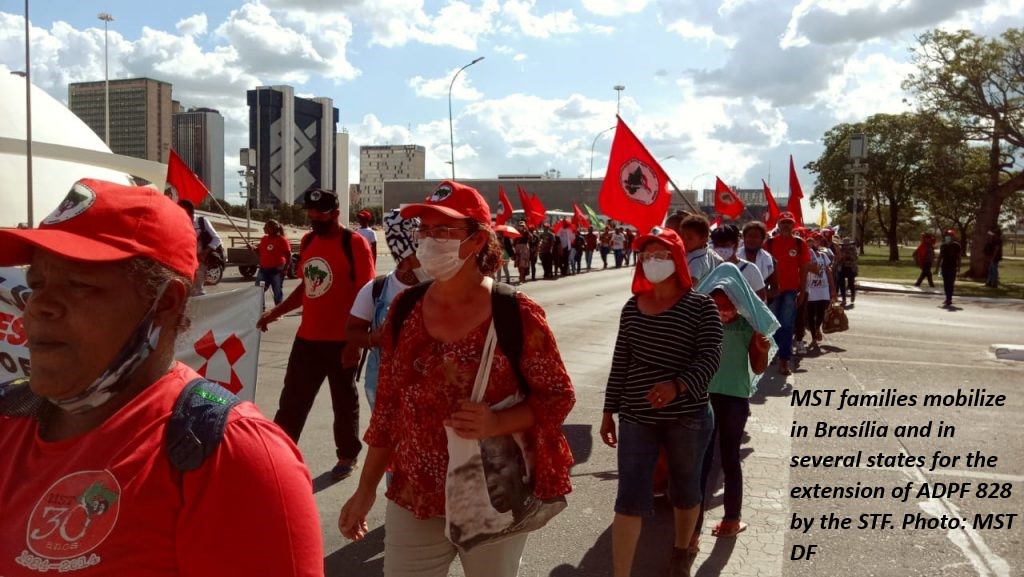 Among the people mobilized and threatened with eviction was Dona Silvéria, 108 years old, who is part of the Movement of Workers and Workers for Rights (MTD) and lives in the Beira da Mata occupation, in Aparecida de Goiânia (GO). She joined the mobilization in Brasília, for the extension of ADPF 828 and her right to housing and permanence in the occupation during the pandemic. 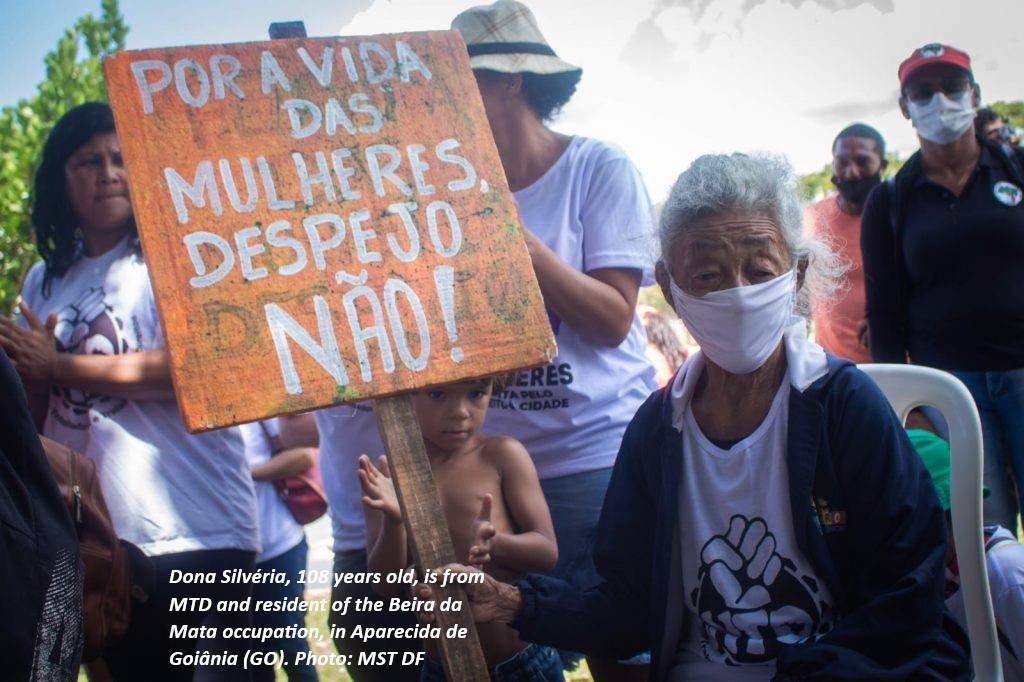 In this sense, even though the fight against evictions has gained momentum in the country, Kelli explains that the deadline is short. For this reason, she reports that the popular movements of the Zero Eviction campaign are also “knocking on another door in Brasília in the [National] Congress. We are asking for an audience with the president of the Chamber [of Deputies], Arthur Lira, and also for the Chamber to take a concrete position on a bill, for a new Zero Eviction law in our country so that we can get an even longer deadline.” 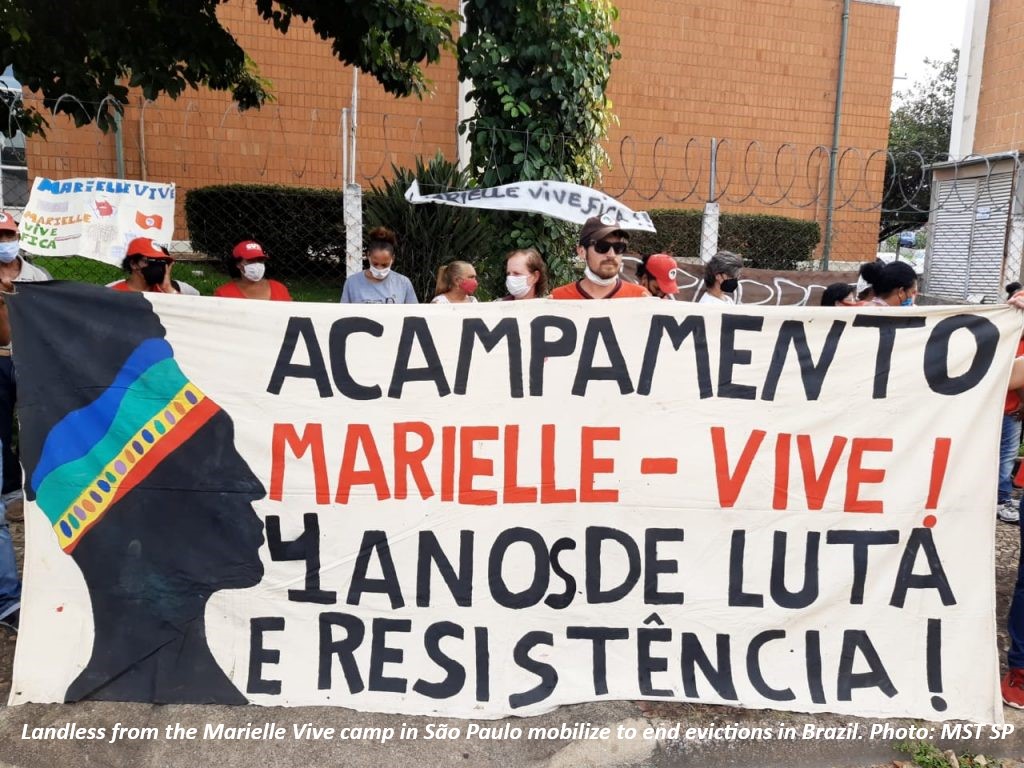 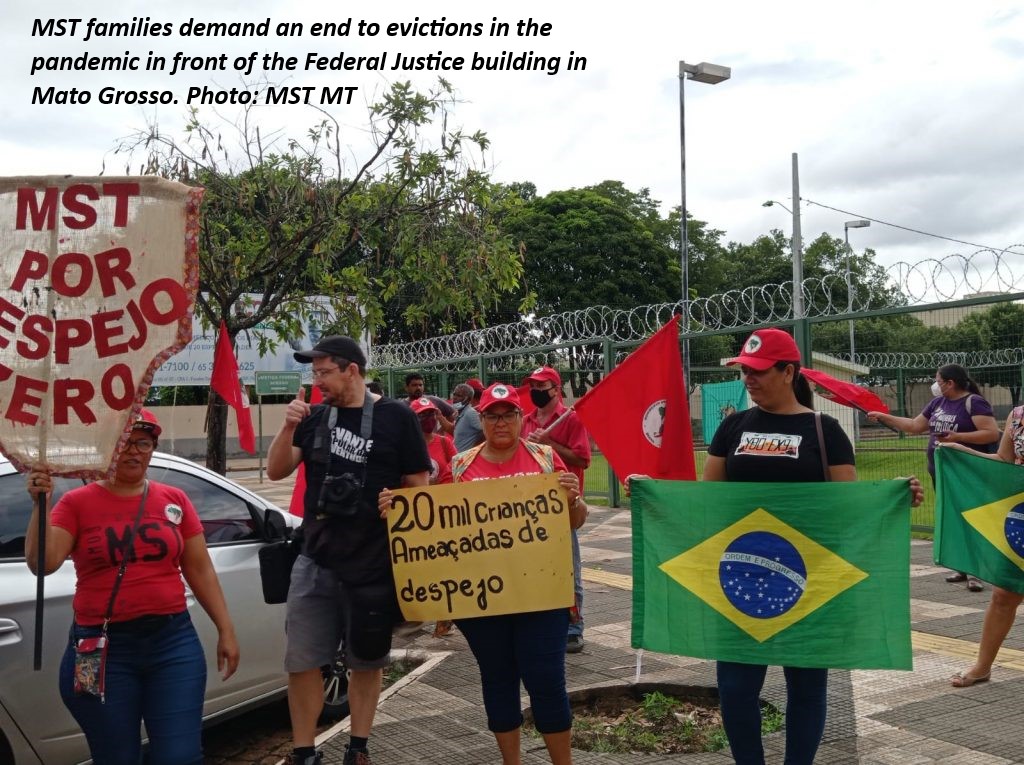 However, the fear of Brazilian popular movements remains because, even with the decision of the STF that prevented forced evictions during the pandemic, an assessment of the Zero Eviction Campaign shows that during the Covid-19 pandemic a total of 27,618 families were evicted from their homes and territories, registering a 333% increase in the number of evicted families, compared to the period of March and August 2020. 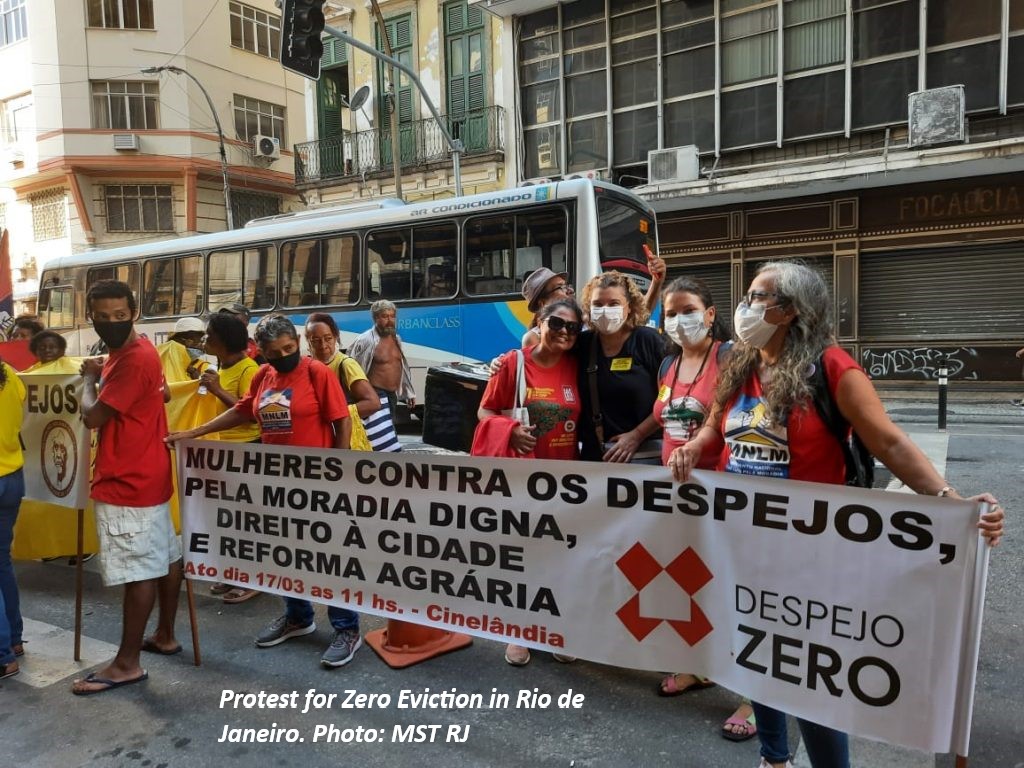 Tassi Barreto, from the state directorate of the MST in São Paulo, draws attention to the crime of eviction against families who are in a situation of vulnerability, especially in this period of pandemic. “Eviction is a crime at any time, imagine during a pandemic with as much hunger and unemployment as in Brazil”, he denounces. 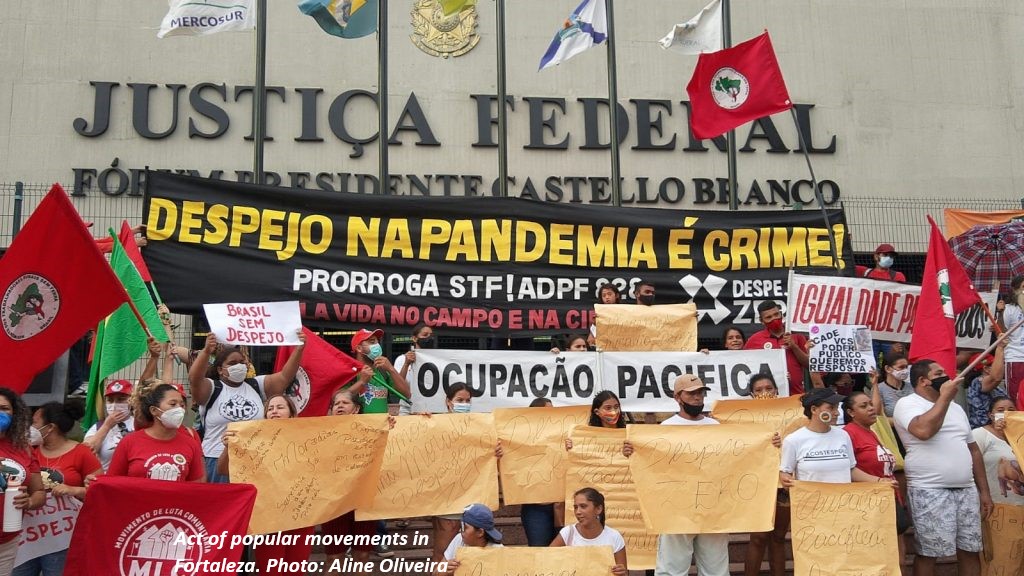 The Zero Eviction campaign was launched by a group of popular movements to protect the right to life, housing and territory for these families, demanding from the STF measures that help protect thousands of families in the countryside and in the city threatened with eviction or removal. forced.