A Coup That Still Cries Out

With the coup, Brazilian history recorded the event as a turning point and the beginning of an obscure, reactionary and proto-fascist period 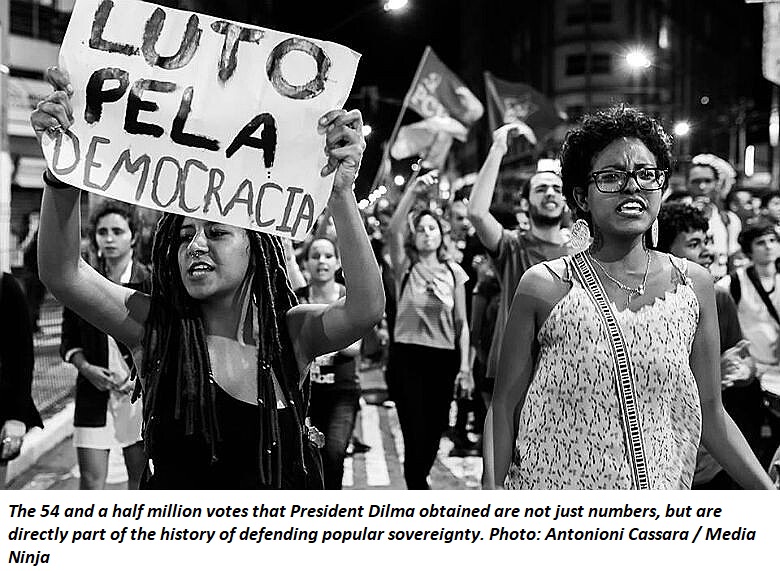 Four years after the 2016 Coup, which deserves to be written in capital letters both by the traumatic historical record and the consequences for capital, there are many who prefer not to recognize the very serious institutional breakdown that erupted the Brazilian democratic process and that caused Brazil’s promising future as a nation to stagnate.

But there is also an increasing number of people who recognize impeachment – some even confess a certain regret for supporting it –as an illegitimate political judgment, put together without legal bases and with a tremendous media appeal that gave impetus to the resurgence of the worst values and feelings between parliamentarians and sectors of society, values that we thought were defeated together with the rubble of the civil-military dictatorship.

Regardless of the finding that it was a coup or even if some are unable to understand the lack of legal support for the impeachment that led to the premature removal of Dilma Rousseff, Brazilian history will inexorably record the event as a tipping point and the beginning of a dark, reactionary and, in many ways, proto-fascist period.

It is clear that one of the objectives for the overthrow of Dilma Rousseff and to put an end to the Lula/Dilma era was the project of deeply destabilizing the economic bases assured by a social-developmental model, giving rise to an economy that benefits finance capital and steer away from any social commitment.

The balance, after four years, is generalized regression. This regression occurs in all areas that represented social achievements and distribution of wealth through public policies. The collapse of hard-won rights and social programs make it even more difficult to avoid worsening social inequality, as demonstrated by the increase in the number of unemployed (90.5 million) that this year once again surpassed that of employees in the country (83.3 million, according to IBGE sources).

Meanwhile this type of radical rupture forced us to think that the attack on the Dilma government not only generated the dismantling of the social and inclusive project for society, but also promoted, through a complex maneuver of legal-media persecution, the political unfeasibility of the leftist forces that had been ruling the country. The mega-operation Lava Jato, under the pretext of fighting political corruption, engendered an immense plot of international collaboration in order to fend off political forces, leaders and a national development project that passed through the main companies and strategic sectors of Brazil.

We still know little about the details and scope of this immense scheme of sovereign destruction and subjection to the interests of other powers, but it is certain that former judge Sergio Moro maintained close relations with members of Lava Jato and with international peers. He has frequently visited public and private entities in the United States dedicated to using the “fight against corruption” as a national strategic asset, through the use of extraterritoriality, something that all Latin America already understands to be a new strategy of regional economic expansion.

Since becoming the super judge, Sergio Moro has acted diametrically contrary to law and is already known as a famous lawfare artisan,a word that defines the use of legal instruments and the justice system to persecute and destroy politicalopponents. The revelations brought by Vaza Jato only confirmed what many jurists already deduced: from illegal wiretaps to the complementary relationship with media outlets, Lava Jato used everything to fend off the favorite candidate for the 2018 elections.

This maneuver was not restricted to the judiciary, but had the consent and direct participation of business sectors and in alliance with the right-wing parties and the so-called “centrão”, consolidating in power the political-economic elite that kidnapped the government to institute a policy completely subordinated to the interests of capital. It is important to highlight the strategically military and misogynistic, racist and latifundista nature, extending the political use of the law to other purposes and agendas, uniting lavajatista principles to the authoritarian bolsonarista agenda.

It is in this propitious context that we observe the delivery of national wealth to foreign capital in favor of foreign companies while intensifying offensives to the peripheries, populations and organizations of the countryside such as the Landless Movement, indigenous peoples and quilombolas.

It is not without reason that strategists around the world are studying these new institutional-media-legal-business coups– within the context of a hybrid war, established as a way to demobilize popular struggles through hybrid and mixed forms of attack: forced evictions, criminalization of struggle, the strengthening of armed para-state groups, the formation of militias in the countryside and in the city.

The social organization that served as a support in the construction of national sovereignty and democratic processes becomes the main target in the violent political-economic reversed to meet the needs of the prevailing neoliberal capital, causing a break with the democratic pact.

Here are the reasons for the 2016 Coup, which was planned long before, perhaps even before 2013, when we saw fascist demonstrations amid legitimate protests on the streets of big cities. Understanding that we are under attack is the only way to reorganize movements and struggles. The increase in violence of gender, race, class and environment is part of the symptoms of a Brazil submitted to this predatory system that needs to be denounced at the same time that we forge new strategies for a counter-attack.

To the Brazil of Bolsonaro, a byproduct of the institutional violence that represents male, white, elitist, conservative and violent male, we counter the tireless struggle at its opposite end: of the black, indigenous, LGBT, woman, poor and peasant working class. The legitimate legacy of the woman Dilma Rousseff and Brazilian democracy that has done so much for the people is the ammunition for these clashes and their 54 and a half million votes are not only numbers, but directly make up part of the history of defending popular sovereignty in the presence of a true Democratic Rule of Law.

*Ariane Araújo is a lawyer, member of the Human Rights Sector of the MST in Bahia and a member of ABJD Bahia

** Carol Proner is a lawyer, PhD in International Law and a founding member of ABJD – Brazilian Association of Jurists for Democracy