Culture is the best way to build working class unity

João Pedro Stédile of the MST, affirms “Culture is the best way to build working class 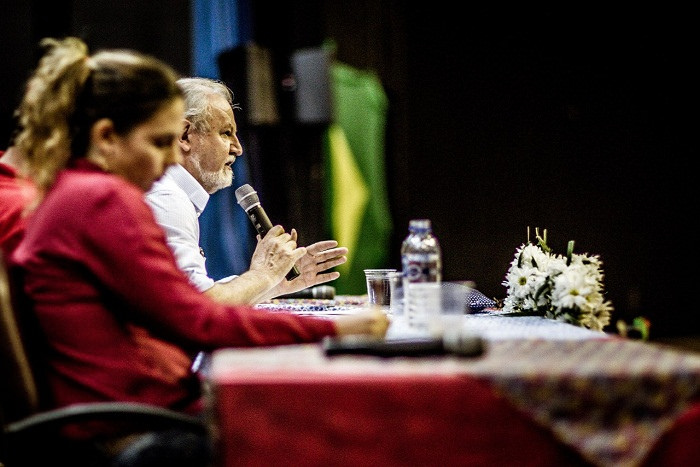 June 21, 2016 This is the analysis of Stedile and Beatriz Cerqueira, president of the CUT of the state of Minas Gerais, BR as they participated in a debate during the National Festival of Art and Culture for Agrarian Reform, in Belo Horizonte, capital of MG.

“Brazilian society is experiencing a profound economic, political, environmental and social crisis” stated João Pedro Stédile of the national leadership of the MST.

João Pedro and Beatriz Cerqueira, President of the Trade Union Central (CUT) of MG participated in a panel about the political conjuncture on July 21st in the capital of Minas Gerais, Belo Horizonte. The activity is one of many included in the National Festival of Arts and Culture of Agrarian Reform taking place from the 20th to the 24th of July.

“The economy has not grown in the past three years, there has been a 14% increase in unemployment and the electoral system is being held hostage. Today the people no longer believe in Congress nor its representatives”, stated the leader of the MST.

According to João Pedro, “the way out of these crises that Brazil experiences today depend on the construction of a new project and vision, that can unite a majority. There is a need to build a new vision”, he stated.

The leader of the MST emphasized that an important element of this new vision, is knowledge.  “This is the main weapon that we have if we want to change the world we live in. The working class needs to understand capitalism if it wants to transform it”.

“What we need to do is intensify our struggles”, commented Beatriz Cerqueira.  For Beatriz, the interim government of Michel Temer actively promotes the dismantling of the State, “privatizing everything that is public as quickly as possible”.

Beatriz emphasized the importance of strengthening our different struggles.  If we are united in the streets we will be able to face the upcoming period. She adds that it is important to find the demands that unite organizations and that in this case “our first struggle will be against the coup, against the break in democracy.  I don't take on this fight for Dilma Rousseff, but for the PT and for democracy”.

The National Festival of Arts and Culture of Agrarian Reform is thus, one more important tool to stimulate this new consciousness, according to João Pedro.

According to João Pedro, all of the Left is every day more “convinced that culture is the best way to build working class consciousness. The arts and culture, including culinary art, can and should be utilized as methods that cultivate alternatives to capitalism in the working class”.

Beatriz adds, “if we don't put art, culture, mística and faith in our lives, we run the risk of turning into the people we are fighting.”

More than 1500 MST members from the 19 states of Brazil are participating in this Festival.

The activity includes many events such as a Farmers Market of products produced by land under  Agrarian Reform, a Literary Fair, and a gastronomic fair with food from all regions of Brazil, film viewings of “Cinema da Terra” or Cinema from the Earth, shows, workshops on many themes, as well as the Poetry and Music Festival.
--
"Everything can be explained to the people, on the single condition that you want them to understand." - Frantz Fanon