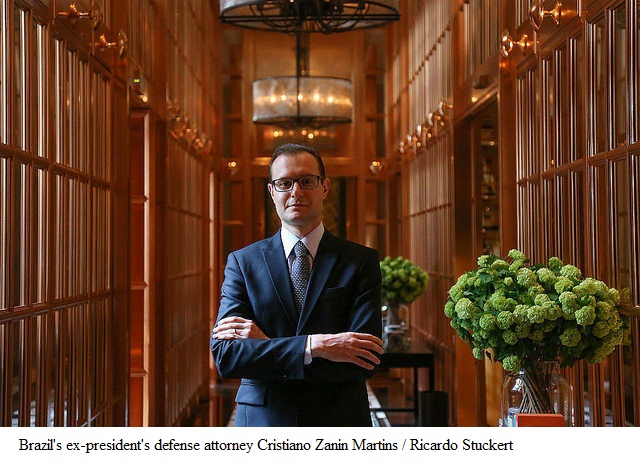 Brazil’s Supreme Court (STF) is ruling this Wednesday (4) on a preventive habeas corpus petition filed by former president Luiz Inácio Lula da Silva’s defense team, in an effort to prevent his arrest after an appeals court upheld a conviction. Today’s ruling will be yet another step in the ex-president’s defense’s fight to overturn his conviction and keep Lula’s political rights intact so he can run for president in this year’s elections.

In an exclusive interview for Brasil de Fato, Cristiano Zanin Martins, the former president’s defense attorney, explains the main arguments of the petition, denies accusations that his plea would aim to “pressure” the justices of the country’s highest court, and says the defense may take further actions after the ruling today.

“We are still looking into the decision by the appeals court on the motions for resettlement last week. After examining it, we will decide whether to file a new appeal to the same appeals court or whether we will file appeals to higher courts, that is, the Superior Court of Justice (STJ) and/or the Federal Supreme Court. Evidently, we have found several irregularities  in the case,” Zanin says.

Brasil de Fato: What are the arguments presented by former president Lula’s defense team in the habeas corpus petition that the Supreme Court will rule?

Cristiano Zanin: The habeas corpus petition is based on article 5, item 57 of Brazil’s Constitution, which clearly stipulates that an accused person is presumed innocent until the conviction becomes res judicata - that is to say “until their judgement becomes final and unappealable.” So the Constitution is very clear in this sense, there is no other way to interpret the presumption of innocence. And this is what we are asking the Supreme Court through this petition, to rule based on this constitutional provision, this constitutional rule, in order to ensure ex-president Lula is presumed innocent until the final judgement. We expect this conviction, first ruled by the Federal Court in Curitiba [capital of Paraná state, in the south region of Brazil] and then upheld by an appeals court, may be overturned, because it is not compatible with the law. For this reason, we aim that the former president can file these appeals and remain free while waiting the decision of higher courts, and not being arrested to start serving his sentence while it is still ongoing. Serving a sentence before exhausting appeals is not compatible with the presumption of innocence.

Although this Wednesday’s judgement is specifically on ex-president Lula’s habeas corpus petition, is there a direct link with the STF’s understanding on serving a sentence after a conviction if it is upheld in an appeals court?

In 2016, the Supreme Court ruled that it would be possible for a person to start serving a prison sentence after an appeals court upholds a conviction. What we are showing with this habeas corpus petition is that, while this was the understanding of the country’s top court, it is not compatible with article 5, item 57 of the Constitution, and therefore we are asking this interpretation to be reviewed. It’s important to highlight that after that decision in 2016, several Supreme Court justices have been ruling differently, observing the Constitution and making sure the presumption of innocence is secured until a final and unappealable judgement. So clearly there is dissent among the justices about this matter. And in face of dissent, we are asking the Supreme Court to set the precedent in ex-president Lula’s case for other cases as well. The fact that the top court will address this in session is an indication that it should set a precedent on the matter, even though this session is to rule on the former president’s habeas corpus petition.

Some news outlets reported the ex-president’s defense team would be trying to pressure the justices of the Supreme Court. Is that true?

That is absolutely not true. We, the defense, are only doing the job that is expected of attorneys. We have drafted the petition, taken it to court, and briefed the issue with the judges, and yesterday we presented a report by one of the country’s top constitutional experts, Professor José Afonso da Silva, who stands for the petition filed to the Supreme Court. So our actions are absolutely rightful, observing the law, and all ethical principles.

In addition to the habeas corpus petition, what other actions will the defense take after this judgement?

We are still looking into last week’s decision by the appeals court on the motions for resettlement. After examining it, we will decide whether to file a new appeal to the same appeals court, which would be appropriate if we find omissions in the sentence; or whether we will file appeals to higher courts, that is, the Superior Court of Justice (STJ) and/or the Federal Supreme Court. Evidently, we have found several irregularities in the case, several violations of fundamental guarantees, especially considering a conviction that, from our viewpoint, has no legal basis in criminal law. All these topics are addressed in the appeals that will be filed and we have high expectations that the conviction will be overturned in higher courts.

Former president Lula has said that, if the Workers’ Party caucus confirms him as a presidential candidate, there will be suits filed against him. From a legal standpoint, is that possible? How is the defense working to make sure Lula can run for president?

Despite the conviction in the Federal Court in Curitiba, bear in mind that, first of all, there is no final conviction, not even in that court, because, in theory, it is still possible to file appeals in that very court. Second, the criminal procedure does not have any definition regarding the possibility of running for president or not. If ex-president Lula is effectively confirmed as a presidential candidate, this matter will be addressed in electoral courts, observing due process. So this is a topic that is out of the scope or the debate addressed in this criminal case.