Elements of the situation in Brazil

We call on popular and political organizations and all those who fight for a fairer world to join the struggle of the Brazilian People! 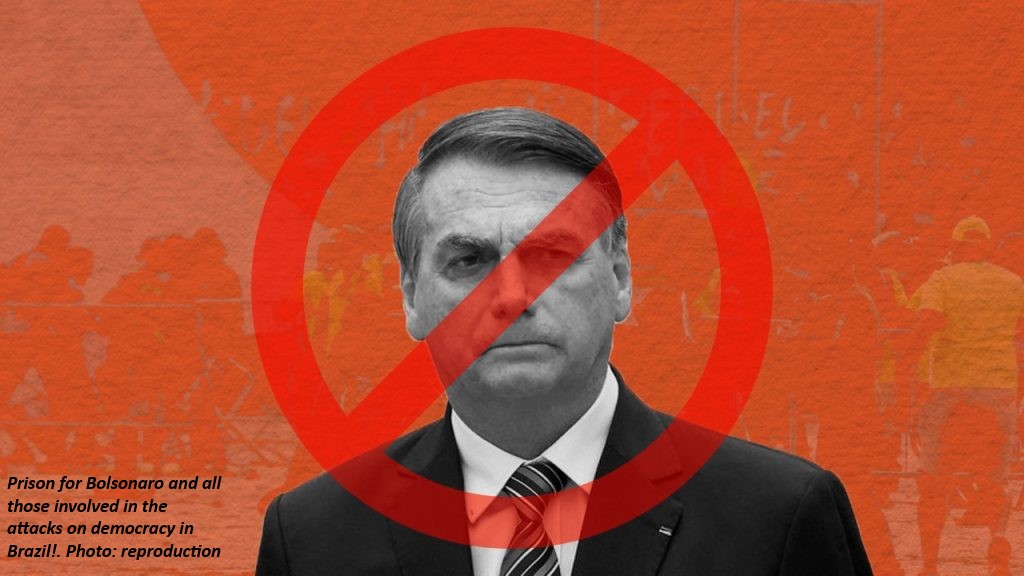 Sunday, January 8, a group of extremist supporters of Bolsonaro, oriented under neo-fascist slogans, invaded and looted the National Congress – seat of the Legislative Branch, the Planalto Palace – seat of the Executive Branch, and the Federal Supreme Court – seat of the supreme court.

The military corporations responsible for the security of the buildings of the three powers, commanded by the extreme right-wing government of the Federal District, did not move to prevent this attack. On the contrary, they acted as accomplices of the terrorists, escorting the group through the streets of Brasilia, facilitating their access to the premises, and already inside the Congress, directing the bandits to reach the plenary of deputies.

Brasilia is a city that is easy to control the human masses. The spaces are wide, the buildings are distant from each other. To carry out an action like that of the right-wing extremists, with such ease, it is necessary to have the approval of the security forces.

On Sunday itself, President Lula has decreed federal intervention in the security forces of the Federal District, and the Supreme Court determined the suspension of the governor for 90 days. Under the command of an inspector indicated by the Minister of Justice, the criminals have been controlled, their camps removed, and up to that moment some 800 people have been imprisoned.

In addition to the attack in Brasilia, the criminals tried to orchestrate attacks on oil refineries and roadblocks in order to paralyze cities like São Paulo, at dawn on January 9. None of these actions were successful, with the police acting, in general, in a preventive way.

President Lula, his ministers, Congress and the Supreme Court reacted to the coup and announced measures to investigate and hold the coup leaders and their financiers accountable, demonstrating cohesion in defense of the Democratic State of Law

It is possible to identify some of the pillars of this coup attempt in Brazil: agribusiness, an important financier of the coup plotters; evangelical pastors, important ideological trainers in the work at the bases; media that have inflated and misinformed; sectors of the Army and the Military Police, who got away unpunished from the military dictatorship and do not see themselves obeying the civil power.

In response to these terrorist attacks, the Brazilian people took to the streets yesterday. Millions of people, in all the capitals of Brazil and in hundreds of other cities, came out in defense of democracy and for the punishment of the participants, financiers and idealizers of the attacks. NO AMNESTY! It was the cry that resounded in all the mobilizations.

The peoples of the world joined the Brazilian people. There were demonstrations in the United States, Italy, France, Argentina, Germany, Switzerland, the United Kingdom, Mexico, Venezuela and Spain.

Even this week, demonstrations for Democracy in Brazil are planned in Portugal, Canada and the Netherlands.

The fascists called for new demonstrations for this Wednesday, January 11, at 6:00 p.m. in Brazil, in 20 capitals and in the Federal District, with the slogan: “national mega-demonstration for the take back of power.” According to their messages, “yelling is useless, we must cause social chaos, that is, shutdown, shortages and strikes.”

Popular movements and organizations in Brazil are calling for a major national mobilization in defense of democracy next Sunday, January 15th, in Brasilia

Meanwhile, Bolsonaro is still in the United States illegally, since he entered the country with a diplomatic passport, to which he is no longer entitled.

The actions perpetrated by the extreme right and fascist forces in Brazil are part of a global trend that puts in dispute the current forms of government under representative democracy seeking to ignore the right to vote and popular participation.