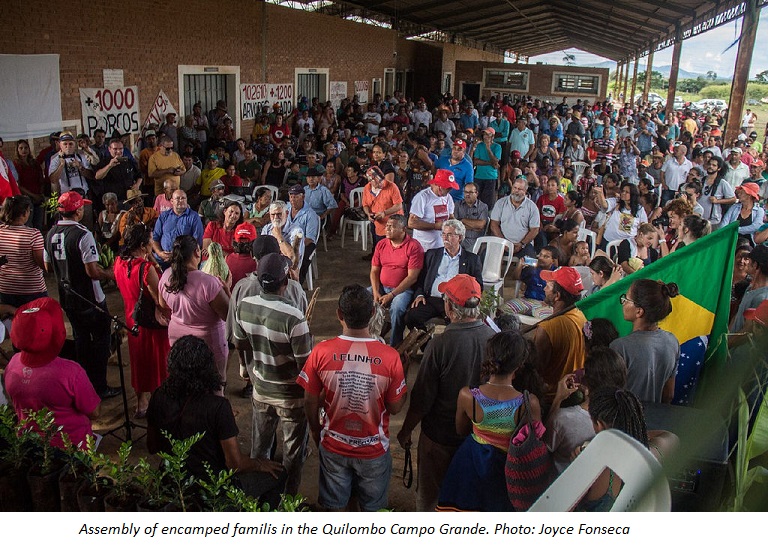 After 24 days of resistance against the injunction that ordered the eviction of the Quilombo Campo Grande Camp families, Judge Marcos Henrique Caldeira Brant suspended the decision of the Agrarian Court. He considered that the peasants "have occupied the rural area for a considerable period, approximately 14 years, with cultivation of coffee plantations among others, including buildings in which their families live," as the document states.

Families will be able to spend Christmas safely, but the MST warns that the final solution is to settle the 450 families who have been living in the failed Ariadnópolis plant in Campo do Meio-MG for 20 years. The situation needs to be regularized to ensure that they continue to work, produce and live off the land. In gratitude to society, the movement will distribute food at the city's fair on Sunday, 02, starting at 8 am.

Check out the note from the MST of Minas Gerais: Victory for Quilombo Campo Grande

Since November 7th we have lived through days of apprehension, struggle and resistance. Without knowing the time when the police could come to take away everything that was built in two decades of hard work, we organized ourselves to stay on the path of what we dreamed the most: the land.

There were many demonstrations of solidarity. We have many friends here. We worked together, incessantly, to denounce the injustice that was about to happen. The MST of Southern MG, the families of Quilombo Campo Grande can sleep quietly for today and have a lot to celebrate. We know that suspending the eviction is a partial victory, but we are celebrating a lot, because in times of the threat of fascism, every victory has to be celebrated with great force.

This victory was the result of many hands. It is a legitimate victory of the working class. More than 1,000 letters were sent to the Agrarian Court judge and more than 500 letters to the TJMG judge. We have received support from various churches, partners here in the region and from all over Brazil. Artists and communicators mobilized. More than 40 countries have interceded through various organizations. Our deputies were also instrumental in this achievement.

We thank you all! Especially to the people of Campo do Meio, to the merchants and councilmen: without you, our victory would not be possible! Let us resist together and show how the seeds we sow in Campo do Meio have generated strong fruits that need many hands to harvest.

We remain attentive, knowing that this was another step towards the conquest. Knowing the strength we have together we are more confident. This decision proves the legitimacy of the Popular Agrarian Reform Project. We continued singing and planting resistance until the final victory.