Put together by social movements, project seeks credit lines and technology to support water access, among other demands 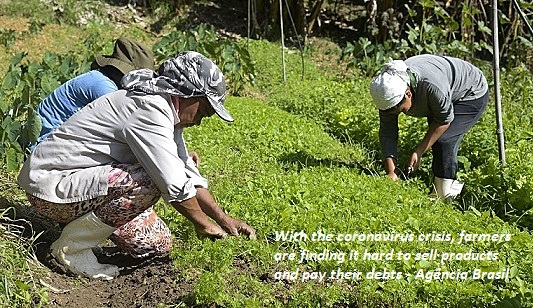 Congress may yet vote this week on a proposal that would provide emergency aid measures, guaranteed by the federal government, to family farmers during the pandemic.

Sponsored by 13 opposition lawmakers, the bill was created based on demands made by different agrarian social movements, who together are articulating ways to assure measures that benefit the segment, are present in those being framed to combat the worsening social and economic crisis besieging the country.

The intention is that these actions remain valid during the period of public calamity, slated to last till the end of the year. The secretary of the National Confederation of Agricultural Policy and Labor, Elias d’Ângelo Borges, tells us that these farmers are currently in a scenario of reduced sales while at the same time, struggling to pay their debts. This has arisen on the heels of the closure of open air markets and other social distancing measures related to covid-19.

The Landless Workers Movement (MST), highlights the fact that the family agriculture segment has been excluded from the relief measures implemented by the Bolsonaro government or approved by Congress in the face of the coronavirus crisis.

“Family agriculture and lots of other categories as well, but we are talking here about family agriculture, rural workers and land reform. People have had their emergency assistance denied. So you can easily see that even in a pandemic we have no support, no incentives,” affirms Antônia Ivoneide Silva from the MST production sector.

The proposed bill, PL 886, puts forth different measures on many fronts. Some of these include: establishing credit lines for people on settlements; the development of more settlements destined for 108 thousand families; the renegotiation of agrarian debts; guaranteeing water supplies and electricity free of charge; and the purchasing of items produced by 70 thousand rural families, among others.

The proposed measures may also benefit “quilombolas” (residents of rural communities founded by former slaves) and other agrarian groups. The law would also benefit 80,000 subsistence fishermen affected by an oil spill on the Brazilian coast line last year.

Alongside the proposed bill, social movements are trying to include a specific measure that extends lines of credit to women in the countryside.

Sarah Luiza de Souza Monteiro, an executive director at the National Agroecology Organization (ANA), tells us that this sector of the population has needs that must be considered in the project.

“Women are already over burdened, suffering even more with social distancing and the unfair division of domestic labor and care. They are tasked with feeding and looking after the family’s health, many times without being able to take care of themselves. We are also currently seeing an increase in all sorts of violence against women and we need public policies that contribute to improving their lives,” she posits, adding that if these specific measures are included, the “economic autonomy” of rural women will strengthen.

The social movements are also asking that the credit line be extended in the form of family agriculture products, not cash, as an incentive to the sector during the crisis. “We cannot allow, during a time such as this, that these women don’t have access to credit lines with which to advance their means of production. We need to urgently address this,” defends Antônia Ivoneide Silva, from MST.

Worker’s Party (PT) lawmaker and one of the bill’s sponsors, João Daniel, believes that the law will be approved. However, he defends that there should be intense mobilization to pressure congressmen.

Both the Congress and the Senate are dominated by large scale farming interests, which tend to drown out any efforts with actual benefit to the people.

To be voted into law, proposed legislation needs to be agreed upon by the leaders of different congressional groups.