Food Sovereignty: a challenge 25 years in the making

In opposition to the peasant´s struggle, the UN calls for a Conference with heads of states and private agents 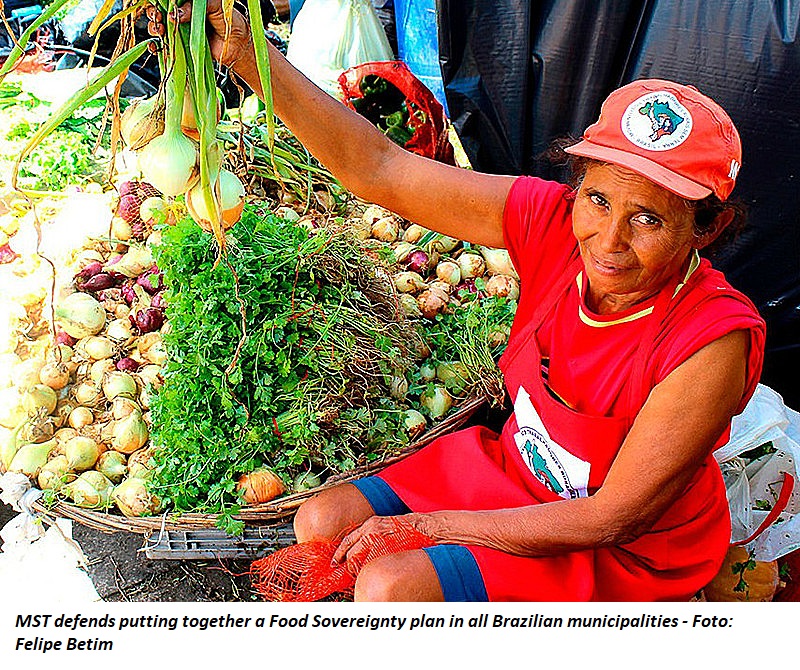 In the same year that La Vía Campesina celebrates 25 years of defining, building, and fighting for “food sovereignty,” the United Nations (UN) will convene a summit for heads of state, members of large businesses and private corporations, multinationals and agribusiness representatives to discuss food systems processes.

The Food Systems Summit, or FFS, will take place in September of 2021 during the week of the High-Level panel of the United Nations’ General Assembly. This summit will be held just as the world is experiencing a pandemic that has taken the lives of more than four million people worldwide, victims of COVID-19. At the same time, we see, as a consequence of the crises, the rise in the number of people who suffer hunger worldwide, as well as an increase in unemployment, poverty and violence. In this context the 25-year-long discussion on food sovereignty becomes all the more pressing.

The first conference of La Via Campesina was held in Belgium in 1993, following the founding of the organization in Nicaragua, and as a product of 500 years of Indigenous, Black and popular resistance. La Via Campesina was born as a global platform for the coordination of peasant movements. In this conference, the platform defined its primary objectives. One was the formation of relationships of solidarity between peoples and especially among peasants’ organizations. Another was, in acknowledgment of the diversity of the peasantry worldwide, the construction of a model of agricultural development that guarantees food sovereignty as the right of the people to define their own agricultural policies. It also called for the preservation of the environment and protection of biodiversity.

The objectives defined by the then newly founded Via Campesina had a clear strategy to oppose agribusiness, the standardization of cultures, productivity above all else, mono-cultures, and the model of agro-exploitation that characterize the agribusiness development model.

It is important to contextualize that these ideas did not come from the enlightened minds of peasant leaders and NGOs accessories who participated in the conference as invitees, but rather from the political and economic conditions that characterized that time period.

The decade of 1990 saw the most aggressive implementation of the capitalist model all over the world. Mainly through the work of the International Monetary Fund (IMF), neoliberalism, which sought to advance domination over nations and models of agricultural production, imposed legislative changes in nation-states which allowed for a larger circulation of goods between countries through lower costs and the removal of customs restrictions.

Neoliberalism promised total openness of borders in order to permit the free circulation of goods. It imposes on poor and developing countries processes aimed at diminishing the involvement of the State in the economy, thereby weakening states with methods like privatizations, especially those targeting public services and state-owned enterprises.

With the influence of the World Trade Organization (WTO), food became a commodity negotiated on stock exchanges beyond the control of agricultural workers who produced it. In contrast, large international corporations, the grand majority North American and European, came to control production, agricultural industry, stock/food stores, distribution and prices. Agribusiness continues to advance into new territories, promoting violence and the destruction of peasant communities for the benefit of expanding agribusiness and corporations over national sovereignty.

“Food Sovereignty” as a concept and battle cry was one of the definitions that came out of the second conference of La Via Campesina, which took place in Mexico in April of 1995. At the same time, in the Pará state of Brazil, the massacre in El Dorado dos Carajas took place on April 17.

At this same meeting, motivated by a profound indignation about the massacre and with the 19 dead weighing heavily over the meeting, the 17th of April was defined as the global day of peasants struggles. The conference defined food sovereignty as a counterpoint to the institutional definition from the UN on Food Security, created in 1985 with the objective of guaranteeing all people, independent of their situation—in war, civil war, calamity, catastrophe, or conflict—all people have the right to food, as an international right and as an obligation of States and international organizations.

If this concept were effectively implemented, it could end world hunger. Yet still, hunger is one of the largest problems in a world produced mainly by the high concentration of wealth in the hands of a minority, while the vast majority of people live in subhuman conditions, far below the poverty line. Food Security does not concern itself with the type of foods, nor the conditions in which agricultural workers produce them, many times with exploitative costs, child labor, slave labor, environmental destruction, forced work from women and youth, and all the adversity and violence committed against peasant families that are expelled from their lands and territories in order to expand the frontiers of agribusiness.

Food sovereignty, which has been 25 years in the making, comes from discussing the idea that it is not nearly enough to simply get food to people. We began to discuss what type of food, the conditions of its production and the relationship between this food and the production processes with work, with the environment, and with local and native communities. Food production must promote a healthy relationship of coexistence with the environment, with dignified working conditions. Food production must be connected to the idea that the food produced should be healthy, free of chemical products and agro-toxins, from seeds produced by peasants themselves.

Food sovereignty is intrinsically linked to the debate over what we envision for rural areas and what type of development should be applied, as well as what type of food to produce. And why do we want to produce? To prioritize production for local markets, in line with a culture of local and regional consumption. Sovereignty allows us to think strategically in order to disrupt the control that the policies of the WTO and large corporations have over food markets.

For La Via Campesina, food sovereignty is much more than a concept, it is a development strategy and a way of living in the countryside. It is a principle that should guide peasants’ organizations all over the world. Therefore, to define food sovereignty as a principle is to also define a strategy for struggle. In these past 25 years of food sovereignty, many struggles and mobilizations have taken place. In particular, we can recall the struggles that happened in Europe during the 90s, against the intervention of the WTO in the production and sale of agricultural products.

We mobilized and fought against genetically modified seeds, the so-called transgenic seeds, in defense of seeds as “world's heritage”. Here I remember women’s actions during the World Social Forum in Porto Alegre, when an international women’s collective staged a protest which destroyed one of Monsanto’s transgenic seeds research centers. Following from this action, La Via Campesina came to declare: “seeds, as the people’s patrimony and in service to humanity, should be preserved and produced for peasants as an indispensable part of the production of healthy foods”.

In defense of food sovereignty, many struggles have taken place all over the world, as we saw at the end of 2020, when peasants in India mobilized against the conservative government, which was destroying public policies concerning rural areas in order to open space for agribusiness and foreign agricultural companies. There was also the struggle to build a development model of “Good Living” in rural areas in Bolivia, according to the “Peasant to Peasant” method developed in Cuba to increase agro-ecological production. But I would like to conclude by remembering three leaders who left their mark on these past 25 years and who left us lessons on how to defend food sovereignty.

To remember comrade Lee, as we called him, Lee Kyang Hae, a 55 years old Korean farmer who, on 10 September 2003, during the 5th Ministerial Reunion of the World Trade Organization (WTO) in Cancun (Mexico) sacrificed himself while carrying a sign that said “The WTO kills farmers”. He gave his life for the cause and his death was a message: “Either die fighting or die weakened by hunger, or losing the peasant identity”.

To remember our comrade Joseph Bové, French, still alive, as an important comrade in La Via Campesina’s history of struggle. He led mobilizations in France at the beginning of the century in defense of food sovereignty and against the intervention of agribusiness in food production.

And, finally, to remember comrade Egídio Bruneto, who left us early as a victim of an accident. He was part of the National Board of the MST and member of the International Coordination of La Via Campesina. As part of the fight to defend seeds as World Heritage, whenever he traveled he carried some seeds hidden in his pockets or in his suitcase, which he gave to the peasants in a personal and conspiratorial way, and when he returned from the trip he carried out the same exchange of seeds, few, sometimes hardly any, but he gave seeds to activists that fit the climate and region of origin of the seeds. He taught us to exchange and globalize both the struggle and the seeds themselves.

Food sovereignty exists as a right of the people to define their agricultural and food policies. To produce food, healthy food, for all the people.

* Jaime Amorim is a member of the National Board of the Landless Rural Workers’ Movement (MST) and part of the International Coordination of the Via Campesina.