Joao Pedro Stédile: “Temer’s government is over, but he hasn’t fallen yet because the bourgeoisie hasn’t found a replacement”

Joao Pedro Stédile is not only a fundamental part of the Landless Rural Workers’ Movement, 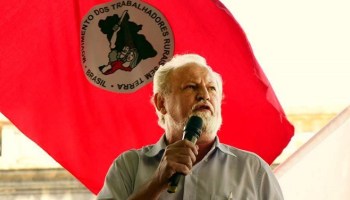 but also a member of the Brazil Popular Front, which as of late has become Michel Temer’s worst nightmare.

In this interview, by our collaborator Geraldina Colotti, Stédile addresses the current situation in Brazil, and the probable exits to the crisis, including Temer’s fall and the call to direct elections now.

Do you believe Temer can fall? How could this be achieved? Who’s backing him now?

Yes, de facto, Temer’s putschist government is over. He no longer has the support of big capital, nor support of the media—namely of the Globo media network, which is campaigning day after day to remove him from the government. And his Parliamentary forces are divided. His useful life is over, but he hasn’t fallen yet because the bourgeoisie hasn’t yet found a candidate who can represent the unity of a block, to be elected indirectly by the Congress, and then move on with the agenda of reforms agenda that harms the rights of the people and removes labor rights.

On June 6, Temer will be tried for an old process that was intended to depose both him and Dilma, [when he was Dilma’s Vice President]. The problem for the establishment is that, if they remove him through that method, the Supreme Federal Court could rule for direct elections to be called for a new President. There is jurisprudence on this matter, that in the last weeks led that same Court to end the mandate of a governor of the state of Amazonas and call to direct elections to replace him.

So, I believe that the forces of capital are restlessly looking for this unifying candidate, to get Temer to resign, and to appoint that candidate through indirect elections.

If they don’t manage to find a candidate by June 6, they can get a judge to buy some more time through a ruling.

To grassroots organizations, what’s important is that now the forces that made the coup are divided and don’t have a common tactic. Right now, the longer Temer remains in power, the weaker they are, because this guy is a lumpen, who can even go to jail after leaving the Presidency. Therefore, he wants to leave the seat with an agreement to let him fly to Miami and avoid prison.

As in other “soft coups,” Temer is no longer useful to his handlers. Who could the next person be, and what agenda will he or she push?

Of course, the true motive of the coup was not only displacing Dilma—it was the bourgeoisie’s attempt to completely control all of the powers—media, justice, parliament, and presidency— to impose a neoliberal agenda.

This agenda was intended to save their companies from the economic crisis and dump all of the negative consequences on the working class. That’s why we now have a 15% unemployment rate and over 20 million unemployed workers. And they’re imposing different legislative measures to remove the rights of the working class. Our social laws are now comparable to the early 20th century. That’s why the people began to protest this year, when it became clear that the coup was against the masses and their hard-earned rights.

Now the bourgeoisie is looking for its candidate, which isn’t easy, because it has to unify them and at the same time have some degree of public credibility. As of now, they have tried with Nelson Jobim, Henrique Meirelles (the current Finance Minister), and Rodrigo Maia (President of the Chamber of Deputies)—but there’s a problem with each one of them.

Therefore, some sectors of their own forces are beginning to say that the solution may be direct, anticipated elections this year, and let the urns decide.

What’s the situation after the general strike and the recent demonstrations?

Our take is that the workers began to mobilize with the demonstrations of March 8, then we convened a massive demonstration on March 15, and we paved the way for the general strike on April 15. Then, we called for solidarity with Lula, who was facing a trial in Curitiba, and 50 thousand people came to the Curitiba square. And the most recent one was the mobilization in Brasilia, with 150 thousand people. This mobilization was repressed by the state forces, and the political act was cancelled. Temer even called the armed forces, because he feared that the masses would occupy the Congress and the Palace. On the other side, demonstrations by the right ceased. They have no strength anymore, nor courage to take to the streets as they did throughout 2016.

On our side, the side of union centrals and the people’s movements that are nucleated in the Brazil Popular Front, we are still in the trenches, preparing new mobilizations because we will only defeat the coupist right on the streets. So next June 5 we will make a general meeting to convene a “Broad Front for Direct Elections Now,” which is going to bring together unions, parties, churches, people’s organizations, artists, and more, to plan out a national calendar of struggle for direct presidential elections in October this year.

Unions have already convened a new general strike for June 26 to 29, which all people’s movements will join. The strike is now becoming more political, because it’s against the reform of social security and labor laws, and at the same time it supports the claim for direct presidential elections. It’s noteworthy that all unions are united now, even though two of them had supported the coup.

The PT will hold its congress in June. What can change? What will social movements demand? Can this party be reformed? Is there any novelty in the political scenario?

I’m not a part of the PT and therefore I can’t predict the changes that this congress will bring. I know there will be changes in the national direction, and that Senator Gleisi Hoffman will take on that role. The changes in the PT’s strategy, as a part of the Brazilian left, will depend on the changes we achieve through class struggle, and Lula has good chances if he runs in the elections, and he will surely have a new plan, now with a program for the people instead of class conciliation.

The Brazil Popular Front has presented an Emergency Platform for the People. What’s the role of this platform?

After many months of collective work, the Brazil Popular Front, which nucleates over 80 movements and parties, has created an Emergency Platform for the People. This program will be useful to debate with the people, to prove them that Brazil is a rich country with a bright future, and that there are solutions to the economic, political, social and environmental crisis we live in. But these measures should benefit the people, solve their problems and not those of the bourgeoisie.

So, the platform will be a powerful tool to promote debate, to create awareness in the masses, and to accumulate strength for the future. The program is divided into ten chapters about the diverse fields of social life, and proposes concrete emergency measures, that a post-Temer government for the people should adopt.

In a scenario where direct elections are held, could Judge Moro run as candidate?

Judge Moro has no moral authority due to his partial and persecutory actions against the PT. So much so, that the last judicial measures that denounced the corruption (and led to the destitution) of Senator and candidate Aecio Neves, led his sister and a nephew to jail, and led several politicians to trial, were carried out by the Supreme Federal Court, not by Moro.

The right, luckily for us, is divided in terms of candidates for a direct election, whether it is held in 2017 or 2018. Several names are on the table, but none has the support of the people. That’s why they fear Lula so much, because Lula represents the unity of the people.

They need to buy time, that’s why they defend indirect elections, to see whether Globo manages to create a candidate through molding the public opinion, which is common in the countries of the region right now. But I think people are more aware, and it’s hard for them to believe in another Collor de Mello—or a Brazilian Berlusconi—in the short term.

As in Italy, the role of judges will be of key importance for the bourgeoisie to change its representatives. What will change in Brazil?

Judicial powers in Brazil and in all of Latin America—save for the countries of the ALBA (Cuba, Venezuela, Nicaragua, Ecuador and Bolivia)—are still monarchic. They’re not republican. Society has no control over them whatsoever. The top seats are held for life, and are appointed by the government. There’s no democratic criterion applied. In our countries, the judicial power is merely an instrument of control of the bourgeoisie, without any sort of disguise. That’s the reality.

Therefore, people’s movements propose that after defeating Temer and choosing a new president, we need to convene a Constituent Assembly, that establishes different methods to elect the people’s representatives, in order to make a political reform of the electoral system and of the judicial system.