Lawyers file appeals and call for mobilization to free Lula 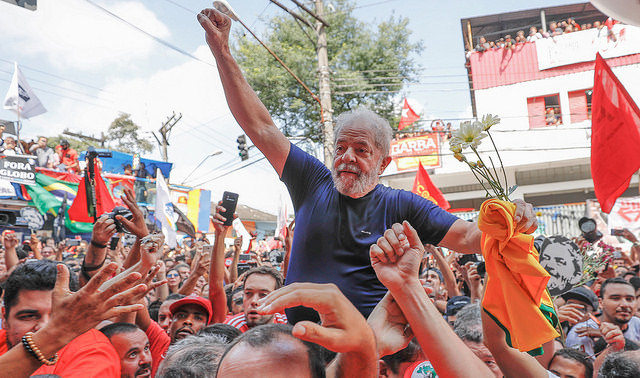 As pro-Lula protesters built a resistance camp outside the Federal Police office in Curitiba [capital city of Paraná state], where Brazil’s former president Luiz Inácio Lula da Silva is being held, lawyers say they will continue their efforts to appeal his case and get his release. Jurists and social movements call supporters to keep fighting on the streets and in court to show their support for the ex-president.

“The legal approach now is to fight for president Lula’s release by filing habeas corpus petitions. The defense has already filed two, one with the STJ [Superior Court of Justice] and one with the STF [Supreme Federal Court]. "These requests can only be granted if solidarity and mobilization are intense. Lula is a world-renowned leader and I am sure the solidarity abroad and in Brazil will help us get him out of jail,” said Patrick Mariano, an attorney with a post-graduate degree in Law, State, and Constitution from the University of Brasília (UnB).

Lawyer Ney Strozake recalls the direct actions for the declaration of constitutionality, or ADCs, that  the Supreme Court is expected to rule on next Wednesday (11). Supreme Court Justice Marco Aurélio Mello is expected to bring a preliminary injunction to court filed by the National Ecologic Party (PEN) to suspend sentences upheld by appeals courts that are still appealable, which is the case of ex-president Lula. Another similar ADC, filed by the Brazilian Bar Association, is also pending a ruling by the Supreme Court.

Strozake says the top court is expected to rule in favor of suspending sentences, this time with a 6-5 vote. “Then Lula’s defense will have to file an appeal based on this new ruling. It’s a game of chess, anything is possible,” said the lawyer.

One of the ex-president’s defense attorney’s, Valeska Zanin, claims Lula is clearly a victim of political persecution, as his case and sentence were handled in an authoritarian fashion.

“In the case of the apartment [that Lula is accused of receiving as a bribe from construction company OAS], we produced evidence of his innocence. Also, 73 witnesses said he is innocent. But none of that was taken into account and Lula was convicted anyway,” said Zanin.