Lula ‘has been kidnapped,’ jurist says on legal battle to keep ex-president in prison 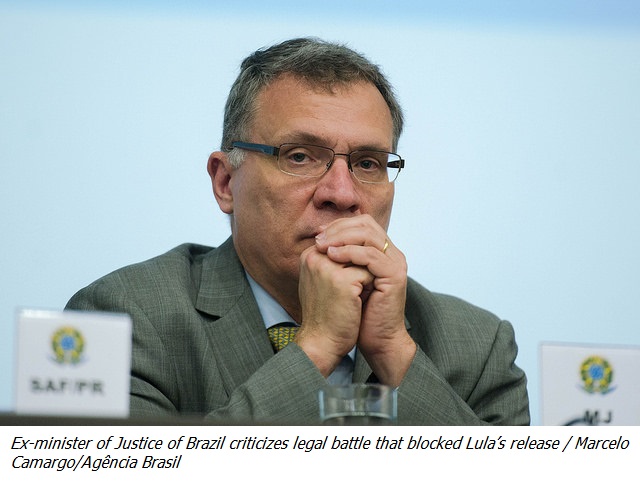 “Lula is not a prisoner. Lula has now been kidnapped,” said jurist and Brazil's ex-minister of Justice Eugênio Aragão after an order by duty judge Rogério Favreto to immediately release Brazil’s ex-president Luiz Inácio Lula da Silva was not enforced last Sunday.

Favreto’s jurisdiction was first challenged by the trial judge, Sérgio Moro, who is in Portugal on vacation, but was notified by the Federal Police about Favreto’s ruling. Afterwards, the release order was overturned by the chief appeals judge overseeing the so-called Car Wash case, João Pedro Gebran Neto.

After Gebran Neto overruled Favreto’s ruling, the duty judge issued a new order on Sunday afternoon for Lula to be release in one hour, but was once again overruled by the chief justice of the TRF4 appeals court, Carlos Eduardo Thompson Flores. Now Lula remains in prison.

“Moro has no jurisdiction to meddle in this, let alone challenge the judge of a court he is subordinated to. He does not have that power,” Aragão argues.

The jurist explains that no judge on vacation, especially a trial judge, has the authority to rule on something challenging an injunction. “What’s happening is absurd,” the former minister said. “Only people mobilizing can stop this kind of behavior. We are all scandalized,” he said.

Congresswoman Jandira Feghali, from the Communist Party of Brazil (PCdoB), agrees with Aragão  when he says Lula was kidnapped by the court system, because, even though there was an order to release him, the former president was not freed.

“There is a clear decision to release him and it is not being enforced. It’s an illegal kidnapping. He is being held illegally. ‘Kidnapping’ is really a word that fits right now,” Feghali told Brasil de Fato Radio.