Brazil’s top court rules against ex-president’s petition by a 6-to-5 vote; Chief Justice broke the tie 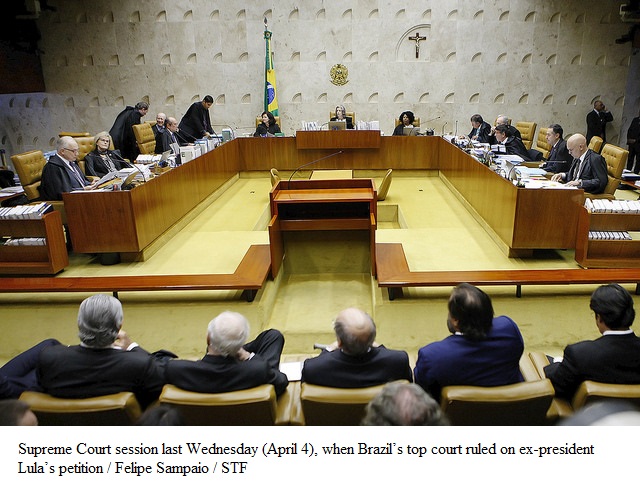 After Chief Justice Carmen Lúcia delivered her opinion in last night’s session (4), by 6-to-5 vote of the Supreme Court of Brazil (STF) ruled against the preventive habeas corpus petition filed by ex-president Luiz Inácio Lula da Silva’s defense team in an effort to prevent judge Sérgio Moro to order his arrest.

While casting her tie-breaking vote, Carmen Lúcia, who was appointed to the Supreme Court by ex-president Lula himself, said she stood by her opinion delivered in a 2016 case, when she voted in favor of sentence serving after a conviction is upheld by an appeals court. “I don’t see it as a rupture of or an affront to the presumption of innocence to start serving a sentence after the submission of evidence is closed,” she said.

Justice Alexandre de Moraes, who delivered his opinion right after the judge-rapporteur, made a case for relativizing fundamental rights to deny Lula’s petition to remain free. “Fundamental rights are relative. They can be relativized by the judicial power,” said the least-experienced justice on the bench.

The fourth justice to deliver his opinion, Luis Roberto Barroso, said he was not ruling on the ex-president’s conviction. “I did not read the appellate decision,” he said, explaining his opinion was based solely on the possibility of a person serving a sentence after a conviction is upheld by an appeals court. “The system does not work well at all, and for all these reasons, Madam Chief Justice, I believe we must follow the legal understanding we reached in 2016,” said Barroso.

The most unpredictable vote was cast by justice Rosa Weber, who decided to stick strictly to the principle of collegiality, following the top court’s 2016 decision, when the justices ruled that defendants who have their conviction upheld in an appeals court could start serving their sentence. Although two years ago Weber voted against sentence-serving while a conviction is still appealable, she mentioned the Supreme Court’s decision to explain her opinion yesterday: “Executing the sentence for a criminal conviction, even when there may be special or extraordinary appeals, does not compromise the presumption of innocence,” she argued.

Justice Luiz Fux also voted with the judge-rapporteur and relativized the presumption of innocence principle and the so-called res judicata, when the judgement becomes final and unappealable. “The presumption of innocence is over when a court finds the defendant guilty. An appellate decision that upholds the conviction, which is not illegal or unfair, unequivocally establishes the defendant’s guilt,” said Fux.

Justice Gilmar Mendes was the first to deliver a concurring opinion and cast a vote in favor of Lula’s habeas corpus petition. Dias Toffoli followed suit, saying he understands the former Brazilian president could only be arrested after exhausting all appeals in a higher court, that is, the Superior Court of Justice (STJ).

Marco Aurélio de Mello highlighted the civic character of the Brazilian Constitution, enacted in 1988, which stipulates “precepts of the utmost importance,” such as the presumption of innocence. “It’s crystal clear [in the Constitution] (…) that no one can be considered guilty before their criminal conviction is final and unappealable,” said the justice.

After Weber cast her vote, justice Marco Aurélio Mello, opposing imprisonment after an appellate decision, claimed Chief Justice Cármen Lúcia employed a strategy to deny Lula’s habeas corpus petition. “Strategy wins, Your Honor did not bring up the ADCs [direct actions for the declaration of constitutionality],” he argued.

The justice was referring to direct actions for the declaration of constitutionality (ADCs in the Portuguese acronym) that question sentence serving after an appellate decision. The National Ecologic Party (PEN) and the Federal Board of the Brazilian Bar Association filed these two actions with the Supreme Court to suspend the execution of all appellate decisions for all cases pending appeal. Mello is the judge-rapporteur in these actions.

The Chief Justice decided to rule on Lula’s habeas corpus petition before these ADCs, which are pending the ruling by the Supreme Court since December, 2017, before the ex-president’s petition was filed. Justice Mello has requested several times, to no avail yet, to docket the actions so the Supreme Court decides on one interpretation of the matter.

Lula watched most of the Supreme Court session with Workers’ Party leaders and social activists at a local Metal Workers’ Union in São Bernardo do Campo, in the state of São Paulo.