The MST awards the “Struggle for Land” Prize to 22 fighters

More than 600 people attended the award ceremony, which on significant dates is conferred on people who stood out in defense of 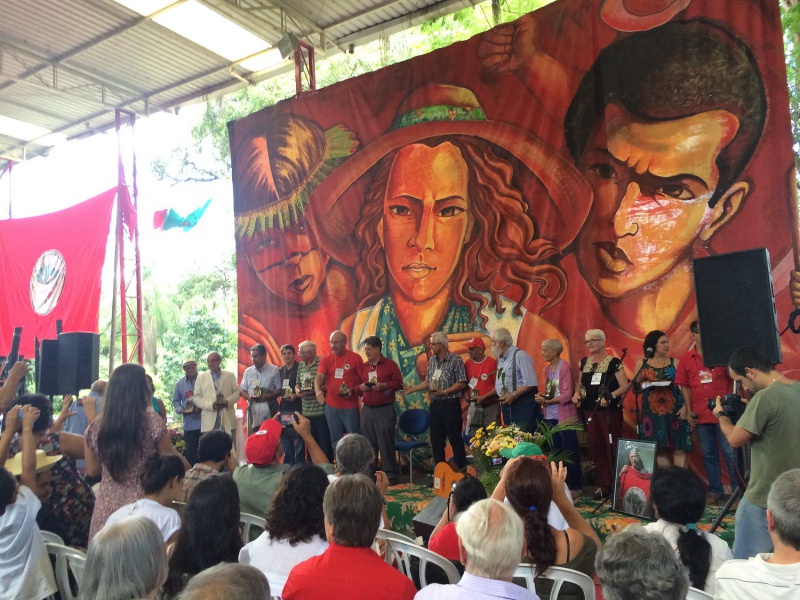 peasant struggles, agrarian reform, and a socialist society. The “Struggle for Land” Prize was awarded on January 24, 2015 at the Florestan Fernandes National School in Guararema (SP).  The award was last given in 2009, in celebration of the MST's 25th anniversary. Now the landless share the award again to celebrate the 30th anniversary of the Movement, completed in 2014.

Erivan Hilário, a member of the pedagogical political coordination at the National School, said that over its 30 years the MST never lacked solidarity and support for the struggle. "The hardest times were overcome only because we were not alone. We face the uncertainties and unknowns in politics, backed by the collective discussions and contributions of all who strive to achieve the same ideals of a socialist society. "

For João Paulo Rodrigues, of the national coordination of the MST, the Movement is excited about this new cycle of struggles and confrontations that is opening up. "Our responsibility is to take to the streets to defend the achievements, but above all, to build a popular and socialist project for the country."

To remember some losses in 2014, such as Dona Ilda and Cidona, historic MST activists, as well as Leandro Konder, Plínio de Arruda Sampaio and Dom Tomás Balduíno, Rodrigues said that the MST came out of this situation strengthened, having settled"with great sacrifice," more than 20 thousand families, and bringing "to the ranks of our encampments more than 45,000 new families in 2014."

In addition, to highlight the partnership with dozens of public universities with more than 62 undergraduate courses, specializations and master's programs, "with more than 3,600 Landless Brazilian activists occupying Brazilian universities to study and take up the struggle.”

When talking about People's Agrarian Reform, Rodrigues looked at its main component: the struggle. "The struggle is going to allow us to train new staff, face the bourgeois state and make alliances with their sectors. This is the commitment of our Movement with the friends and colleagues who are here.”

He concluded by recalling that the MST has set the challenge "of making 2015 the year of political education in the Movement. A combination of three elements: political organization, study and participation in the struggle, because our main university is the occupation of land. "

Winners of the Award

Accepting the award, Virgínia Fontes, professor at the Federal Fluminense University, celebrated 30 years of the MST and 10 years of the Florestan Fernandes National School, "one of the homes of the working class in Latin America and the world", and said that "the greatest misery is not hunger, but the fact that they rob us of our horizon and prevent human emancipation." Virginia Fontes is a teacher, scholar, and was perhaps one of the first doctors that the MST had. She always used her knowledge and wisdom to multiply and democratize knowledge of many activists. We are very grateful for her contributions in our courses and in different educational areas, as a person standing in defense of workers. And for the necessity of radical agrarian reform.

Olivio Dutra said he was honored by the award, and that it is "moments like these that empower us for the challenges that lie ahead." Olivio Dutra de Oliveira is a social fighter created by the people of Rio Grande do Sul. A missionary, throughout his life he preserved the ideals of liberation of Sepe Tiaraju, also from that area. As a social fighter, he campaigned in the unions, helped build the CUT, the PT and had a regular presence in the social struggles of Rio Grande do Sul. The people recognized his leadership and he was Mayor of Porto Alegre and the State Governor. But for us he is mainly an MST activist.

For the theologian Leonardo Boff, it is an "undeserved prize, as there are many fighters who deserve to be remembered and honored." In his speech, he pointed out that "when struggle is combined with thinking, the movement is invincible. We will fight to the end of life to be beside you and defend our Mother Earth." Leonardo Boff is the son of peasants in the south. He was trained in the spirit of the Franciscans. A theologian committed to the truth, with the true God and the people, he faced the conservatism of the Curia. He did not back down and continued his tireless work. A thinker of life. A thinker who helps us think. A thinker who help us fight. He has always been with us in the struggles, joys and sufferings.

Professor Luiz Carlos Pinheiro Machado recalled that "all these years of struggle served to achieve the sovereignty and independence of the country to reach socialism", and reaffirmed the need for building unity between the forces of the working class.

Cristina Bezerra, from the Federal University of Juiz de Fora, highlighted "how much the university gained with the MST's entry into this area," and that the Movement, as well as the ENFF, "are our guides, and we owe it to them and we must commit ourselves to them." Cristina Bezerra is a university professor, an active fighter for the goals of the working class. She showed us how the social services could no longer be welfare to ease the evils of capitalism, and turn it into an instrument for freedom from capitalism. Her wisdom and ability to articulate allowed hundreds of young peasants, activists of agrarian reform, to attend Brazilian universities. And she applies as no one else does the ideas of Gramcsi, that all trenches of their struggle are important if we are on the side of the working class.

Sister Anne Caroline, of the Notre Dame Congregation, dedicated the award "to all those who support the MST," and noted that it is five years since the murder of Sister Dorothy, and said that we must confront injustice with love and not weapons. Sister Anne is a fighter of the Congregation of Notre Dame who chose Maranhão as her home. An international fighter for health, land, water, housing, work, culture, joy and love. A woman who advocates for children and young people, black people, indigenous and landless.

Luis Beltrame, the oldest landless peasant in the country at 106 years old.

Mauro Rubem is a social activist for the people of Goiás. Since his youth he has fought in the social struggles for the right to public health. He helped organize the MST, the unions, the Trade Union Centre (CUT) and the Worker's Party (PT). He had the recognition of the people to fill various public offices from councilor to congressman. He suffered threats and harassment for his fight for the cause of human rights and defense of the humiliated in our society. But above all, he always served as an example with his dedication, humility and commitment to the working class.

Marcelo Santa Cruz is a lawyer from Pernambuco, recognized as a champion of human rights and democracy, one of the founders of the

National Human Rights Movement. He actively participated in the struggle for amnesty for political persecution. Marcelo Santa Cruz is one of the members of the Commission on Memory, Truth and Justice. He has always presented himself as legal counsel of the MST and its members.

Luiz Carlos Pinheiro is a professor and researcher. A real scientist for the people who has placed research and science to serve the interests of the people. He is one of our precursors of the science of agroecology, a tireless protector of organic milk production techniques. He has always helped build knowledge and techniques, training technician activists so we could have a sustainable agriculture focused on the production of healthy food. He is an example of a scientist for the people. And we proudly consider him one of our activists.

Saulo Araujo is one of the founders and most active members of the Committee of Friends of the MST in the US. From his work in the

U.S. Friends, Saul has contributed to the MST and the struggle for agrarian reform in Brazil on several fronts. Doing political work within the empire is very difficult. But Saulo did not flinch and turned his life into the continuing practice of solidarity, the most beautiful quality of human beings. And this solidarity is practiced not only with the MST and the Brazilian people, but also with his help for La Via Campesina and for the people of Haiti. For this reason we are honoring him.

Comrades of the MST

We join with those present to celebrate the thirtieth anniversary of the MST and the tenth anniversary of the Florestan Fernandes National School.
You make a remembrance, which is an essential gesture to walk the path of history, assumed responsibly and self-critically. We gather these 30 years of MST challenges, victories, failures, witnesses of so many brothers and sisters who have given, with the experience of daily life and with a gesture of "greater love",  a decisive step towards the alternative society of which we dream.
It is time to take up the banner of a passionate MST and in the company of political, social and cultural forces which absorb the counsel of the of the sertão

You know that the "essential is the crossing."
With an unwavering hope we know that we are overcome by an invincible cause.
I ask for you, for all that are on the path, the blessing of the God of the Earth God, of Life and of Love.