MST in Bahia celebrates 35 years of struggle and resistance

Activities will be carried out in the center of Itamaraju and in the settlement 40/45, in Alcobaça, both municipalities in the extreme south of Bahia. 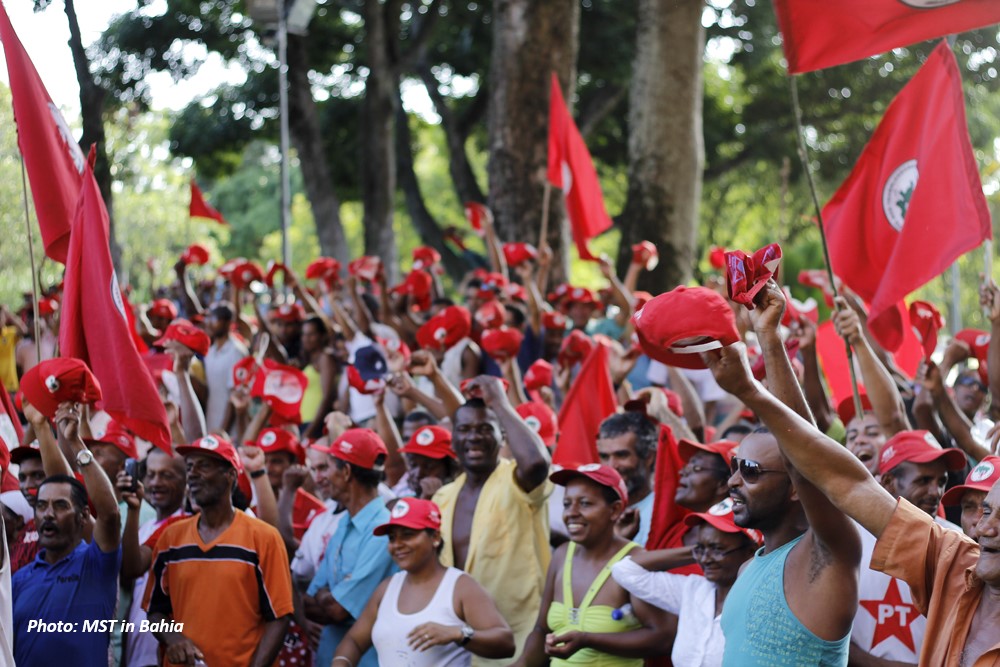 It is years of organization and struggle for land in Bahia that the Landless Rural Workers Movement has been leading in these three and a half decades, involving thousands of transformed lives, dreams fulfilled, others interrupted, however, a continuous effort of the organization towards the transformation of the society.

During this trajectory, a legacy was built in the struggle for land. The MST has more than 218 encampments and 156 settlements, which exceed more than 35,000 encamped and settled families present in 115 municipalities in the state. During the last two years of the pandemic, more than 40 tons of poison-free food were donated, produced by the families of each camp and settlement throughout Bahia.

During all these years, the MST has given voice to the peasant, as stated by Lucinéia Durães, from the national leadership of the MST in BA. “The MST is a movement fighting for land and in the concreteness of its struggle it especially helps us to give new meaning to the dream of living with dignity. The struggle of the MST in Bahia in these 35 years of history is marked by the voice of the peasant people throughout Bahia's territory, the voice of those who are sometimes not heard, who are on the margins of the peripheries”.

“Therefore, the MST is important for giving voice to subjects silenced by the large estates, giving possibilities to subjects who were once silenced by the violence of big capital, silenced by the tyranny of those and those richest subjects in the state. The MST is without a doubt a ray of hope in the lives of rural workers who seek to re-signify their dream of living with dignity”, completes Lucineia Durães, from the National Directorate of the MST in Bahia.

Celebration of 35 years of the MST in Bahia 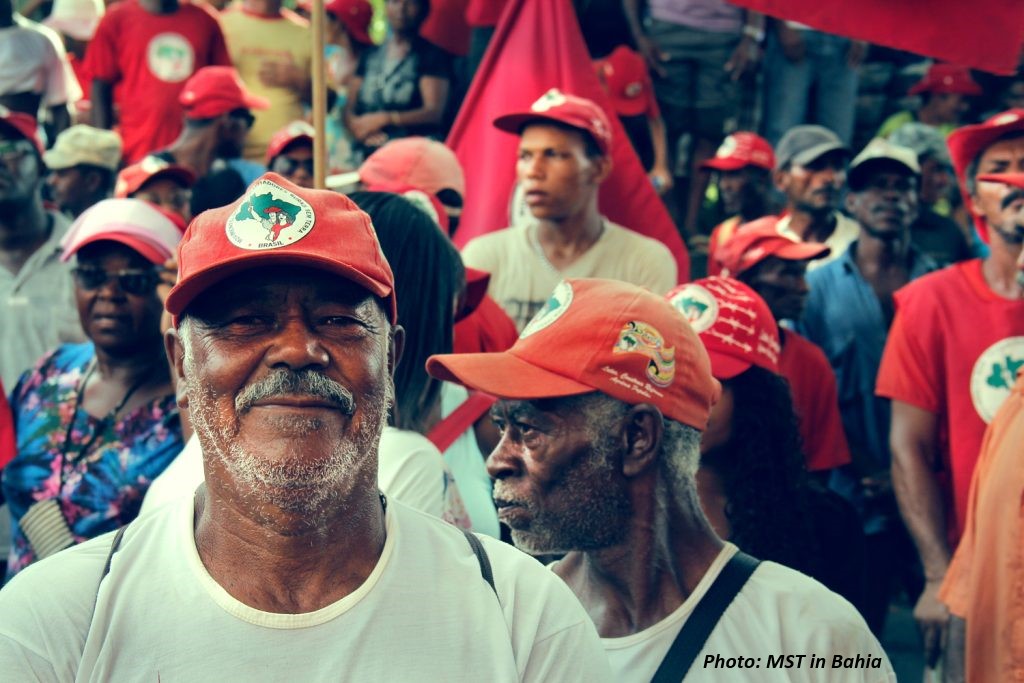 During the 8th to the 11th of September, many activities are being organized to commemorate the 35th anniversary of the MST in Bahia. Activities will be carried out in the center of Itamaraju and in the settlement 40/45, in Alcobaça, both municipalities in the extreme south of Bahia.

For Evanildo Costa, from the national direction of the MST in BA, “in these 35 years we will pay tribute to the fighters of Agrarian Reform, and this has an important meaning, especially in this conjuncture, where we need to maintain the legacy of rebellion and resistance of these men and women, because we mirror ourselves in past struggles and that gives us the strength to resist. This year alone, we carried out 16 land occupations in celebration of the 35th anniversary of the MST in the state”.

During the anniversary celebrations, the MST prepared an agenda full of attractions. In Itamaraju, on the 8th and 9th of September, the Agroecological Fair of Agrarian Reform takes place with products from the encampments and settlements in the region; Peoples Act: For land, roof and bread; Meeting of the Friends of the MST; and lots of mystique and shows with Chinela de Couro, Emerson Batista and Jarley and Banda.

The activities continue on September 9, 10 and 11, in settlement 40/45, located in the municipality of Alcobaça-BA.

During the days in the 40/45 settlement, political and cultural activities will be carried out, such as Workshops; Football tournament; horseback riding; Presentations by students from Eloi Ferreira School; Tree Planting Act; Celebration of 35 years with cake, ecumenical worship and gospel show, with Caio Nunes and Mari Costa. 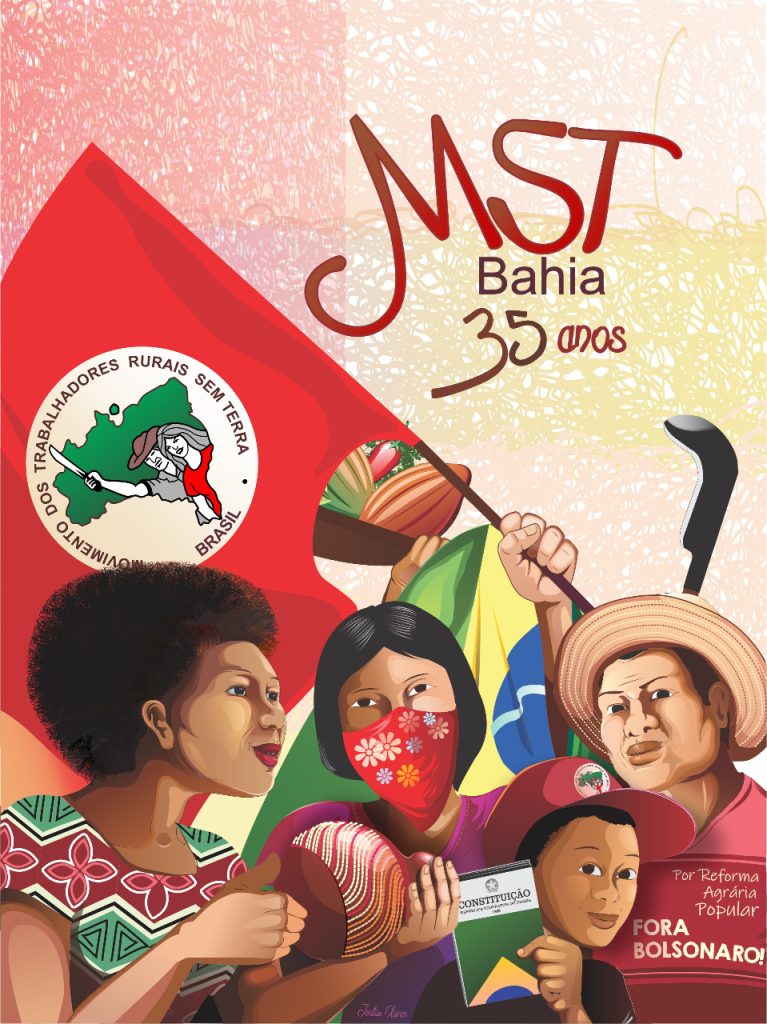 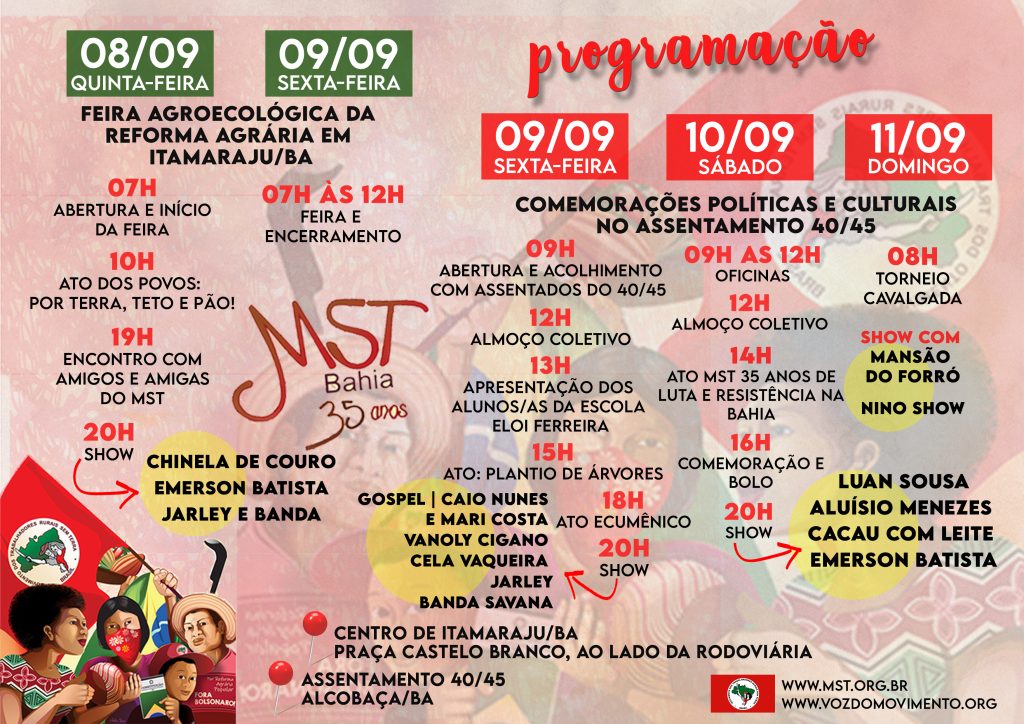 Political and cultural acts in the 40/45 Settlement