From October 8 to 16, actions were promoted in the five regions of the country, which included the donation of food from the Agrarian Reform, lunch boxes and meals, debates and online conferences, occupations, among others

In a scenario of advancing hunger in Brazil, with families in search of bones to feed themselves in some states, the use of more and more agrotoxins and the devastation of the environment by agribusiness, which has caused sandstorms among other environmental, social and economic problems, as well as the dismantling of agrarian policies by the current government, aggravating the crises that affect the lives of rural and urban workers, the MST held the National Day of Struggles “Landless Movement: Cultivating Solidarity” from October 8-16.

The aim was to provide a little hope to vulnerable families living on the outskirts of the country, through solidarity with the donation of healthy food produced in settlements and camps in the MST’s Agrarian Reform areas.

Antônia Ivoneide, Neném, from the MST Production Sector, said that the day drew attention to the need to cultivate solidarity in difficult times and increased the denunciation of hunger in the country and social inequalities, which have been worsened by the current government. In addition, it sought to show that there are several companies that profit from people’s hunger and food prices, such as large food companies and agribusiness, which produce for export and receive money in dollars.

“Our October day brought important elements, the first was the denunciation. To denounce that a country with large soybean and corn producers has many people going hungry, many people without food, without jobs, without homes, without a place to live. That was the case of Aprosoja [Brazilian Association of Soy Producers] that Via Campesina denounced. Therefore, we denounce companies that support anti-democratic acts, but that also profit from the people’s hunger, profit from inflation, from the price of food and from the government’s neglect of the people,” he denounces.

For Paulo Mansan, from the MST state directorate in Pernambuco, the balance of the MST’s “Cultivating Solidarity” day was the relationship the Movement established between production and donation of healthy food, demonstrating to Brazilian society that Agrarian Reform works.

“This food link is essential because society realizes that those who are helping, those who are starving are the Landless, the peasant family farmers, the Agrarian Reform settlements. While agribusiness is already selling abroad crops for 2022, 2023, 2024 in dollars, with the sole purpose of profiting, the Landless Peasants and family peasant agriculture are producing healthy food through agroecology and without the use of poison”, she points out. 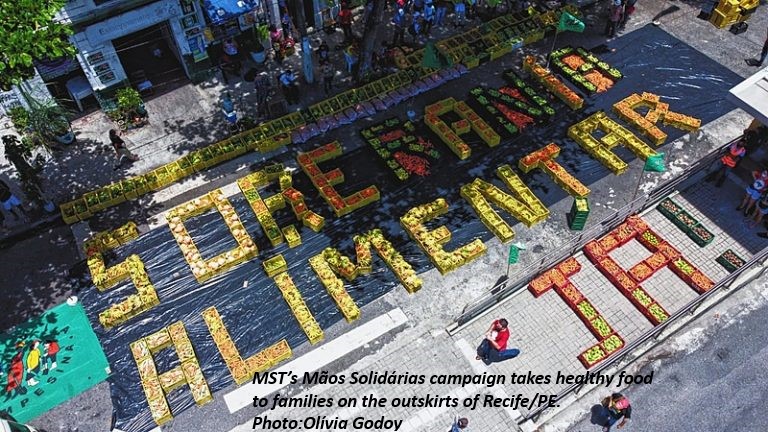 The National Day of Struggles Program remembered three symbolic dates for the MST, with activities in honour of Che Guevara from October 8 to 9; of the Little Landless (MST children), from October 10 to 12, cultivating solidarity in tribute to the legacy of Paulo Freire; and of the Struggle for Food Sovereignty, from October 13 to 16, with the Journey of Food Sovereignty: against agribusiness so that Brazil will not go hungry! with mobilizations and solidarity donations of healthy food to vulnerable populations in urban peripheries and around Via Campesina’s internationalist struggle for food sovereignty.

A series of actions were carried out in all five regions of the country, with the participation of Landless workers from the states of Alagoas, Ceará, Pernambuco, Paraíba, Rio Grande do Norte, São Paulo, Espírito Santo, Paraná, Santa Catarina and Rio Grande do Sul and the Federal District. The activities included food donations from Agrarian Reform, production and donation of lunch boxes and meals, debates and online conferences for food sovereignty and against hunger in Brazil, training and seed exchange, tree planting, IV World Meeting of Popular Movements with Pope Francis at the Vatican; occupation of agribusiness and large estate company headquarters, Agrarian Reform fairs; inauguration of solidarity recyclable material sheds in partnership with urban social movements; among other activities.

Hope made concrete in food

Another element recalled by Mansan is the hope that food carries and promotes in those who live with hunger. It is impressive how needy people are. Speaking of Recife, at every sign there is someone with a sign asking for food. People who are going hungry come to the street because it is a chance to have something to eat.

Neném explains that in addition to fighting hunger through solidarity actions, the journey has contributed to strengthening urban social movements and the mobilization of the landless base in the territories of Agrarian Reform.

“The fight against hunger brings not only the struggle for conditions to produce, to bring food to people’s tables, but also the solidarity process of donating food to the neediest populations. The great importance of this is the strengthening of urban movements, this articulation with the populations of the cities. But the journey also strengthens our base, in the articulation, mobilization, in the debate around hunger, food sovereignty, production of healthy food, the social function of land”.

The next step for the MST is to strengthen the process of mobilizing the Landless population in the settlements and encampments to increase food production, by growing collective and solidarity crops and organizing solidarity kitchens to make lunch boxes. The objective is to increase the donation of Agrarian Reform food to vulnerable populations in December, with the Solidarity Christmas Campaign, to fight hunger, indicates Neném.

“What is planned for Christmas Without Hunger is a large food donation campaign. The MST will work together with other organizations to donate food at Christmas. The idea is that we start this coordination now to organize this production process, so that in December we have enough food to donate,” he concludes. 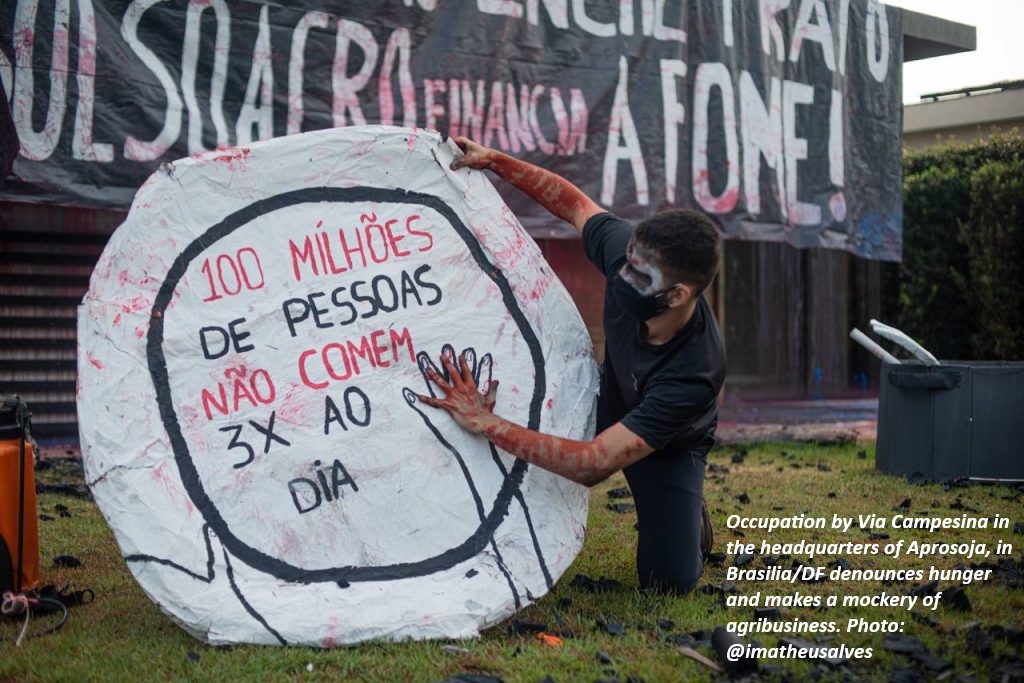 Considering solidarity as a political principle in the crisis scenario, since the beginning of the pandemic, the MST has donated 5,000 tons of healthy food and 1 million lunch boxes of solidarity to vulnerable and hungry populations across the country.