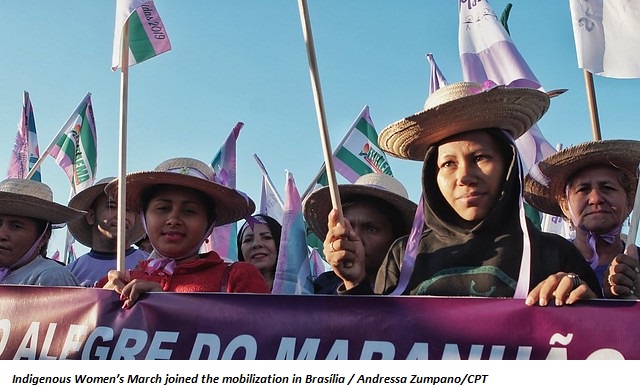 Maria Anecy Martins arrived in Brasília this week with glowing eyes to join the 2019 Daisies’ March. The 45-year-old small farmer is one of the 100,000 peasant women who joined the 2-day event that ended with a massive rally that took over the streets of Brazil’s capital.

The sixth edition of the Daisies’ March took place in Brasília on Aug. 13 and 14. The name of the event, originally Marcha das Margaridas, pays tribute to Margarida Maria Alves, a union leader in the northeastern state of Paraíba who fought for rural workers’ rights and was murdered by contract killers hired by big landowners in 1983.

Since 2000, organized female workers from rural areas, water communities, forests, and urban areas hold the Daisies’ March to continue Margarida Alves’ struggle, demanding workers’ rights and the end of land conflicts and all forms of violence and oppression.

Maria Anecy has been a farmer and a political activist for decades, but this was the first time she had the opportunity to join the march.

She traveled for more than two days from her home state of Maranhão, facing bumpy roads and the physical exhaustion to take part in the event, a symbol of people’s struggle in Brazil. But even after the long journey, she was so filled with excitement that nothing could drain her vibrant energy. 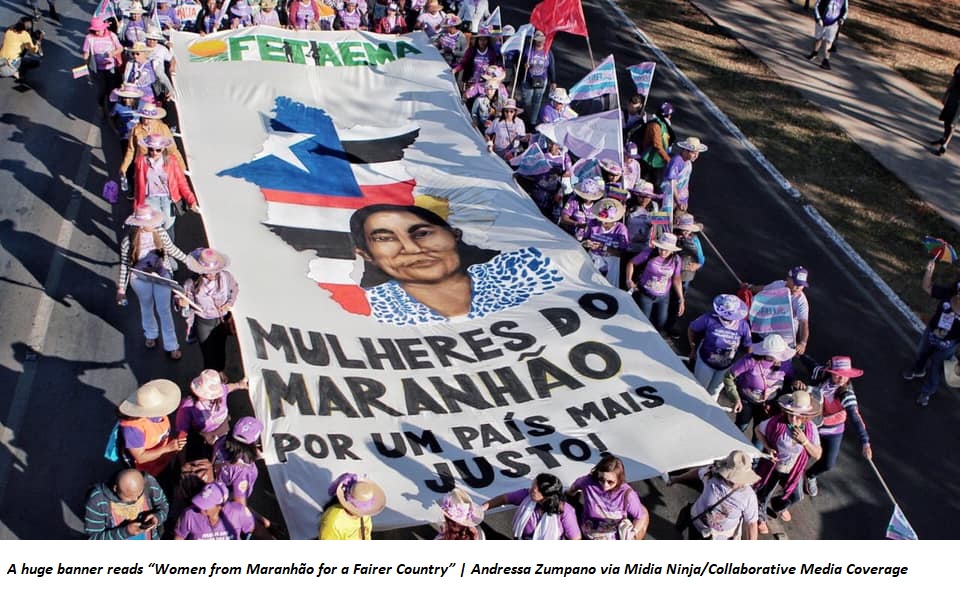 “I’ve always wanted to come, but couldn’t. I don’t have words to describe this. Seeing all those women united in pursuit of improvements and better policies, it gives me chills. I’m here to participate, to join forces with women. If you ask me if I am tired, no, I am not. When you see this and hear each conversation, they give you chills. It’s beautiful,” she said.

On Tuesday night, Maria Anecy joined nearly 30,000 people for the opening ceremony of the Daisies’ March, the motto of which was “Margaridas fighting for a Brazil with People’s Sovereignty, Democracy, Justice, Equality, and Free from Violence.”

The celebration gathered caravans coming from all regions of the country and representatives from around 25 countries of different continents, creating a mosaic of popular forces. Artists, members of Congress, and other political partners also joined the crowd. 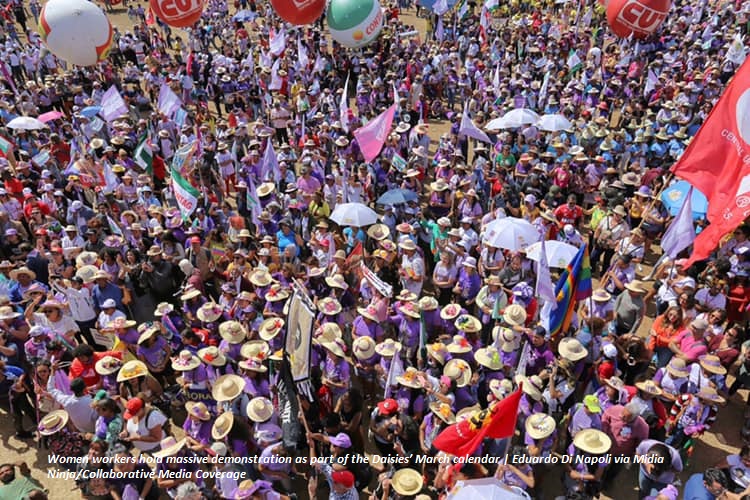 The event promoted a political debate based on a platform to push for rights including public education and healthcare, the fight to end violence against women, and the defense of the country’s pension system.

During the opening ceremony, different voices spoke about how important it is to unite women to fight gender violence and the setbacks faced under recent governments.

“The new emerges out of the people, of people’s power, and women are this people. This is for all of those women who came before us, Luizas, Dandaras, Marielles, Margaridas, and for a generation that will be free. We will not stop marching until all women are free,” the federal congresswoman Talíria Petrone said to the crowd.

The march happens every four years and traditionally gathers women from the countryside, the forests, and water-based communities. This time, the event was joined by participants of the first Indigenous Women’s March.

“I am so happy with the women’s demonstration. We have to fight for our rights, because, if we don’t do it, there is no way to solve this. We are together in this struggle and we will never give up,” said Nena Funi-ô, a participant of the indigenous march who came to Brasília from her hometown of Águas Belas, in the northeastern state of Pernambuco. 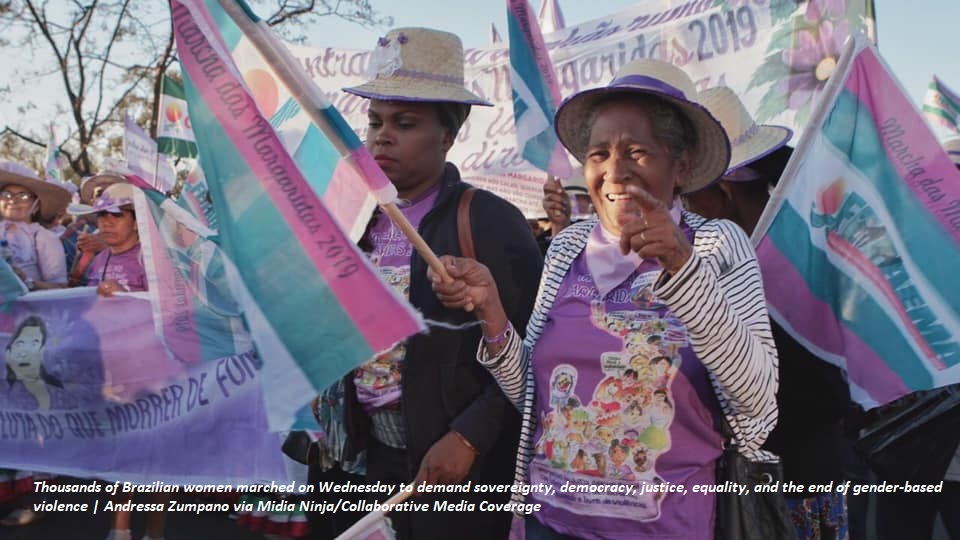 The sea of women who took over Brasília this week also surprised the men who take part in the event as spectators, like the history teacher Edson Cazuza. He joined the event for the second time and said he feels inspired by the massive mobilization of women workers.

“We’re living such a difficult time in Brazil these days, and women are in the trenches in this fight for democracy, social justice, and equal rights,” he said.

Excited about her first experience in a Daisies’ March, the small farmer Maria Anecy says that coming to Brasília will help to fuel the political articulation of people’s organizations in different states. 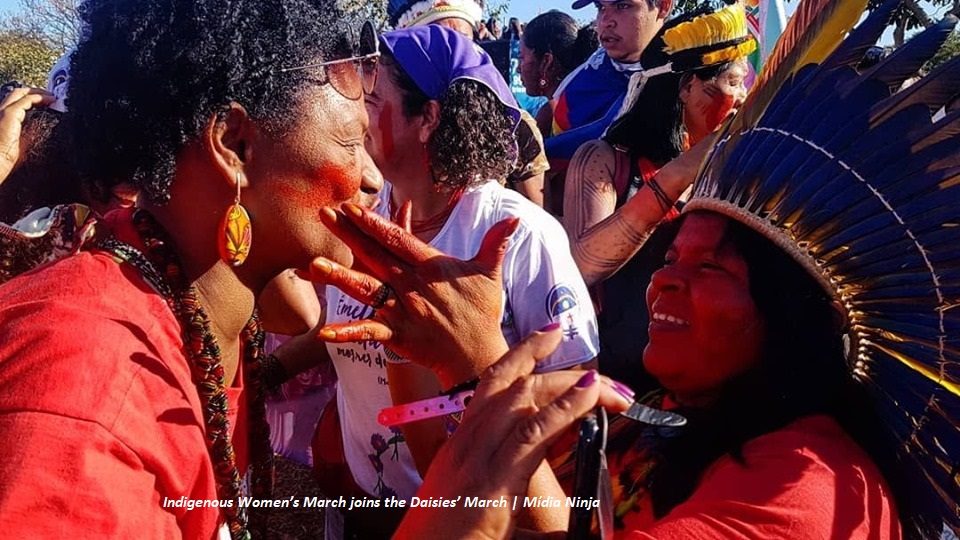 “I will come [to the march] as many times as possible, whenever I have the opportunity. I will take a little bit of these women’s good energy to the states, their conversations, their courage. We become stronger to go back to our community, our personal life, and the union movement as well.”

“I would do it all again. I am tired, I chanted and danced all day long. But it was worth it.” 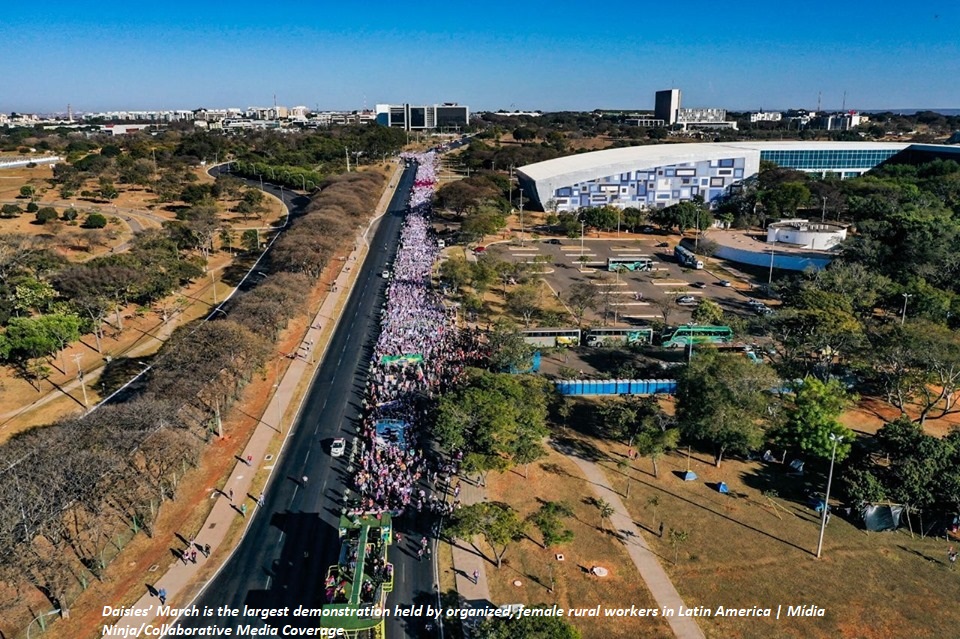